No more disinfectant we suppose 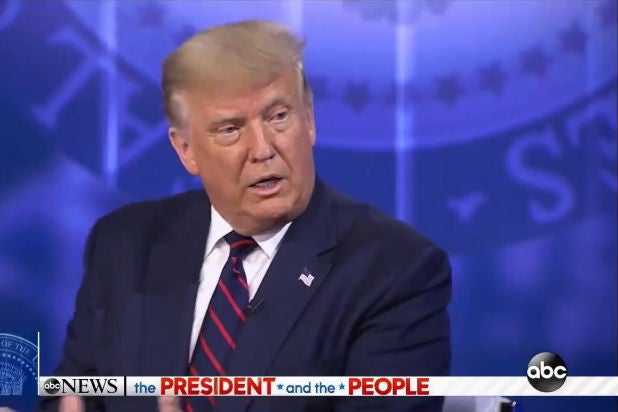 During a town hall on ABC hosted by George Stephanopoulos on Tuesday, Donald Trump suggested another weird-sounding solution to the COVID-19 pandemic that has already killed more than 200,000 Americans since March.

And while it wasn’t quite suggesting that maybe injecting disinfectant into people’s lungs could cure the disease — something Trump really, actually did last spring — it was still something of a head scratcher for a second there anyway.

During the townhall, Trump, as he has frequently done despite all the deaths, declared that the virus would just somehow go away. “Without the vaccine?” asked Stephanopoulos.

“Sure, over a period of time. Sure, with time it goes away,” Trump said.

Now in fairness, Trump was obviously referring to the concept of “herd immunity” and got tongue-tied. Herd immunity refers to the phenomenon that when a certain percentage of a population has either contracted a viral illness or has been vaccinated against it that it can no longer effectively spread and any outbreaks are extremely localized.

Herd mentality meanwhile refers to people adopting beliefs due to social pressure when they might make a different decision on their own.

Meanwhile, as for the chances of the pandemic being saved by herd immunity without a vaccine, medical experts don’t consider that to be a great idea. It’s estimated that to stem the spread of the virus, around 70% of the population would need to be exposed to COVID-19. And if that happens without a vaccine, it means all of those people would actually have to get sick. And given the current death rate for COVID-19, that means nearly 3 million people could be killed.

Come to think of it, that sound way worse than injecting disinfectant into your lungs. Wear a mask people. And watch the “herd mentality” clip below:

The BEST way to keep wasps away from your picnic revealed

Friends accused of torturing pal to steal his cryptocurrency