Success has many fathers, as the saying goes, but this is ridiculous. 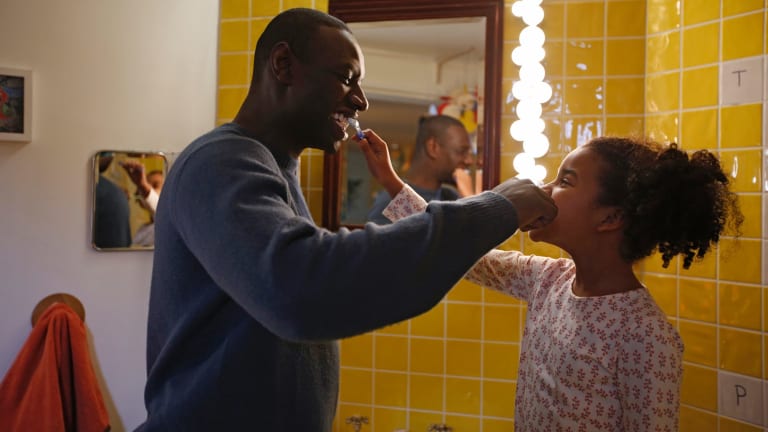 Cute than a box of puppies: Gloria Colston and Omar Sy bond in the bathroom

The 2013 Mexican film Instructions Not Included listed six writers. The film was belted by critics and made $US100 million.

Three years later, this French remake lists no fewer than seven writers – although two of them are from the Mexican original, which probably just means they got paid twice.

This version opened in France in December 2016 and took $US32.8 million, which puts it near the top of the pile of recent French films.

Which is not to say it's good – unless you like a grossly sentimental comedy about a single dad raising a kid who's cuter than a box of puppies.

The dad is played by Omar Sy (The Intouchables), who has perfected the difficult art of being a black star who doesn't frighten a white French audience. His charm is irresistible, but the film itself is icky. It's like eating a rich cake – each element tastes OK by itself, but together it's all too much.

There is plenty of evidence that I am wrong, not just in the film's box office. Charles Chaplin had a huge hit with virtually the same story in The Kid, the second-highest grossing film of 1921, opposite Jackie Coogan.

Chaplin's Tramp found an abandoned baby and was reluctant to take on the responsibility. Here, Sy refuses the same duty. His reactions suggest a sort of theme – how parenting can reform a playboy.

Samuel (Sy) is a stud muffin in the south of France. When Kristin (Clemence Poesy) thrusts the new baby into his arms, he has just had a wild night of love with two beautiful young women on the boat he manages for a rich woman (Clementine Celarie).

Samuel barely remembers Kristin, who pleads that she is unfit for motherhood. He pursues her to London, holding the baby.

I never quite worked out the reason, but the writers keep him there, raising the moppet in England, rather than France. A loud-mouthed, bilingual film producer called Bernie (Antoine Bertrand), who's gayer than laughter, becomes the child's second father.

So now we have two men and a baby – almost like that French hit from 1985, Three Men and a Cradle, which was itself remade (twice) in America.

Even after eight years, Samuel can't speak English so the kid (played by Gloria Colston) has to translate for him, which offers the film some opportunity for cross-cultural comedy, and frequent switches between French and English.

Perhaps the producers were trying to internationalise the appeal; perhaps the London settings are exotic for a French audience. Je ne sais pas.

I do know that the film is one of the most mechanical and cynical pieces of commercial guff I have seen in a long time. It's also fairly nasty, when Kristin returns after eight years to claim the kid.

Custody battles don't really make for great comedy, but the team behind this seems not to notice nor care. It's the movie equivalent of fast food.

Key workers to be tested for Covid-19 twice a week

Glam Up Your Face Mask Game With Vistaprint's Artist Collection