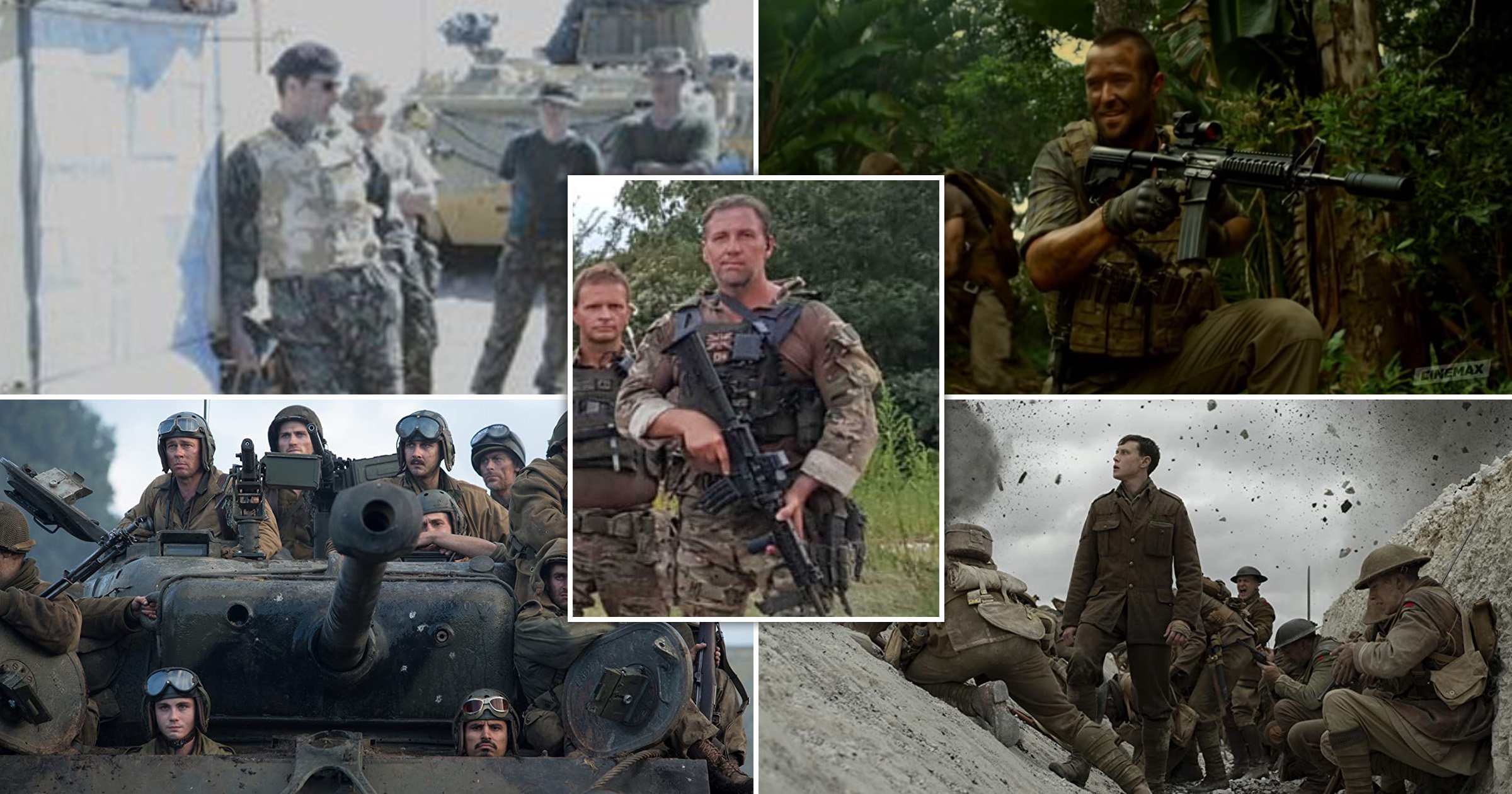 ‘I did not plan to work in the film industry – I just sort of fell into it after giving the director George Clooney advice while I was an extra on his film The Monuments Men in 2014,’ explains Paul Biddiss to Metro.co.uk about his second career as a military advisor in the film industry.

Prior to this, he served for 27 years as a paratrooper in the British Army and worked as a private investigator and bodyguard.

Since that fateful day, he has worked on productions such as Fury with Brad Pitt, War And Peace, Jason Bourne, Strike Back and 1917.

As with any specialist aspect of film and television making, military consultants are brought in to help deliver training, guidance and support for the production team in relevant scenes.

On plenty of sets, projects have turned to real-life veterans, who have embarked on second careers in the film industry, for insight and advice on keeping their productions as realistic as possible.

‘You know what’s right because you’ve seen it,’ says Lieutenant Colonel (Retd) Richard Trant, who served for 27 years in the 16th/5th Lancers and the Queen’s Royal Lancers before his current role as MD at Services To Film.

Services To Film is a veteran-owned organisation that provides extras and advisors with military backgrounds for film and TV, as well as teaming up with ScreenSkills and the National Film and Television School on initiatives to place veterans in technical industry positions.

Trant’s work as a consultant spans The Crown, Downton Abbey, Military Wives and Belgravia, among others.

Speaking to Metro.co.uk about why the ‘authenticity’ veterans bring make them good on-set advisors, he continues: ‘I think a veteran has an eye for detail, which is sort of drummed into them during their basic training, but equally all through their service, about what looks right – both in terms of the physical look, but also how to actually behave when you are in a contact battle.’

He adds: ‘The tranche of veterans that we have coming through the business at the moment, a lot of them of them have a significant amount of military experience and operational experience from the first Gulf War, the Balkans, Afghanistan and Iraq. They know what it’s like.’

‘You have to be able to articulate to an actor the thoughts and feelings of a soldier as he potentially faces his death,’ says Biddiss, cutting to the chase. ‘It’s about much more than knowing how a rifle works.’

He highlights the practical, time-saving former armed forces members offer too, explaining: ‘We also know what we’re looking for so we can help departments get the right equipment without them having to spend hours or days on Google not fully understanding what they’re looking for!’

The role of military consultant varies from project to project, but according to Trant can include providing training on weapons handling, marching and vocabulary, as well as ‘more complex skills such as working as formed assault teams in complex terrain’. Meanwhile, historical research for a past period project ‘became a reference document for the props, costume and set-making teams’.

Different relationships between directors and producers and their advisors can change the amount of input they have when it comes to story or screenplay, and Trant describes the ‘dialogue’ between them all as ‘really, really important’.

He adds: ‘I think veterans are able to relate to all sorts of people and so understand that the principles behind making or delivering a production must come first, although providing gentle and persuasive input is really, really valuable.’

For Biddiss’s work on Sky One action series Strike Back, he was in fact in the writers’ room ‘helping to make the stories authentic and create mission scenes from scratch’.

Stating that he is ‘ideally brought on to a production as early as possible, he continues: ‘When I have the script, I advise the costumes and props departments on military uniforms and equipment. Then I train the cast and supporting artists in how, for example, to use weapons realistically and safely. I run bootcamps to train cast, stunts and extras in all military aspects related to the script.’

One of the major strengths of military advisors who have service and operational experience is perhaps best seen in the way they help to depict scenes in war films both accurately and sensitively.

‘Whatever conflict you’re trying to deliver has got to be sensitively understood and related to,’ says Trant. ‘For the audience, so many of them don’t have an understanding of what it’s all about. And if you want to really deliver an authentic feel and look for something which is historically based, when you’re looking at World War I or World War II, or even a scene from, say, the Napoleonic era, it does need to be sympathetically and realistically and authentically delivered.’

Fury saw Services to Film provide military advice for the first time, rather than just extras, and the organisation called in Armoured Corps veterans to man the tanks and crew the weapon systems, as well as two ‘young 90-somethings’ from the 13th/18th Hussars, who had served during and just after D-Day.

He explains: ‘They had intimate knowledge of how the Sherman tank was used, both as an individual vehicle but also collectively as troops and squadrons and such like.’

Coming from a ‘big military background’, Biddiss was able to tap into a family link with World War I for his work on Sam Mendes’ 1917, of which he is ‘hugely proud’, despite the pressure.

‘One of my distant relatives died in 1917 on the advance to the Hindenburg Line. If one of the extras had screwed up, everyone would have been looking at me.’

He also got ‘a buzz’ from working on The Crown for its season two episode depicting the Suez Crisis, with which his late father was involved as a young paratrooper.

‘It was a buzz to think I was coordinating history my own dad was involved in, but I always pressure myself to get as much detail right, as much as I can.’

When asked what they hope audiences take away from watching war films, Trant highlights viewers putting themselves in the shoes of those on screen and ‘considering how they would react’.

Mentioning that military service is ‘an experience few have had the opportunity to have’ he also adds: ‘In my view, and having seen all sorts, ages and types of people serving in difficult circumstances, the generations change but the spirit stays the same; people will do extraordinary things for their mates and team when it’s their turn, no matter who they are.

Biddiss acknowledges: ‘You’ll never get everything 100% correct, but you do your best and you hope audiences understand the hardship of warfare and military life.

‘On 1917, Sam Mendes said he was making the film for an audience of millions, he did not want it to be gratuitous to satisfy a few nit-pickers – and I agree with that. Military advisors are there to help make entertainment in a sensitive way, but it’s not a documentary.’

When it comes to a production’s authenticity in depicting historical battles, Trant admits it can be ‘tremendously difficult’.

‘A tiny slip in authenticity can spoil a scene, so this is the challenge productions and military advisors face. The depiction of battle scenes and the hidden emotional pressure on families back home are incredibly important to get right. Productions will often be judged on these aspects being correct. As a member of the veteran community, I think we also expect such detail to be correct.’

Biddiss reveals that other challenges to accuracy can come from more practical issues, such as when and how much time a military advisor can spend on set.

‘The worst challenge is when a production brings you onboard to train the cast the day of the shoot but hasn’t got the money to get you in a few days before to prepare an actor or keep you on set for the days military scenes are shooting. It’s so frustrating when they get the details so wrong during filming because there’s no military advisor on hand.’

He continues: ‘Sometimes productions don’t understand the value an advisor brings – we can save them money by helping them to avoid reshoots, but it’s only when too late that I get a call to help make things right.’

When it comes to the best depiction of conflict on screen, Trant is a fan of Steven Spielberg’s Saving Private Ryan, starring Tom Hanks, as well as Fury, for ‘hitting the right notes’.

He’s also proud of Services To Film’s work on 2019’s Military Wives, a film about the real-life Military Wives Choirs network, which has sprung up in recent years as a hobby and support for the partners and loved ones of service members, particularly when their family members are away on deployment.

He describes the film’s emotional death notification and funeral scenes as ‘very real, visceral depictions of the other side of the coin that these endeavours precipitate’.

For Biddiss, alongside naming 1917 and 1985 BBC TV paratrooper drama Contact as productions that have portrayed conflict well, the consultant namechecks Blackadder Goes Forth as ‘a very good depiction of men about to go over the top’.

‘It was a comedy, but I think that last scene nailed it.’