will.i.am has said that he’s ‘heartbroken’ over Kanye West’s recent comments on slavery.

Kanye provoked widespread outrage when he appeared to suggest that slavery was ‘a choice’, and the Voice UK coach has now spoken out.

Talking to Good Morning Britain today (May 2), will.i.am said: “That broke my heart, because I thought about my grandma, who was born in 1920, and her connection with her mom who raised her, who was born in the late 1800s.

He continued: “So I understand the need to have free thought, but if your thoughts aren’t researched, that is just going to hurt those that are still in conditions where it’s not choice, that when they go down the street and there’s a liqueur store and fast food restaurants and your education is not being funded the same way that it is being in Calabasas, when governments stifle and limit the amount of money that goes to Chicago, Bronx, Watts, 5th Ward, Mississippi, East Los Angeles, where I’m from.

“That statement was one of the most ignorant statements that anybody who came from the hood could ever say about their ancestors, that slavery is a choice. What are you talking about?!

“To me, that’s a different person that’s saying that, and I hope it’s not to raise awareness so you could sell some records and some shoes, because that would be the worst thing to do, to stir up this very touchy race situation and you be the benefactor from it.

“So I encourage you, if you really believe this, give your shoes away for free, give your album away for free. And I don’t like talking about going against my community, but that is harmful.” 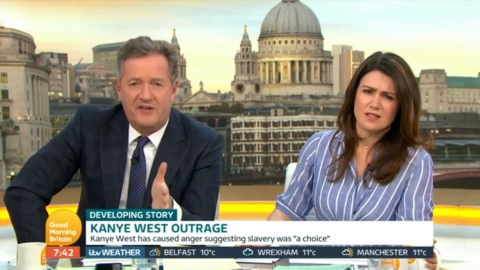 GMB was also forced to cut a guest’s microphone today (May 2) after he spewed racist and homophobic comments.

Pastor Jesse Lee Peterson and Trisha Goddard were invited to appear on the show to discuss the Kanye controversy – but Peterson went into a hateful rant which left Trisha and GMB presenters Piers Morgan and Susanna Reid stunned as they hit back at his words.

Jessica Lange Is Returning To American Horror Story in Season 8

‘The Voice’s Carson Daly: The Season 15 Blocks Will Be ‘Some Of The Greatest Moments’ Ever

Emmy Dream Ballot: The Limited Series and TV Movies Worth Considering in 2019