Following his tragic death earlier this week, The Walking Dead‘s Scott Wilson has been honoured by several of his former colleagues.

Danai Gurira – who portrays sword warrior Michonne on AMC’s zombie series – posted a touching tribute to her ex co-star, who appeared as Hershel Greene from 2011 to 2014.

She wrote: “It is almost impossible to describe how I feel about this man. He was beyond a hero, beyond a gem, he was the dearest treasure one could hope to know. I am so thankful to have had the honor to work with him & to call him my friend. RIP Mr Wilson, your light has enriched us all.”

Meanwhile, TWD showrunner Angela Kang has remembered Wilson with a nostalgic photograph looking back at a season two filming day. The image features herself, Wilson and Jeffrey DeMunn together on set.

Announcing Wilson’s sad loss to leukaemia earlier this week, an AMC spokesperson shared: “Scott will always be remembered as a great actor, and we all feel fortunate to have known him as an even better person. The character he embodied on The Walking Dead, Hershel, lived at the emotional core of the show.

“Like Scott in our lives, Hershel was a character whose actions continue to inform our characters’ choices to this day. Our hearts go out to his wife, family, friends and to the millions of fans who loved him. Scott will be missed.” 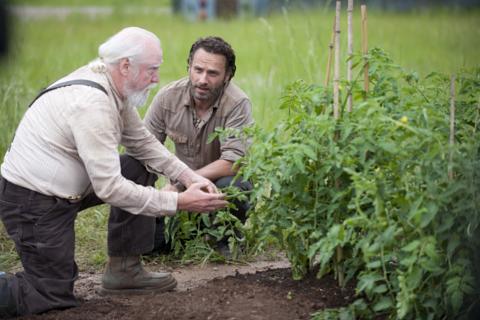 The recent opening episode of season 9 featured a tribute attached to the end credits, depicting a picture of Wilson and a short but sweet commemorative message.

The Walking Dead airs on AMC in the US, and on FOX and NOW TV in the UK.

'Gilmore Girls': How Many Calories Did Rory and Lorelai Gilmore Eat on a Typical Day?