Andrew Lincoln is quitting as Rick Grimes in season nine of The Walking Dead, and the show’s executive producer Robert Kirkman has confirmed that there is “something amazing planned” to mark his exit.

However, a new fan theory from reddit user superbat33 argues that Rick could make a triumphant return. (Yes, we know he hasn’t even left yet.)

“Andy Lincoln in a recent interview said that the topic of Rick leaving came up with him and Gimple during the middle of season 4,” superbat33 writes. “Then, at the end of S4, you see Rick going into train cart marked A.

“You also see the Termites marking Gabriel’s church where Rick is, A. Sam giving the ‘A’ stamp to Rick… And I might be missing some more A nods, but that’s what I remember off the top of my head.”

superbat33 continues: “But the biggest clue is that we see in the trailer that the HELICOPTER is marked with an A.”

Therefore, they argue that Rick “will be hurt or in a coma and the Helicopter folks are going to take them to wherever they are staying”. 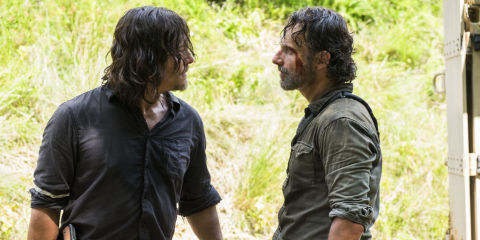 The user suggests: “Furthermore this would be a great way to start another spinoff like Gimple was talking about and maybe they could film it in Europe and Andy can have short term role similar to Morgan in Fear and then they finally end Rick’s story, or maybe in a couple years when they finish this current TWD, Rick can come back like [Steve Carell] did in The Office.

“THE NEW WORLD IS GOING TO NEED RICK GRIMES.”

Meanwhile, Lincoln addressed his impending departure from The Walking Dead for the first time when the TWD cast gathered in Hall H at Comic-Con International.

The Walking Dead airs on AMC in the US, and on FOX and Now TV in the UK.

What These Former NCIS Stars Are Doing Now