The Sun columnist is at the helm of the epic game show for its week-long revival to celebrate its 20th anniversary. 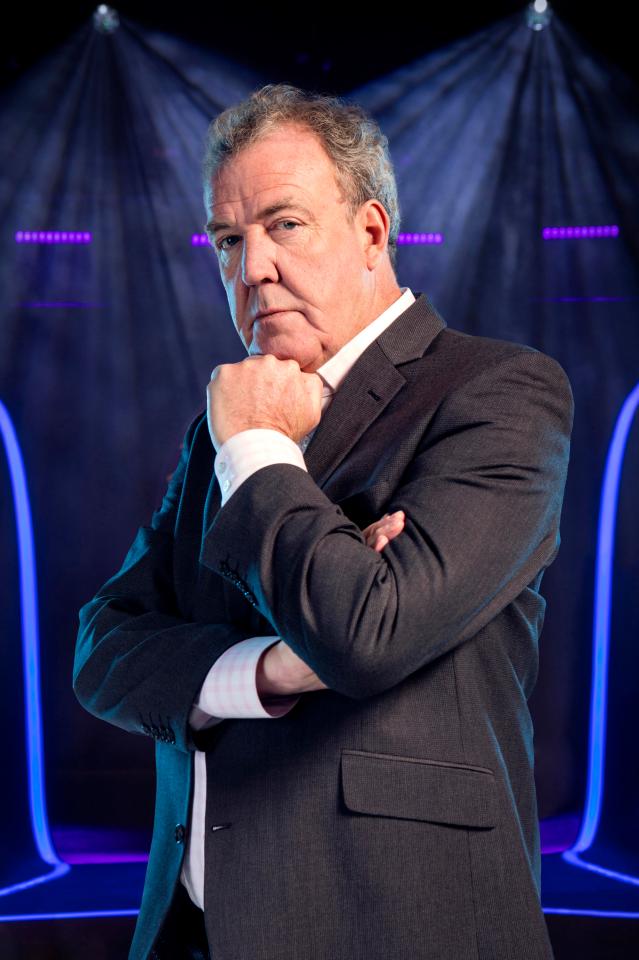 It is a significant departure from his usual car-based antics with Richard Hammond and James May on Amazon’s The Grand Tour.

Jeremy will be asking contestants multiple-choice questions as they bid to take home the £1million jackpot. Their prize money increases with every question and they can cash out at any stage.

But while they have previously relied only on their own knowledge and three lifelines — Phone A Friend, 50/50 and Ask The Audience — to see them home, they can now Ask The Host, too.

Unfortunately, the host is already feeling the pressure.

Jeremy, 58, said: “I was doing a run-through with friends the other day, desperately trying to practice, and it got to Ask The Host.

“Now one of the things I’ve been practising in the bathroom mirror is the face you pull in that situation. I could end up costing somebody a lot of money by being bombastic.

“The truth is, once somebody has gone past even £100, I mustn’t lose sight of the fact they’re playing for large sums of money. 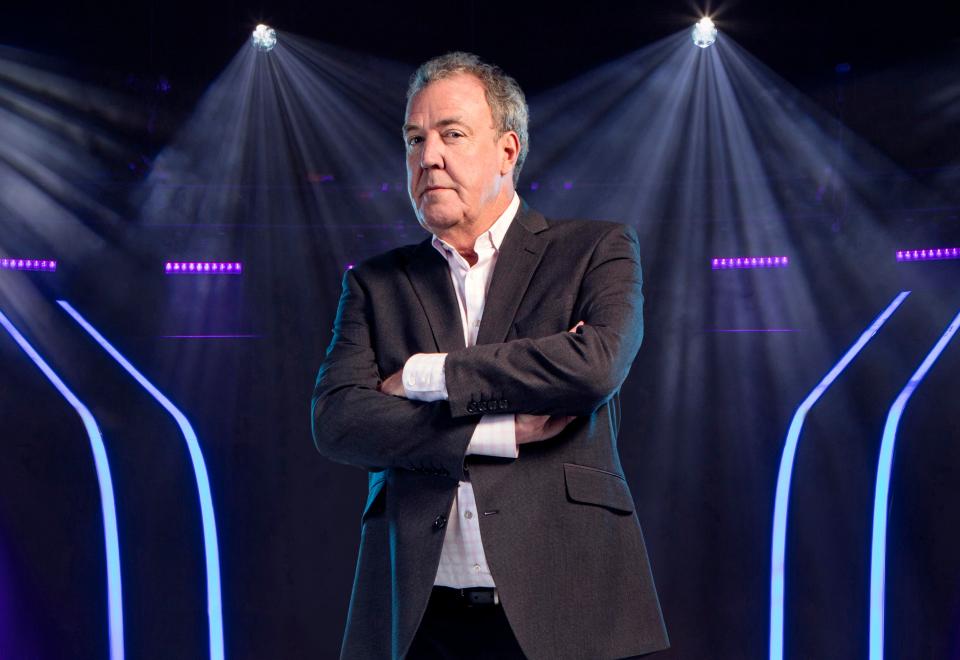 “I can’t really cock about to the extent that I would do if it was another show and they were playing for a ‘coveted trophy’.

“If you’re playing for £2.75 and a crummy trophy, then yes, you can mess about. But once they’re up into big money, I can’t be standing there pulling clown faces.”

Its original run was fronted by Chris Tarrant from September 1998 to February 2014, peaking at 19million viewers.

The quiz also spawned a number of international versions, including in Afghanistan, Iceland and Russia. The Indian edition featured in Danny Boyle’s 2008 hit film Slumdog Millionaire. 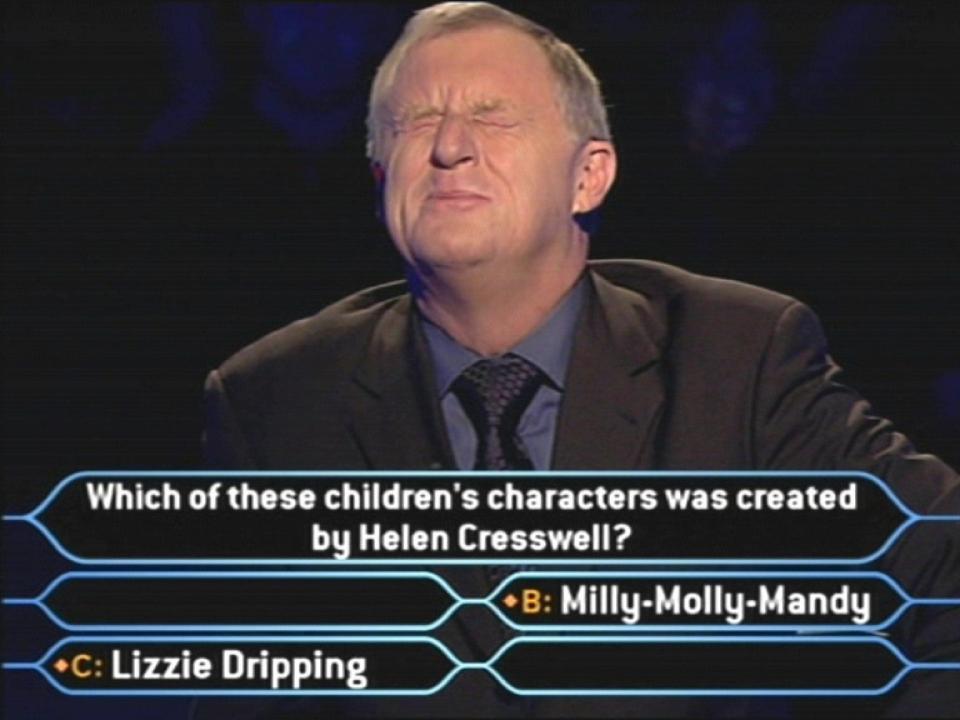 Jeremy is used to seeing star names take the reins of popular television shows, only for them to fall flat.

He said: “Yeah, I have said taking over the show well-known for one host and then doing another doesn’t always go well.

“It is difficult following Chris Tarrant on Millionaire because he was bloody good at it.” 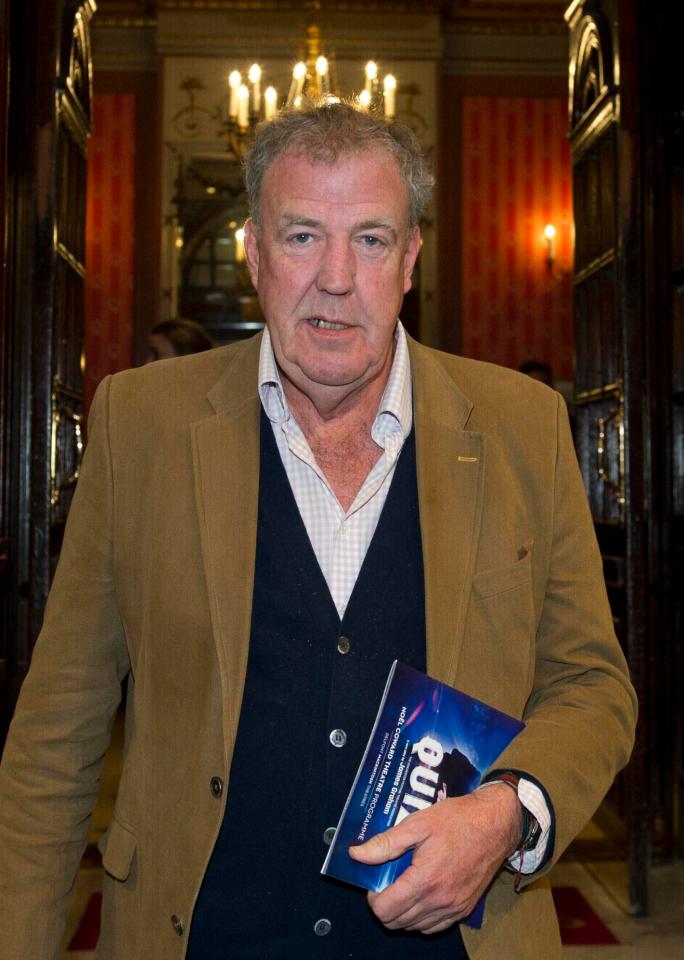 I joined Jeremy on the brand-new set of the game show at Media City in Salford Quays, Manchester.

While he may be known for his bullish nature, Jeremy is clearly anxious as the audience begins to shuffle in for his first proper practice run.

He said: “I’m really nervous. I honestly thought it was just a question of saying, ‘What’s the capital of Peru?’ and then waiting for the klaxon.

“Honestly, I’ve never known a show as technically complex as this. I’ve been watching hundreds of hours of Chris doing it and you just don’t see what he’s doing.

“God almighty, I mean, I suppose you get used to it over the years but the amount of sound effects and visual tricks that you have to wait for . . . and you can’t talk naturally because there’s an endless stream of complexities which I’m not used to.”

Jezza is also having to get used to autocue and, with Millionaire being on ITV, taking breaks for adverts.

He said: “I walked out and it was like ‘hello and wel-woll…’

“The autocue was so far away they may as well have put it in Birmingham. I couldn’t read it.

“Then I couldn’t see the TV screen and then I noticed the contestants were unnaturally far away, and if they’re softly spoken with that ‘dum dum dum dum’ playing, then I will neither see them or hear them.

“Which, I’ve got to be honest, as a host does make me think they’ve chosen the wrong one.

“There’s no opportunity for not behaving yourself in this.

“People want to see questions being asked and answers being given, and if I start as the host saying, ‘Oh I’ve got a personality’ they should have got Joe Pasquale or something. Or is he dead? Somebody like that. 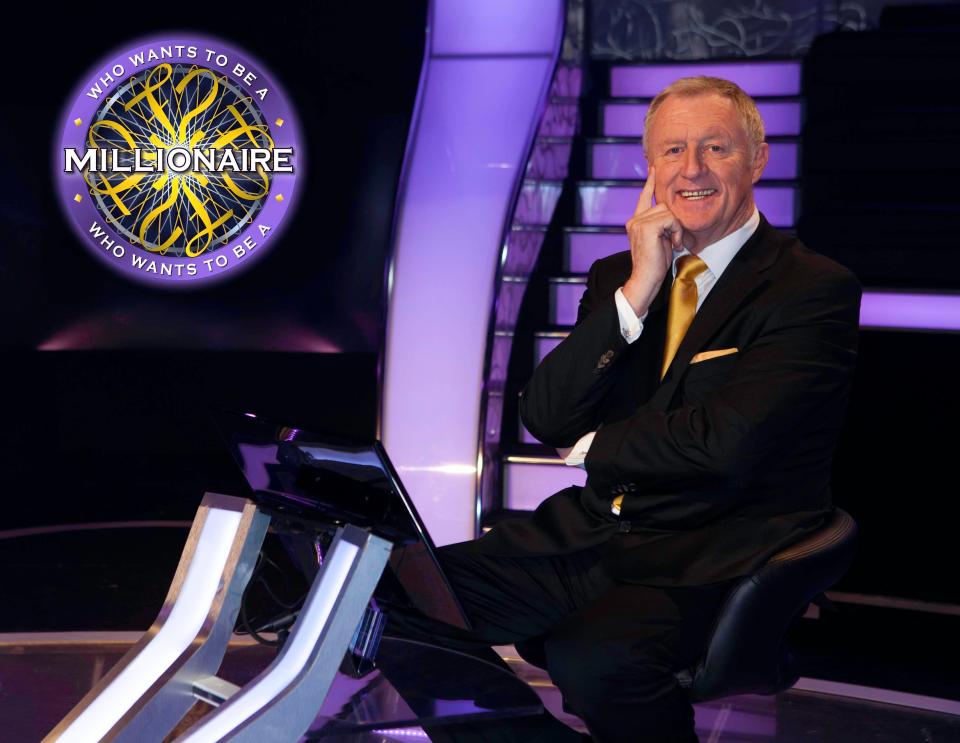 “I’m not here to put my personality forward when I’ve not even got one.

Over 30 series and 591 episodes of the quiz, only five winners have gone home with £1million.

The first was Judith Keppel in 2000 but one of the show’s most famous moments came a year later when Major Charles Ingram, later known as the Coughing Major, cheated his way to the jackpot. He and his wife, Diana, who previously won £32,000 on Millionaire, hatched a plan with audience member and fellow game show enthusiast Tecwen Whittock to cough to help steer Ingram to choosing the right answer. 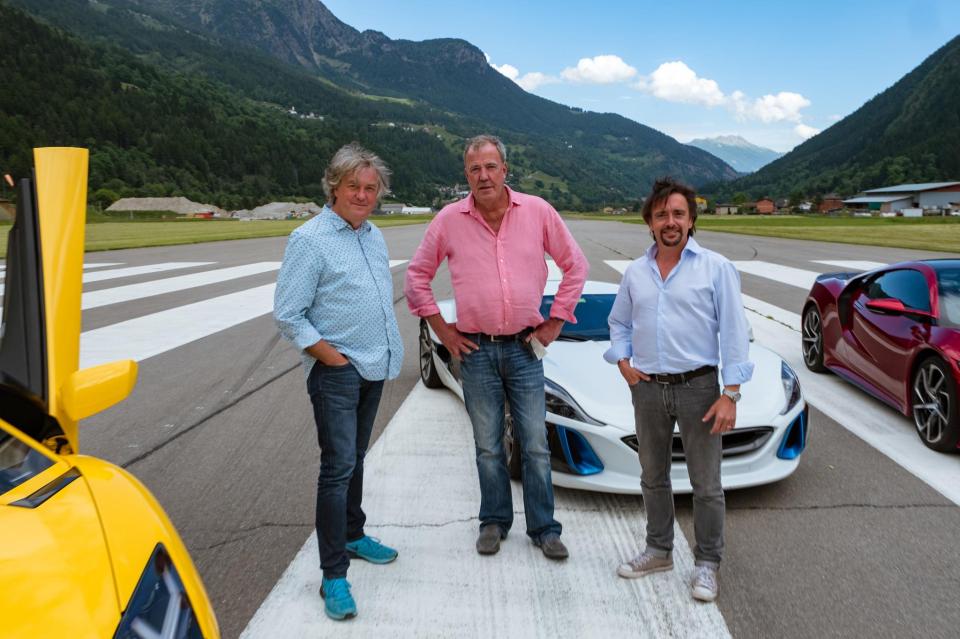 Ingram was stripped of his prizeand given a suspended prison sentence.

But Jeremy admitted it would have gone right over his head, saying: “I wouldn’t have heard it because I’m deaf as a post.”

Before we met, I assumed quiz shows would be Jeremy’s idea of hell but it transpires he is a huge fan of BBC1’s Pointless, hosted by Alexander Armstrong and Richard Osman.

Jeremy said: “It is a superb show and I really do stop work between 5.15 and 6 every day. 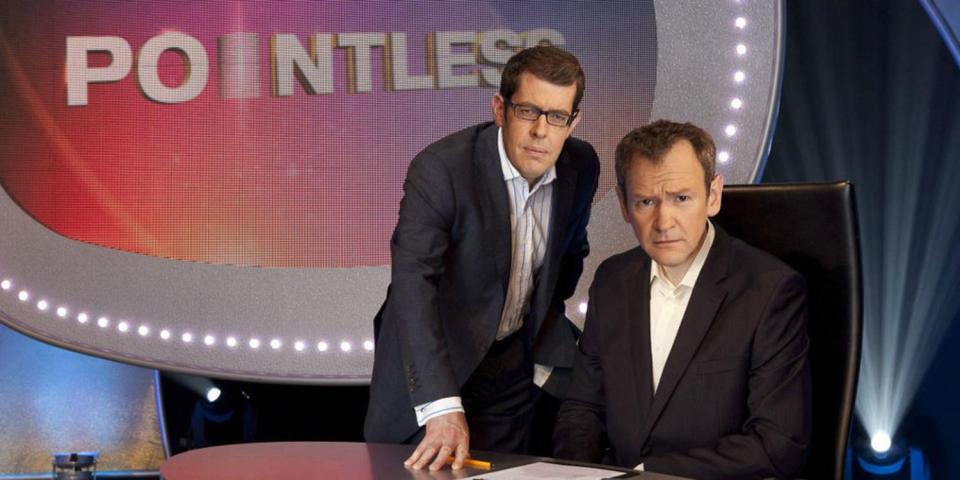 “Just before the BBC comes on to tell me how great Mr Corbyn is. And then I can get it off. ‘Today Mr Corbyn was superb’. ‘Oh shut up’ . . . ‘Here’s Sophie Raworth to tell us how marvellous Diane Abbott is’.”

His unexpected love for game shows means he has had to fight back urges to play along with the contestant sat opposite.

“There was one where I was thinking. You find yourself thinking, ‘Which one is it?’ And then you have to go back into host mode and go repeating it and asking the questions. 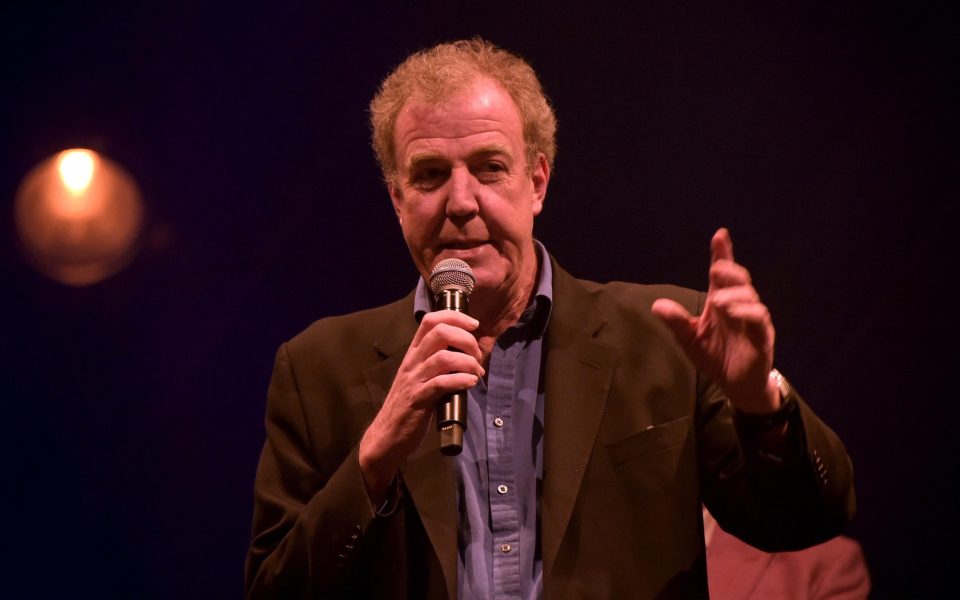 “But actually there’s huge chunks of my knowledge. I despise anything by Shakespeare and will know nothing. Can’t be doing with Dickens, Milton, hate poetry, know very little about art, good on capital cities and mountain ranges though. In my travels over the years I’ve been most places, that helps.”

Despite being worth an estimated £30million and with the pressure of Ask The Host, Jeremy will not be dipping into his pockets if he ends up helping a contestant lose money.

He said: “That has occurred to me. And then I remembered I was from Yorkshire. ‘Oh wait a minute, I’m mean aren’t I!’”

I WAS LEFT IN A RIGHT OLD STEW

I’VE always thought I had a reasonable general knowledge – playing along to quiz shows and screaming at the telly when the contestant can’t answer, writes Andy Halls.

But as soon as I sat in the famous Millionaire chair, my brain just went to mush.

We had just five minutes to try out the new set before the audience shuffled in for the real shows.

We started with the £1,000 question and two lifelines.

Jeremy asked me if I knew what type of food gumbo was..

Despite having eaten gumbo, I still couldn’t remember if it was a stew, bread, pie or soup.

In the interests of getting the full experience I thought I’d test out the new lifeline – Ask The Host.

He said: “It’s a risk you have to take. Does Jeremy Clarkson know that?”

Fortunately, he did. Jeremy was less worried about the ribbing I’d get for going out on question one – and gambled, answering correctly: Stew.

I joked: “Team effort?” before Jeremy added: “Not strictly a team effort, it was entirely me. Let’s be crystal clear.”

So on question two I opted for the more decisive approach.

When I was asked: “Which country is home to the car brands Daewoo and Kia?” I was sure I knew it.

Sadly, I did not. As I confidently went for China, rather than the correct South Korea, Jeremy added: “This is being recorded. It will end up online. If it were wrong, people will mock you.”

And unfortunately, they did – starting with the big man himself.

As he quickly shuffled me out, so someone else could embarrass themselves on the big stage, Jeremy said: “He had two questions. He used me to answer one of them.

“Then he got the next one wrong. You’ve made a total t*t of yourself. But you do go home with £1,000, which you had before we even started.

“Try to keep your giggles to yourself. Now get out.”

THE show brimmed with characters, incident and scandal in its 16-year run.

Here are just a few of the best… 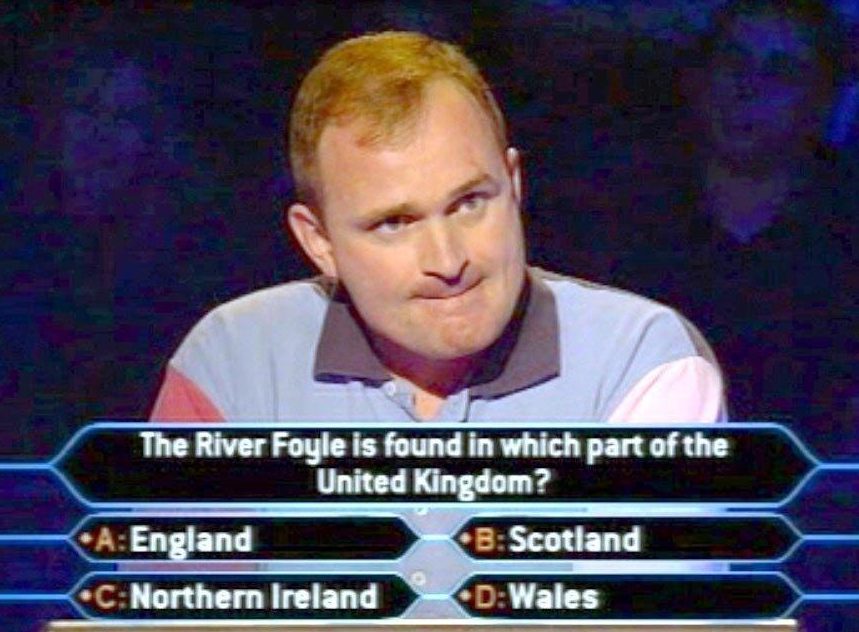 EX-Army major Charles Ingram had to return his jackpot after it was discovered he was guided by coughs from an accomplice in the audience.

Ingram, 54, from Wilts, was convicted, fined and forced to resign as a major. 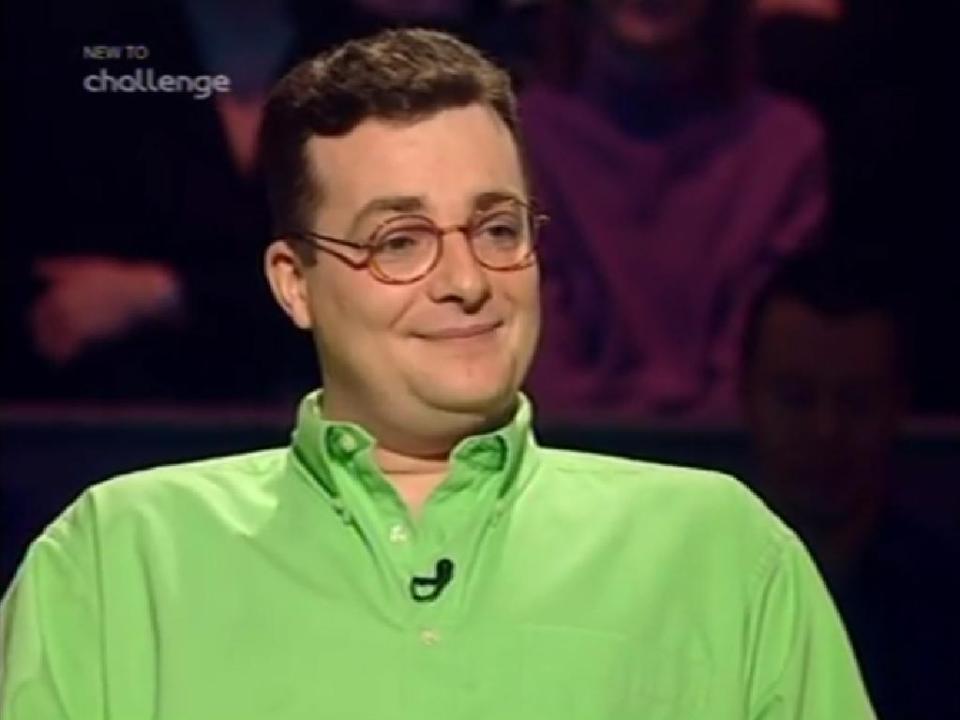 The warehouse worker from Blackburn said the minimum number of strokes with which a tennis player could win a set was 24. The correct answer is 12.

Producers apologised and Tony was allowed to keep his winnings. 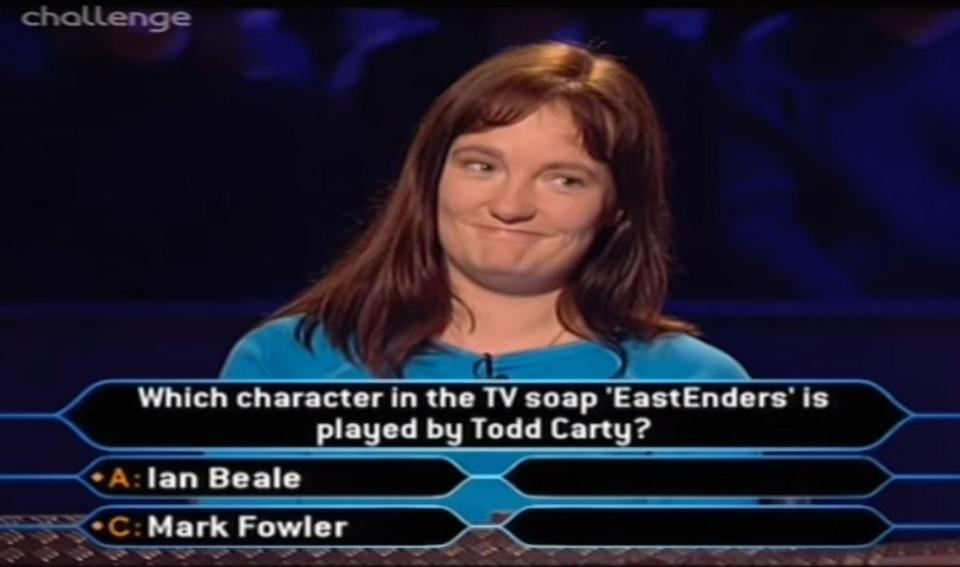 ONE hopeful did not win a penny in 2001. Michelle Simmonds, then 30, was asked: “Which word specifically links a kind of mammal with an archbishop or high-ranking bishop?”

After 50/50, the last of her lifelines, left her with “Primate” or “Marsupial”, Michelle picked the latter. 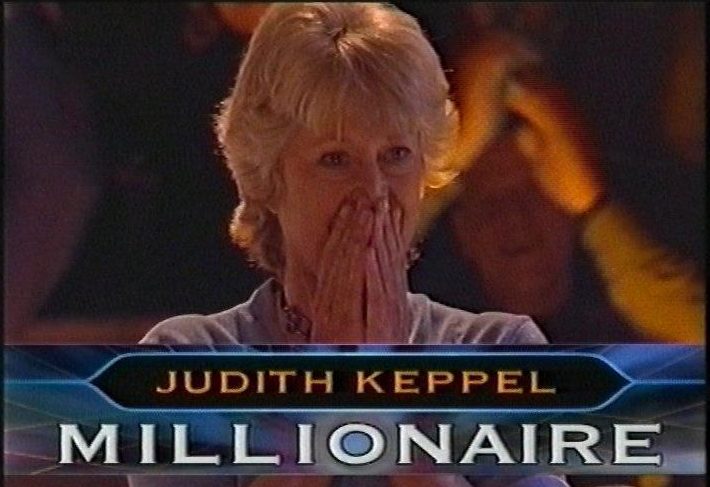 WHEN Judith Keppel, now one of BBC2’s Eggheads, became the first millionaire, it sparked an unlikely spat.

Actor Richard Wilson said the timing was “suspicious” as it coincided with the final episode of his sitcom, One Foot in the Grave, on the BBC. 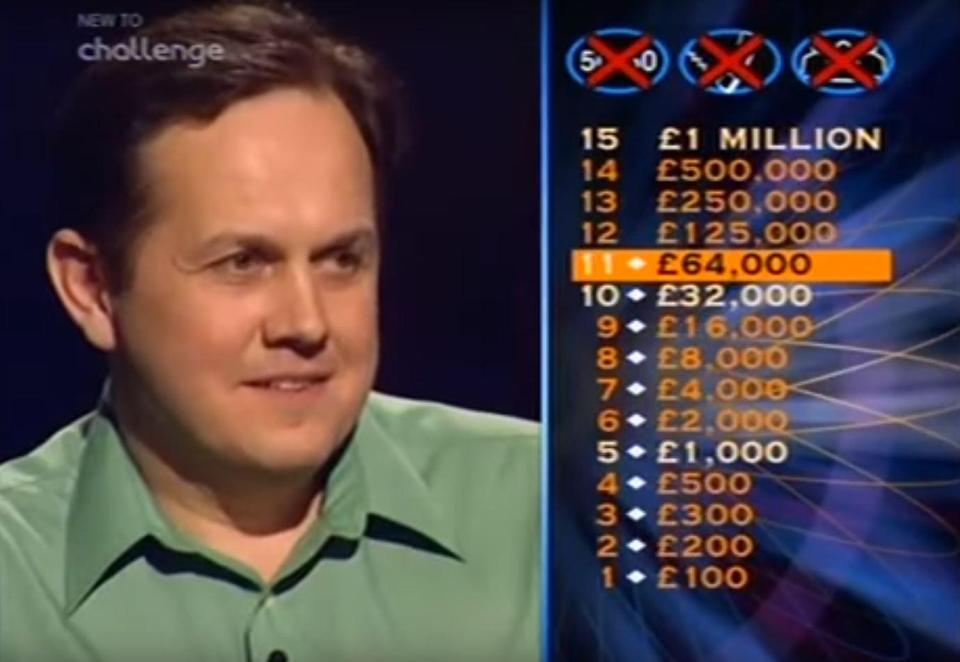 FANS were so desperate to get on the show that Keith Burgess organised a syndicate to help.

They won a total of £5million, of which Keith took ten per cent.