There’s arguably no theme tune more iconic in UK TV than the haunting sci-fi strains created for Doctor Who by Ron Grainer some 55 years ago. It’s outlasted Doctors, showrunners and even cancellations!

There has been a lot of talk about how it will (or won’t) be used in the upcoming series 11 recently, and how much of a spin new composer Segun Akinola will be putting on Grainer’s original.

That remains to be seen, but fans got to hear a version performed live by the Timelord herself when Jodie Whittaker guest starred on The Graham Norton Show on Friday night (September 28).

The theme tune came up after Graham mentioned that he’d brought in the mystical instrument known as theremin because it’s a favourite of fellow guest Ryan Gosling.

After Lady Gaga got a chance to play it, Graham joined Jodie for a jam session to pretty accurately recreate the opening bars of Ron Grainer’s Doctor Who theme tune. And while they weren’t quite as legendary as Twelve on the axe, they weren’t as diabolical as Borusa on The Harp of Rassilon either! 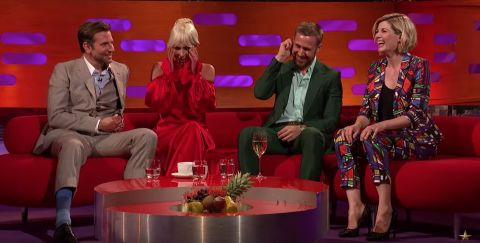 As mentioned, there’s been talk that the theme tune and opening titles may be skipped entirely for Jodie’s debut episode ‘The Woman Who Fell to Earth’, but composer Segun Akinola has also given Digital Spy a few hints about what tweaks will be made to the classic theme for its eventual return.

The Graham Norton Show returns with Jodie, Bradley Cooper, Lady Gaga and Ryan Gosling tonight at 10.35pm on BBC One.

Doctor Who season 11 premieres with ‘The Woman Who Fell to Earth’ on Sunday, October 7 at 6.45pm on BBC One.