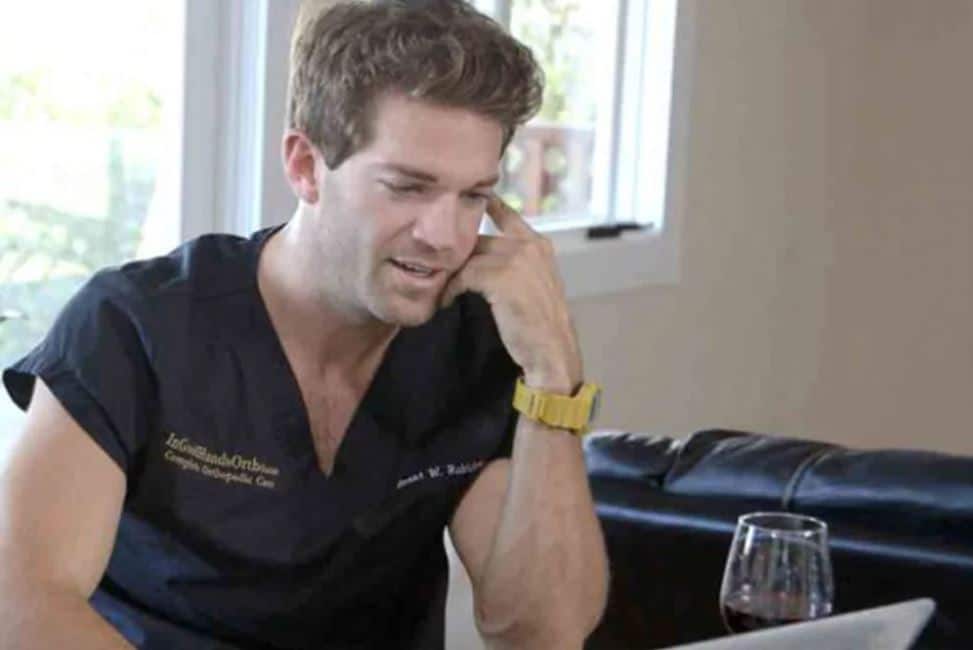 The orthopaedic surgeon was arrested last Friday with his girlfriend Cerissa Riley over allegations of drug and date rape from 2016.

Robicheaux’s episode no longer appears on the Bravo website, but what did he say about dating when he appeared on the reality series?

At the start he gave out advice, saying: “With online dating, if a girl’s not perfect to start with. Boom…you’ve got to be out.” He added: “I’m not looking for a party girl. I’m looking for a wife to raise a family with.”

A woman he goes on a date with is then shown saying: “You seem too perfect. What’s wrong with you?”

Later on, the 38-year-old revealed how his online dating profile name was “In Good Hands”. He was then shown in his office examining the profiles of potential dates and critically assessing each one with some help from a female office worker.

She is heard telling him of a potential date: “She’s not your type.”

Robicheaux, who claims he has been involved in lots of competitive sports including bull riding, is then heard saying: “I’m not looking just a girlfriend for the week or the month, I am looking for that partner for life…someone who has the same morals and values as I do.”

He adds in the episode, which was still available on YouTube at the time of writing: “I want to raise a family, I want to have kids, and I’m going to be more picky about this decision than any other one.”

The Orange County District Attorney Tony Rackauckas announced at a press conference that Robicheaux, 38, and Riley were both accused of drugging and sexually assaulting two women.

“We believe the defendants used their good looks and charms to lower the inhibitions of their potential prey,” Rackauckas said.

According to the prosecutors, Robicheaux and Riley lured a 32-year-old woman at a Newport Beach restaurant  on April 10, 2016, and took her to a party and later Robicheaux’s apartment when she was intoxicated. More drugs were reportedly given to the alleged victim before the assault took place.

The woman called the police the next day, and a forensic exam found multiple controlled substances in her system.

Another claimed attack occurred on October 2, 2016, where a second alleged intoxicated victim was said to have been taken back to Robicheaux’s apartment before being sexually assaulted. Detectives believe the there could be many more victims.

Online Dating Rituals of the American Male aired for one season and is no longer in production.

Le Mans ’66 review: A movie for car-lovers and the uninitiated alike