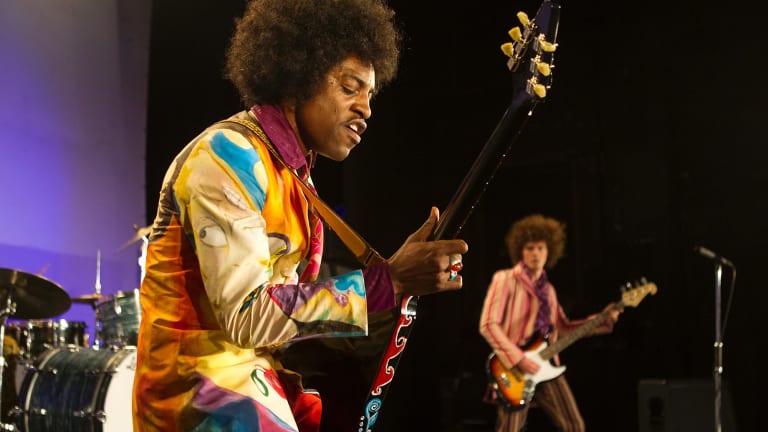 Andre Benjamin stars as Jimi Hendrix in the unconventional biopic Jimi: All Is By My Side.

It's cold and windy but also very pretty in Wellington as Julia Zemiro starts the sixth season of her interview show. She's in New Zealand to talk to actress and producer Rebecca Gibney about her early years. They zoom around in a Mini, a tribute to Gibney's first car, visiting a primary school, whizzing past a high school and arriving at the actress's former family home. The discussion of childhood and adolescence clearly provokes memories that remain raw and painful for Gibney, although she proves a generous and candid subject, willing to reflect on dark times but also intent on seeing the light. On screen, she initially made her mark as a sunny blonde radiating earthy good cheer; here she emerges as a vibrant woman who's worked hard to make peace with a sometimes troubled past. DE

Here it comes. Since early in the first season of this beautifully crafted domestic drama, viewers have known that Jack Pearson (Milo Ventimiglia) dies. The series moves fluidly between time periods and, in the present, Jack is gone and his loving wife, Rebecca (Mandy Moore), has a new partner. So there have been pressing questions about what happened, and when and how it happened. Well into the second season, That'll be the Day, set partly on Super Bowl Sunday, marks the start of a two-parter that reveals the answers. And as one might expect from this series, the events are cleverly calibrated and extremely moving. The emotions it stirs are big ones – even if you did sneak a peak to find out what happened earlier this year, when these episodes screened in the US. Have tissues handy. DE

It's confronting stuff as a group of addiction "interventionists" (some of them familiar faces from previous series of Intervention) head to Atlanta, Georgia, to fan out across leafy, conservative suburbs that have unexpectedly found themselves in the grip of America's new heroin crisis. This first episode, however, is spent with camera crews following the addicts around, capturing the misery, desperation and danger in which they live. Twentysomethings​ Billy and Tiffany epitomise the chaos. Living out of a two-door car that they share with two dogs, they have lost custody of their baby son – who was born addicted to methadone – and despite their desire to get sober, they're constantly preoccupied with getting money and drugs. The series can certainly be seen as exploitative, but it does let addicts and their families know they're not alone, and everyone will be hoping the addicts here accept the eventual offer of free rehab. BN

Deprived of Jimi Hendrix's music due to his estate's lack of co-operation, this biopic of rock music's greatest guitarist mostly succeeds by focusing on a single year he spent in London just prior to gaining recognition in 1967. Featuring a nuanced performance by Outkast's Andre Benjamin as the former US paratrooper tuned phenomenon, the film never loses track of a reticent, complicated man, who preached love but could be violent to his girlfriend, Kathy Etchingham (Hayley Atwell). 12 Years a Slave screenwriter John Ridley uses intrusive techniques to make clear he isn't delivering a conventional biopic, and it's a welcome change from the usual staid life story of a great man. Aside from Atwell's Kathy, female characters such as Linda (Imogen Poots), Hendrix's initial London advocate, and Ida (Ruth Negga), a fellow African-American who brings Hendrix's hopes to cross racial divides into contested focus, are thankfully complex. CM

Fans flock to Instagrams of Drew Carey, ex-fiancée Amie Harwick after her killing