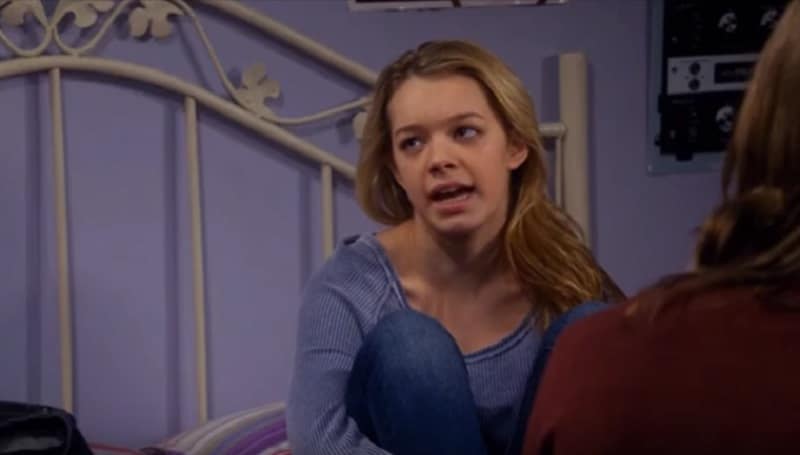 A new episode of Mom airs tonight on CBS and with it comes the return of Violet. The character played by Sadie Calvano has been on the show before and now she’s back for Season 6, episode 8 titled Jell-O Shots and the Truth About Santa.

Christy, played by Anna Farris, has a daughter named Violet on the hit CBS show Mom. Violet was on the show for a while, giving birth to a child of her own.

Actress Sadie Calvano, who plays Violet on Mom, hasn’t been on the show since early in Season 4. The last time she was seen, the character was dealing with a case of mono.

In recent years, the show Mom has been more focused on Christy and Bonnie’s recovery group and Bonnie’s relationship with Adam (William Fichtner). That put Violet, who has been off at college, on a different trajectory.

During the new episode of the show, Christy finds out that Violet has a podcast. On that podcast, it is made to appear that Christy was not a very good mother. This shocking revelation will lead to a lot of humor and scenes that include both Anna Farris and Sadie Calvano.

It’s good for the show to re-visit a character like Violet, as she played an important part in a number of subplots. While the show is more focused on sobriety and the group of women trying to stay on the right paths in life, it’s always good to touch on the prior relationships those characters have had.

Fans definitely want to make sure to tune in to the new episode of Mom to see the on-screen reunion of Christy and Violet.