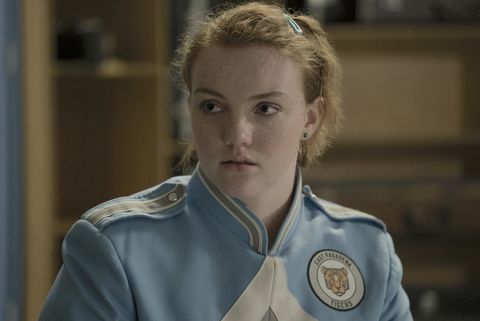 This post contains spoilers about Sierra Burgess Is a Loser. Stream It

Sierra Burgess Is a Loser—Netflix’s latest YA rom-com, streaming today—has an admirable laundry list of themes and messages it wants to deliver. See: seeing someone for who they really are, self-confidence and self-acceptance, and lest we forget, continuing our thirst for Noah Centineo. See? Admirable!

That said, by trying to check them all off a list, the film falls short on a couple of fronts. While Sierra Burgess is the most throwback John Hughes-ish film so far in the Year of the Rom-Com—think Pretty In Pink meets The Breakfast Club—it fails to deliver on the genre’s promise: fun!

Sierra (played by the brilliant, delightful Shannon Purser) is a sharp, talented, high school senior with aspirations to be a writer. Thing is, she doesn’t quite fit in because she doesn’t fit the traditional “cute girl” standard. She’s a bigger girl, and a band geek, with seemingly only one friend, Dan (RJ Cyler). Nonetheless, refreshingly, she seems to like herself (as illustrated in the opening sequence when she looks at herself in the mirror and exclaims, “You are a magnificent beast!”).

When a prank by the school’s resident Mean Girl, Veronica (Kristine Froseth), leads Sierra to receive texts from a cute football player named Jamey (Noah Centineo, as if you don’t already know), who believes he’s actually texting Veronica, she falls hard and leads him to believe she is actually Veronica. Soon, Jamey wants to FaceTime with her, and fearing that he might not like what she sees, she enlists the help of Veronica to help her with the hoax.

Body positivity is more than just having a character like herself.

Sound familiar? It is: it’s Cyrano de Bergerac with a Gen Z update. But the classically questionable love story feels especially misplaced in today’s times. The storyline feels a little creepy, TBH—basically, Sierra is catfishing Jamey. Just look at the first kiss shared by Sierra and Jamey! I mean, imagine a guy insisting you keep your eyes closed for several minutes only to have you unknowingly kiss a stranger. It just felt wrong, you know? Like I was watching a violation of consent happen that wanted to be packaged as romance.

There’s also a slight melancholic vibe throughout film. As if we’re supposed to feel sad for Sierra because she’s a bigger girl, so sad that we can excuse her catfishing. That’s just terrible thinking. Body positivity is more than just having a character like herself, it’s allowing the audience to see her as a normal girl who experiences love and relationships just like anyone else.

The fact that Purser has some serious onscreen charm is the real reason we feel for Sierra.

Following in the footsteps of many teen rom-coms before her—I’m looking at you, Andie who ignored her ride-or-die Duckie in favor of Blaine in Pretty in Pink—Sierra is an imperfect champion, and not because she’s the supposed nerd of the story. She’s kind of a crappy friend. When it comes to her friendship with Dan, she’s inattentive and completely self-serving. In fact, by the end of the film, we know virtually nothing about Dan, other than he seems to be her constant shoulder to lean on even when she starts to neglect him.

The climax also has Sierra pulling a pretty terrible stunt, slut-shaming Veronica and exposing something very emotional for her. It’s not only out of character, but also pits two women against each other over a man. Hard pass.

OK, so Sierra Burgess Is a Loser isn’t perfect. But, let’s face it, most rom-coms typically aren’t.

Had Sierra been played by anyone other than Shannon Purser, it would have been a total fail. The fact that Purser has some serious onscreen charm is the real reason we feel for Sierra, or at least why we want to. And of course, Centineo is perfectly cast as the cute boy with the heart of gold. Watching Purser and Centineo together, you not only root for them to get to finally share that swoon-inducing kiss, but you also really, really like them both off-screen, too.

OK, so Sierra Burgess Is a Loser isn’t perfect. But, let’s face it, most rom-coms typically aren’t. And while catfishing is definitely not the way to anyone’s heart, the film’s *chef’s kiss*-level acting talent and the deeper message of seeing someone for who they are, not just as they appear, will give you something to cheer for.

Manifest Casts Grace's Estranged Brother — But Can He Be Trusted?