Home » TV & Movies » WWE Goldberg interview: 'Roman Reigns and The Undertaker are the two guys on my list right now'

After his acrimonious 2004 departure, Goldberg turned his WWE return into an incredible storybook tale.

When he came back in 2016 after a 12-year absence, the former WWE and WCW World Heavyweight Champion was received with a thunderous ovation, and even the newer wave of fans jumped right into the classic “Goldberg” chant.

What was initially thought to be a one-off match at Survivor Series against Brock Lesnar turned into a shocking 90-second lopsided victory via Jackhammer. 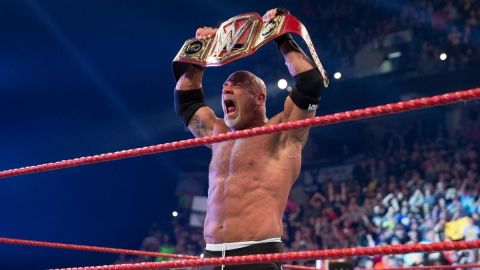 Goldberg then won his first world championship in over 13 years as he defeated Kevin Owens to win the Universal Championship at Fastlane, leading to a mega rematch between Goldberg and Lesnar at WrestleMania 33, where Lesnar won the title.

Putting a bow on Goldberg‘s run, he was the headliner of the 2018 WWE Hall of Fame. We recently caught up with him to talk about all that, plus that talk of another in-ring comeback.

“Oh, they were not true. Absolutely not, and I don’t know where that came from. But, when I read it online was the first I ever heard of it.”

Did WWE have any interest at all in using you for WrestleMania 34?

“If they did, they didn’t eloquate it to me. Uh, I don’t think so. I mean, let’s be perfectly honest, if they did, they would have asked me to be involved, and then I would have had to consider it. Man, it’s a tough, tough deal for me, because even if I was offered something, you know you have to take your legacy into consideration and it’s how I came back after such a long period of time and what happened, I just don’t know how it could get much better than that. 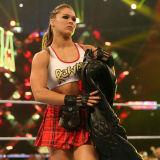 “To be able to share it with my family, to be able to come back and have at least one or two people remember who I was, and actually cheer for me, it was a very humbling experience. I’ll forever be indebted to Brock and to Vince McMahon for bringing me back and giving me that opportunity.

“They didn’t have to do it, obviously it was a way of making some money for them, but for me it was a dream come true. For people to get one opportunity to do something special in their life is pretty rare, but I’ve had many. And this last one, as far as wrestling is concerned was the coolest one I could ever have had.”

How was working with Kevin Owens?

“It was cool. I mean, you know, it’s tough. I’m greatly appreciative that he was a professional storyline-wise, and I went out there and beat him in a very short period of time. Unfortunately, I wasn’t able to have a little program with him of any substance because it was a conduit to get to getting somewhere else. 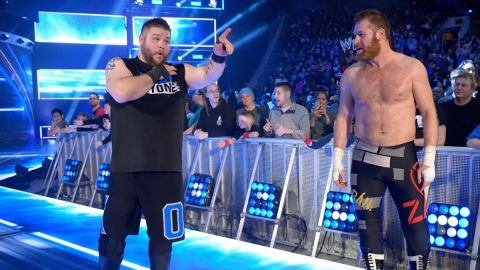 “And he’s a great worker. Great heel. He’s a good kid. And it would have been exciting to be able to smash him a couple more times, as supposed to just once or twice. For a guy like me to go back, it’s tough to sit and have programs with all the guys that you want and with all the newcomers, because it’s just not apples to apples anymore

“I’ve created something very fortunately with the help of a lot of people and that’s what I stand on now. And thank God for that because I’d hate to have to come back and earn my stripes again. You know, Kevin’s a great talent, and like I said, there’s a number of guys I’d love to work with, but things are a little different now.”

Fans popped hard for your return in October 2016 and even more at Survivor Series, but you started to get booed at the Hall of Fame. You hadn’t changed anything as far as being Goldberg. Why do you think they turned the corner?

“I can understand a little bit in that I was extremely limited when I came back. I think I did three moves, and that gets old. I mean, when you’re in your prime and have three moves, that’s one thing, but when I’m asked only to do a pretty short skill set, it further reinforces why they’d probably want to boo. 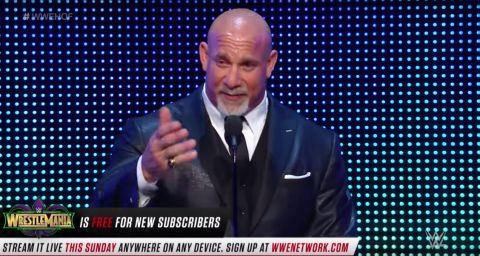 “These days, it’s a whole new generation of kids, I mean, a couple generations since I’ve been in there, seemingly. But, you know, it’s all about them. ‘Hey, look at me. I wanna take a video on my cell phone and show everybody where I am and what I’m eating and what I’m wearing and what I’m doing’. It’s too much. They want to be the ones that start that goofy chant. They want to be the ones to mess the guy up when he’s doing his promo.

“I remember a day where they sat back and were entertained by what we did. They didn’t try to dictate everything. Now, they wanna dictate stuff. So, you know, I jumped on them a little bit after [WrestleMania] that night, when I got a little indifferent when I went out there and was speaking from my heart. I will have absolutely none of that. 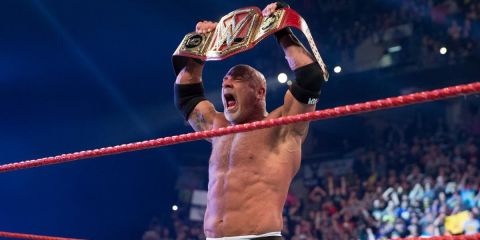 “It’s not fair to the kids out there busting their ass, bleeding, you know, going night after night after night on the road, being away from their families only out there to entertain the fans. And it’s kinda gotten to a point where I wouldn’t put up with it anymore. Something’s gotta be changed. But, maybe that’s just me the old man talking.”

What do you think of The Undertaker nowadays? Do you think if he can go, he should keep going, or should he hang up his boots?

You know, it’s not my decision. If you asked him the same question about me, he’d probably say the same thing. At the end of the day, it’s up to the person lacing those boots up, and my opinion is nothing but that. And one person’s opinion doesn’t mean that things are right or wrong.

“I believe that in Mark’s head, Mark knows when to call it quits. He’ll do it when he wants to, and nobody can tell him otherwise, except for Vince, maybe. You know, they can sit down and have a man-to-man, and when it gets to the point where the performance isn’t there, or you’re enduring too much pain [where] you have to prepare too many different ways to get into the match, then it’s time to do it. 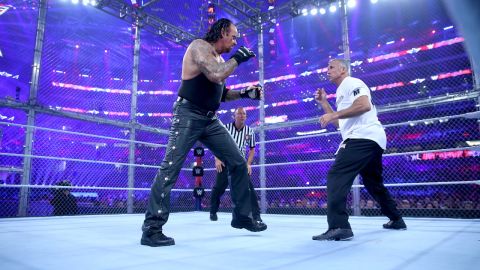 “But, it’s a really very hard thing to do. And money doesn’t drive it. People think that money drives them, and that has nothing to do with it. We’re talking about careers here that need to be made or broken in one or two matches, or one comeback. One of the old-time programs.

“You know you don’t want to change your legacy. So, it’s something very much to consider, and it’s tough. I mean, when I got offered the opportunity to come back, it was tough for me. I mean, I didn’t know — personally, I didn’t want to do it. 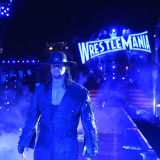 “For the family, there wasn’t an iota in my mind that didn’t want to do it. So I had to meet myself in the middle, take a sacrifice, and take one for the team and go out and do my thing. I wasn’t prepared the way I wanted to be, but I finally got prepared enough, and then it was time to hang them up again.”

With Survivor Series, the Kevin Owen match and the Lesnar feud, bookended with two very emotional speeches, I think your run was the best storybook comeback run that we could possibly see…

“Well, I appreciate it. Like I said, it was a tough decision to come back, and if I did come back, like everything else, I always give 1,000%. I never am satisfied with anything that I do, so it further pushes me to get better next time.

” You know, I always made a statement that I’d never have my family involved in wrestling, but the only reason and the only way that I’d let it happen was it was the story. So there was no other reason for me to come back. There wasn’t, it just made no sense, it’d just been an arbitrary, ‘Hey, I’m back.’ This was truth. This was real life.”

The fans saw that, and they bought into it which really helped the difference between now and your ’03-’04 run for sure.

I didn’t know that Sting had such an influence on your career until your Hall of Fame speech – what can you tell us about that and his own WWE run?

“You know, I’ll be honest with you man. I was a professional football player, okay. And I met a number of these guys throughout the years being in Atlanta. And I always thought [wrestling] was kinda goofy. I did. Being a professional football player and going out there and trying to kill the guy every single play, and then I segue into a business to where I’m acting like I’m [doing that], it was just weird for me. 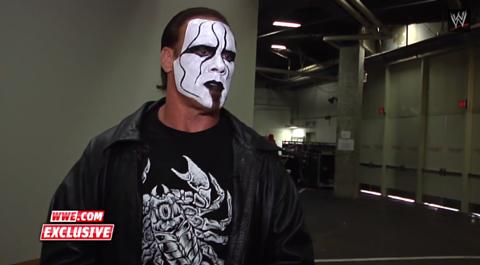 “And so, it was tough for me to make the decision, to pull the trigger and actually do it. Until I met Sting. And getting to know him, and getting to know the person that he was, the morals he had, the way he carried himself, I looked at him and said, well hell, if he can do it, I can do it. Period, end of story.

The WWETV deals for Raw and SmackDown with USA and Fox came to over $2 billion collectively… do wrestlers ever see any of that as far as increase in pay?

“Well, they sure as hell should. And if it’s not out in the open right now, then I don’t know when it’s gonna be, or what’s gonna happen for it to be. But, yeah, there’s no question that it should trickle down. I mean, the guys are the ones that put people in the seats. Period, end of story.

“Now, obviously, it could be somebody else, but could that somebody else do the job that they do? So, yeah, I think it’s only fair that it trickles down to the talent, and it would be an injustice if it didn’t.”

You talked about Roman Reigns’s Spear in your Hall of Fame speech – could we see Goldberg vs. Roman Reigns at WrestleMania 35?

“All I got to say is, it ain’t up to me. Whether it’s Reigns or ‘Taker, and, I don’t know, I’m not gonna say anybody else. Hey, Reigns and ‘Taker are the two guys on my list right now. I mean, obviously for two different reasons, but I’d be honoured to get in the ring with either one of them. And I still owe Brock one, but I’m two-and-one on him, so it’s all good.”

Trump Acquitted as Impeachment Trial Comes to an End

‘We are at war with a virus – and not winning it,’ United Nations says