Simon Cowell was left in a pickle this evening (September 29) after young vocalist Georgia Burgess demanded that he gave her another shot after being kicked off The X Factor’s Six Chair Challenge.

Georgia’s ticket to the next round had been usurped by Shan during tonight’s episode in brutal fashion, but she was quickly off her feet begging the judge to give her one last chance at proving her talent. 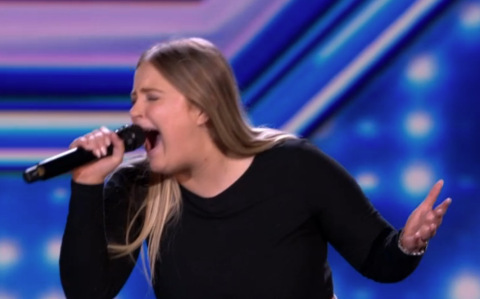 After she emphatically performed the Robin S classic ‘Show Me Love’ – erupting Wembley Stadium into applause in the process – Simon revealed: “I really admire your determination,” before awarding Georgia with a seat.

However, the world of Twitter was completely divided after witnessing this twist.

For a heavily divisive figure himself, Simon’s decision to take Georgia up on her demand may prove he’s softening as the years go by.

Could it be, as he’s previously hinted, that fatherhood has brought him a new positive outlook? Earlier on in the auditions process Simon’s four-year-old son Eric came onto the show to meet his dad’s fellow judge Louis Tomlinson.

When Louis remarked that it was nice to see a family side to the longtime reality judge, Simon replied: “It has been the best thing in my life. You know why? Because I see everything through a more positive light now.”

Meanwhile, the show’s Six Chair Challenge didn’t go down very smoothly tonight after many fans at home found the whole thing quite “rushed” and “convoluted”.

Who plays Orin on The Orville? Mackenzie Astin is from a legendary acting family