Jane Levy’s Zoey gets all the attention on Zoey’s Extraordinary Playlist, and rightly so, as the delightful musical dramedy revolves around her magical ability to hear people’s innermost heart songs. But as the second season continues to progress, another character is stepping out of the shadows. Meet singer-actress Alice Lee, whose character, Zoey’s sister-in-law, Emily (also an attorney and new mom), is beginning to carve out her place in the ensemble.

The 31-year-old has a slew of movie and TV credits from the past eight years, from Faking It and Switched at Birth to indies Brittany Runs a Marathon and Sierra Burgess Is a Loser. But she may be more recognizable to some through her stage work in Spring Awakening, where she first met and became friends with co-star Skylar Astin, and Heathers: The Musical or a brief stint on the singing competition series Rising Star in 2014. Her YouTube covers of popular songs have also received thousands of views.

And as these things often go, when Zoey’s Playlist came her way during pilot season in 2019, Lee was initially in the running for another character, Zoey’s BFF and neighbor, Mo, which ultimately went to Alex Newell after the role was dramatically tweaked. Unsure there was a place for her in the show, a phone call a few months later changed everything. “My rep called and they’re like, ‘Hey, they would actually love for you to play Emily,'” Lee recalled. Fate intervened.

Speaking to ET, Lee discussed how she was cast on the NBC series, discovering — along with the audience — her character and breaking free from playing teenagers.

ET: How did this opportunity present itself?

Alice Lee: I auditioned for the show during pilot season. But I was asked to audition for Mo. Yes, played by the great Alex Newell who was just nominated for a Critics’ Choice Award. I auditioned for Mo and actually tested for Mo, so I’d seen Alex there. Obviously Alex got it and a couple months later my rep called and they’re like, “Hey, they would actually love for you to play Emily, who’s Zoey’s sister-in-law.” And I was like, “I’m down.” So it came up that way.

Did they end up writing the character to you after they cast you?

Because it’s loosely based on [creator] Austin [Winsberg]’s life and his father, I was kind of playing his wife in a way. I think he took some stuff from their relationship and I think she’s a very strong lady. I don’t think they wrote it knowing me, but it was cool. It was nice to be offered that. So very thankful.

We’re learning a lot more about Emily, her marriage to David and her insecurities as she navigates motherhood for the first time. How has the character evolved over the past year and a half?

I feel like her role definitely got bigger. In the beginning, she was kind of in the family, but more on the periphery. I think it’s so cool. We get to meet her sister and get more into David and Emily’s relationship, which I think is adorable. Yeah, I’m excited. She gets a couple more songs, show a bit more of her personality. 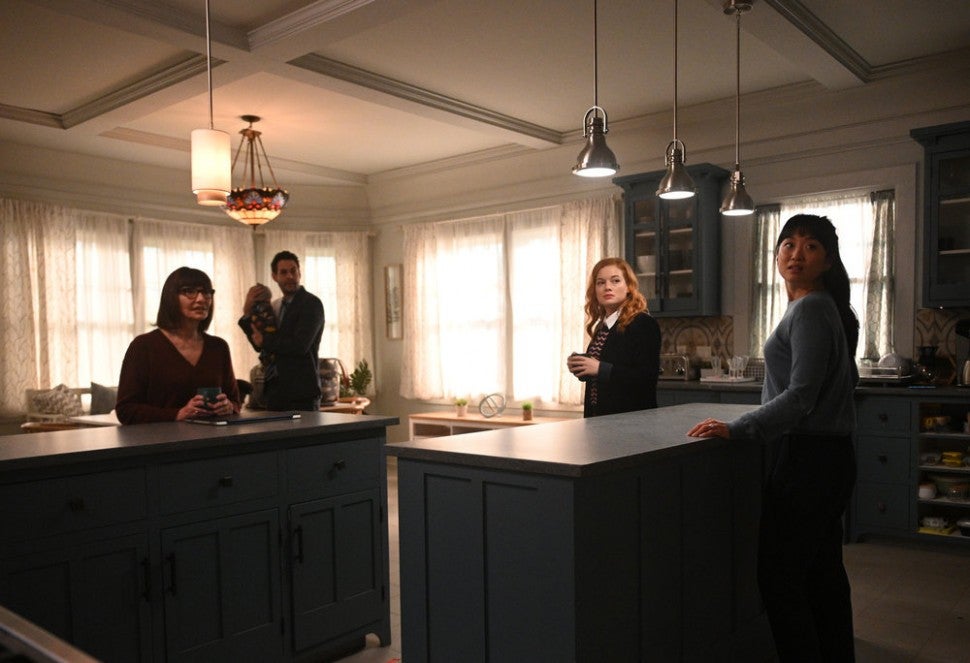 What drew you to Emily initially?

Her humor was very dry. I loved that and I guess it’s different from other characters I’ve played. At first I was nervous because I didn’t audition for it. So I was like, “Oh, can I even do this character?” But it’s been really cool and getting to know the character more as I have more scenes with the family members. I think that also helps a lot to shape her based on who she is with everyone else around her. I think that’s important and I just feel like, there are so many layers to her. She’s a mom but she’s a wife and she’s a lawyer. And then her in-laws, like her father-in-law was passing away. That’s a lot of heavy stuff and we also get to see her dealing with having a baby and being a mom, the emotional stuff that comes with that is all in season 2, so I’m excited for that.

In what ways is she different from past characters you’ve played? Can you elaborate on what you meant by that?

I feel like most of the characters I’ve played are usually not married and having babies. I’ve played just a lot of teens, like mean girls. This one was just more mature and it’s a different style. I’m just a bit more extra, I guess, but it was interesting playing a mom and wearing a fake belly. It was like, “Oh my god!”

What has been your favorite part about digging into David and Emily’s relationship?

I might be biased, but I feel like when we have Emily and David scenes, you want to watch them. Also it’s kind of figuring out, “Why are they together?” Discovering what makes them [work]. I love Andrew [Leeds], he’s so wonderful. We’re also discovering that as well: What drew them to each other? How are they such a match? We’re figuring it out and I think it’s so cute. I’m always down for more little peeks into their life, their dynamic, I think. More of that I’m always down with.

What are you looking forward to this season that you hope to explore down the line?

I’m definitely excited for her because there’s going to be a bit more of an emotional journey for her in the second half, which we’re about to shoot now. As I go in depth a little more with Emily, that’ll be really cool. And also, I love having a sister come into the season right now. Love another Asian sis up in here.

I loved when Jenna came into the picture because she just is the complete opposite from Emily.

I feel like I’m more Jenna than I am Emily. I also I knew Jee [Young Han], the girl who plays my sister. We were already friends from L.A., isn’t that great? I knew her from New York actually from years ago. And in L.A. we would see each other at auditions. And then we slowly became friends and hung out, and then she told me she got this and it’s like, “Wow, universe!” We bonded. She actually lived above me while we were here in Vancouver. So while she was quarantining, we’d say hi on the balcony and hang out on the balcony and while she was here, she’d make Korean food and we’d work out together.

What can we see with Emily and Jenna’s complicated dynamic?

She’s around for a bit. I think there are some issues. 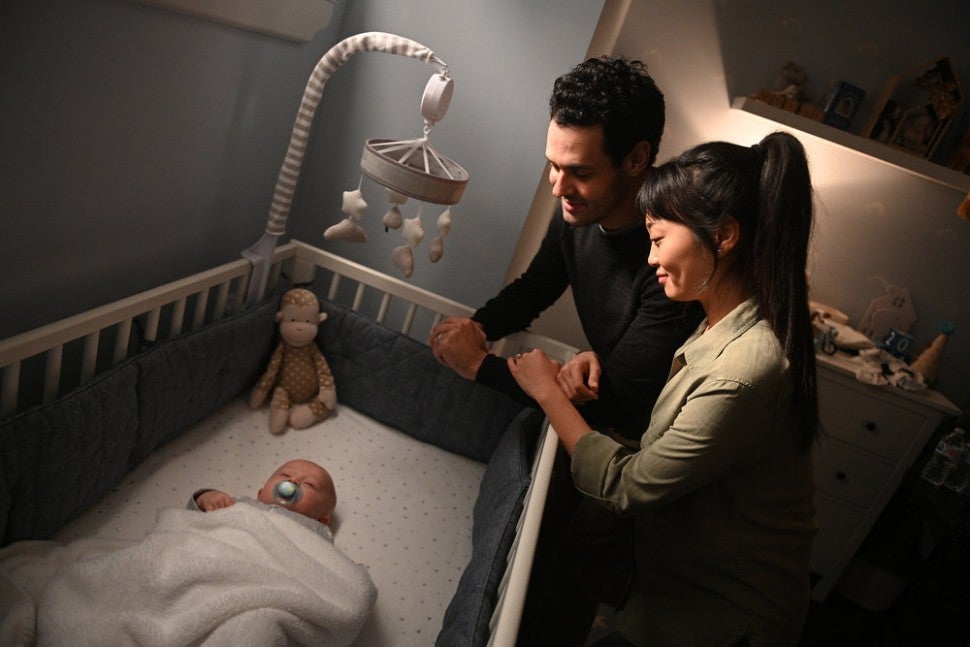 In terms of your own career, where does an opportunity like Zoey’s Extraordinary Playlist land in the context of your career at the moment?

There were definitely moments maybe five years ago, 10 years ago, [where] it’s like to think that I would be on a network show that’s doing really well and [doing] all the things I love — singing, dancing, acting — I take a step back and I’m like, “Oh s**t, I’m actually doing that.” And that’s really cool. And I’m having so much fun. It’s a good group of people. Because I started off in musical theater, I remember always feeling like, “I wonder if I’ll actually ever be a character.” In musical theater, you have ensemble members and I started in the ensemble with Skylar [Astin] in Spring Awakening. I was in the closing cast of Broadway. I came in, Skylar was already in it, so I knew him from way back then and I was like, “I wonder if I’ll actually ever play a character.” That goes through your head and then flash-forward [to now]… It’s really cool. I’m very grateful, definitely.

Is there a musical number coming up that you’re excited about?

Yeah. I don’t know if I can reveal it yet though. It’s one of those emotional ones. You’re going to get a little emotional, I think.

It sounds like there are big things for Emily as she goes through her post-pregnancy journey. What can you tee up with what we can expect for the next couple episodes for her specifically?

Now that she’s had a baby, she’s figuring out, also with David itself it goes into their dynamic about how they navigate parenthood together. And so in the next couple of episodes, you’ll get to see them figuring it out as well. So that’ll be cool. You’ll get to see a little more into their lives. That baby is really cute. He’s even cuter in person! He’s the star of the show. At first, when I first held him, I was so nervous because I was definitely like, “Oh my god, so fragile!” and also he’s just a little baby. So when he cried, I felt bad. We’re all like, “Oh no, Kai, are you OK?” But it’s a joy whenever he’s there.

Is there anything else you’re working on currently?

I’m going to come out with the original stuff too. It’s a single and I’ll have a music video for that too. (Lee released “Smile” on Jan. 29.)

Is that something you’re actively pursuing?

I think I want to pursue it. I’ve always been a music person. I started off in music and I’ve been writing for a long time, but I’ve done more acting but yeah, I’m just going to f**king go for it, go out and put some stuff out there and see what happens. Just trying to put some pop music out there. I feel like there’s room for Asian American artists.

Zoey’s Extraordinary Playlist airs Tuesdays at 8 p.m. ET/PT on NBC. For more on the series, watch below.

To stay up to date on breaking TV news, sign up for ET’s daily newsletter.

Where is Property Brothers filmed?

Boohoo’s Latest Collection Is All About Flattering Pieces — Shop Now!