As the coronavirus death toll continues to rise daily, and an increasing number of countries administer strict lockdowns, it can be easy to feel discouraged, depressed, and uncertain of what the future holds.

But moments of kindness around the world have been rampant since the onslaught of the outbreak. In the face of this crisis, people have come together to develop volunteer networks, create inspirational videos, and give one another messages of love.

Here are some uplifting moments that have left us feeling hopeful and connected in these difficult times.

Quarantined Italians have been singing and dancing together from their balconies. This sign reads, "Come on guys, everything is going to be alright." 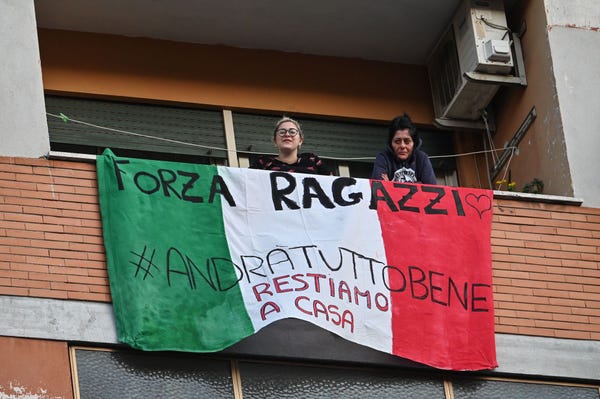 Heartwarming videos of quarantined Italians performing "flash mobs" from their balconies have gone viral over the last couple weeks, as Italy grapples with the deadliest outbreak to date.

Two young New York City residents created a network of over 1,300 volunteers in just 72 hours in order to deliver food and medicine to elderly people in New York and New Jersey. 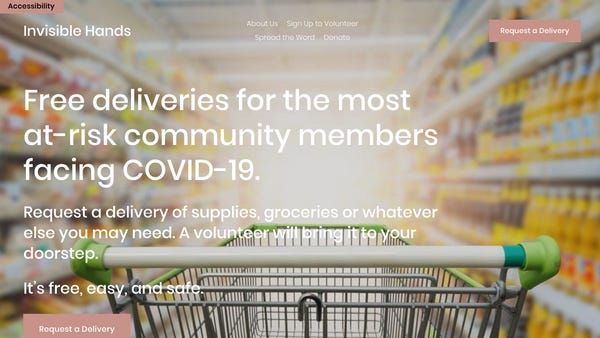 Liam Elkind, a junior at Yale, and Simone Policano, an actor and producer, created a network called "Invisible Hands," where they recruit members of the community who are least at risk for contracting COVID-19, and enlist them to provide services to the elderly and others who are most at risk.

In order to request a delivery, you simply go to their website, fill out a form with the details of your request, and a volunteer will call to confirm what you need.

The volunteer will then pick up those items and deliver them while maintaining proper social distancing.

People in Spain, Ireland, Portugal, and France have coordinated times to applaud healthcare workers who are saving lives on the front lines. 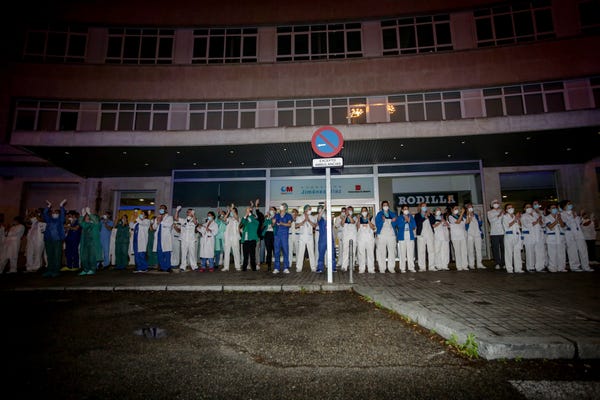 In Spain, cheers and applause have been heard around 10 p.m. throughout multiple cities including Madrid, Barcelona, and Valencia.

In turn, Spanish healthcare workers responded with a heartwarming video thanking the public for their respect and for staying inside.

In Canada, the idea of "caremongering," or coming together as a community to provide food, medical supplies, and support to those in need has become widespread. 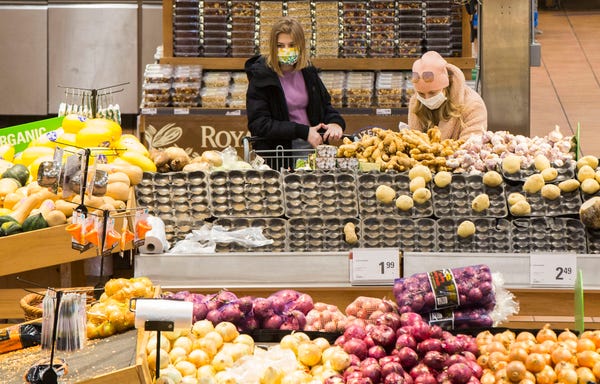 Dubbed in Canada as the antithesis to the term "fearmongering," people are beginning to come together to celebrate "caremongering," by practicing acts of kindness during the coronavirus outbreak.

Many of these caremonger groups have mobilized through social media. Some provide food and medical supplies to those in need, while others run errands or serve as a platform to recruit volunteers to help the most vulnerable.

Volunteers in Iran have turned shuttered mosques into makeshift spaces to sew face masks and prepare food packages for those in need.

As cases continue to soar in Iran, mosques have been closed for worship across the country, but some are getting a new purpose.

The Italian Air force sent a message of hope to the country by painting the sky in the nation's colors along to the Luciano Pavarotti song "Nessun Dorma." 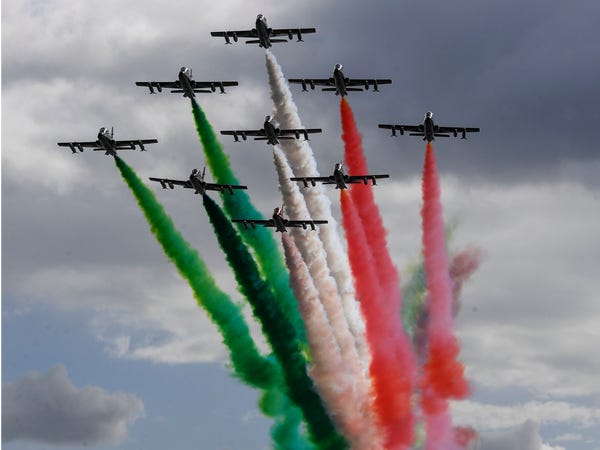 As Italy undergoes a country-wide lockdown, the Italian air force took to the skies to send an uplifting message of hope to its citizens.

The emotional opera song ends with the defiant lyrics of "I will win!"

US customers have been "paying it forward" by leaving thousands of dollars worth in tips to help restaurant staff during closures.

As news broke that Houston restaurants would have to close their dining rooms and offer only takeout and delivery to quell the spread of the coronavirus in Texas, an anonymous couple decided to lend the staffers a helping hand.

A similar situation happened at Coaches Bar and Grill in Columbus, Ohio, where a costumer left a $2,500 tip to be split among employees after hearing the bar would be forced to close down.

Celebrities and musicians have come together in isolation to create songs and send uplifting messages.

In a video created by Gal Gadot, celebrities including Natalie Portman, Will Ferrell, and Kristen Wigg were featured singing John Lennon's "Imagine" (people had mixed reactions to it online).

Matthew McConaughey encouraged the world to make "turn a red light into a green light and just keep livin'," and Judi Dench shared a message that we should all "just keep laughing."

Museums, operas, observatories, and libraries around the world are offering free services to those who are homebound. 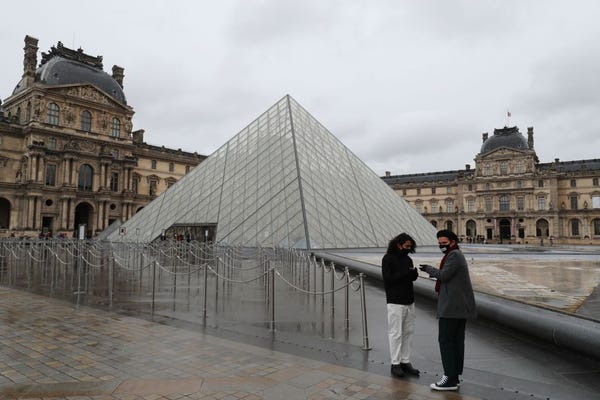 To keep us entertained and inspired while staying at home, art museums including the Louvre, Smithsonian, and Guggenheim are offering free virtual tours of their sprawling cultural collections.

In Australia, the Sydney Observatory offered a virtual tour of the night sky, and the D.C. Public Library  just launched a virtual book club to inspire people to read and engage with one another during the outbreak.

The Shedd Aquarium in Chicago shared a heartwarming video of penguins running around to look at the exhibits after it closed down to the public.

The Shedd Aquarium in Chicago is just one of many tourist attractions that have closed amidst the spread of the coronavirus, but in order to remain cheerful, staff members have allowed the penguins to run throughout the empty aquarium and greet the other animals.

The heartwarming videos and photos went viral and gave those of us who have been stuck at home a much-needed break from negative coverage of the pandemic.

Major grocery stores around the world have created specific shopping times to lower the risk for the elderly and those most susceptible to the disease. 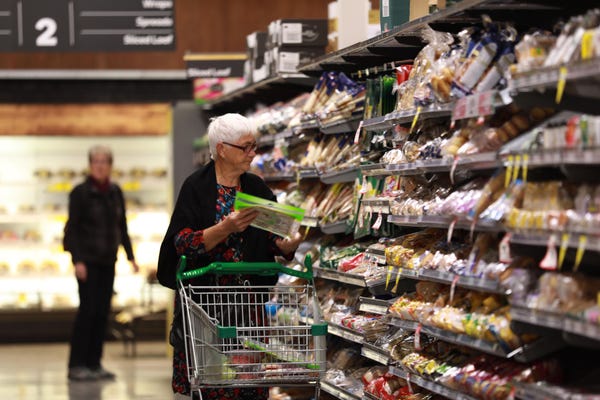 Several major retail stores including Walmart, Target, Whole Foods, and Stop & Stop have dedicated special opening hours for shoppers who are elderly and most at risk for contracting the COVID-19 virus.

To make food safely available to seniors, many companies have ramped up efforts to thoroughly disinfect their stores, and provide specific shopping times that will limit the chance of exposure for high-risk citizens.

Students in the Chino Hills High School Chamber choir in California came together to make an inspirational video singing "Somewhere over the rainbow" after their school concert was canceled.

To send a message of inspiration and hope to fellow classmates and the world, students in the Chino Hills High School Chambor choir created a video singing together, while being forced to remain apart.

At the end of the video, the message #spreadhopeCVUSD appeared across the screen.

Kevin Bacon played off of the "six degrees of separation" joke by creating a viral video encouraging people to stay home for someone you love.

#IStayHomeFor @kikkosedg! Hey everybody, it’s now so important to stay home and keep our distance from others if you are able. It’s one way we can help prevent the spread of #Coronavirus and save lives. The more of us who can, make it safer for those who can’t. So if you’re home too like me, post a video or photo with a sign like mine, telling who you are staying home for and ask 6 friends to do the same. Post it with the hashtag #IStayHomeFor so I can see and share. The more folks involved, the merrier – We’re all connected by various degrees (Trust me, I know!) I’m kicking it off with @jimmyfallon @eltonjohn @Brandicarlile @kevinhart4real @ddlovato @davidbeckham – but I encourage YOU ALL to join in too! Let’s use this 6 Degree thing to do some good! . . . . #Corona #Coronavirus #StayHome #StaySafe #6Degrees #ThinkingOfYou #SpreadTheWord

The notorious "six degrees of separation" joke claims that everyone in the world is only six people away from a connection to actor Kevin Bacon. Playing off this idea, the actor kick-started a message by encouraging people to maintain six degrees of social distancing and to "stay at home for someone you love."

Bacon then nominated other celebrities to do the same, and the video has since been shared by Ellen Degeneres, Elton John, David Beckham, Brandi Carlile, and more.

A fitness instructor in Spain has offered free classes from his rooftop for people whoare isolated in apartments and homes nearby.

A post shared by Sano Sevilla Los Bermejales (@sanosevillabermejales) on Mar 14, 2020 at 7:25am PDT

After Spain went under a nationwide lockdown, a fitness instructor from the group Sano Sevilla Los Bermejales led a workout class from his rooftop.

The instructor guided those from surrounding balconies to join in a group fitness exercise, sending the message that even though people are confined to their homes, there can still be a collective effort to maintain health and hope.

John Legend and Chris Martin have launched a series called "Together at Home", bringing free and intimate concert performances to fans who are quarantined. 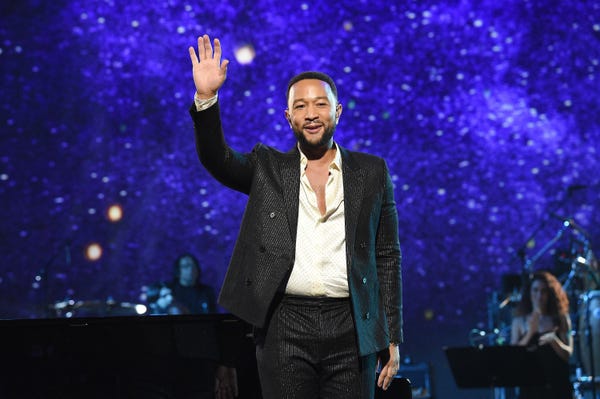 Since the coronavirus outbreak has caused cancellations to concerts, tours and festivals for the forseeable future, a number of musicians have come together to lift the spirits of fans by livestreaming concerts from the safety of their own homes.

Insider has created a running list of these uplifting performances and how to watch them here.

Massimo Bottura, a Michelin-starred chef, has created a "kitchen quarantine" series on Instagram, teaching basic recipes to food lovers who are stuck at home.

Hey All, here is a video from yesterday’s prep for our hummus, artichoke and pasta fagioli dinner. See you tonight at 8 pm CET for a new episode of #kitchenquarantine • Stay Safe and Stay Tuned!

Massimo Bottura, a Michelin-starred Italian chef, has taken the opportunity to inspire his 1.2 million instagram followers to join him in a "kitchen quarantine" cooking series.

Bottura has created livestream videos for recipes on foods such as Mac and Cheese, hummus, and chocolate sauce, and is encouraging those who are stuck inside to continue cooking and stay healthy.

The Barefoot Contessa Ina Garten is sharing daily recipes to cook at home on her Instagram, too.

NBA players, including Kevin Love and Zion Williamson, have donated large sums of money to hourly stadium workers who aren't able to go back to work. 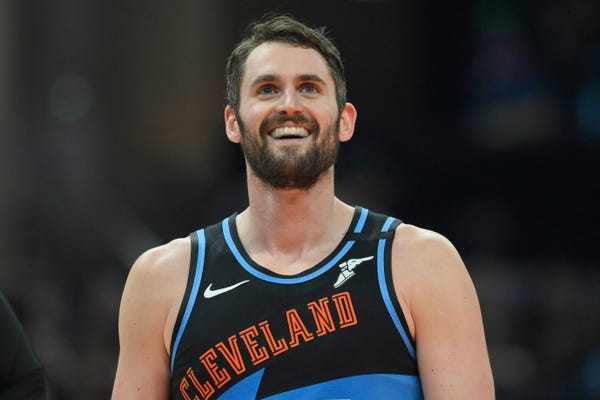 As a way to give back to workers who are often overlooked in the sports sector, NBA players including Kevin Love and Zion Williamson have pledged to donate hundreds of thousands of dollars to hourly stadium workers who have lost their jobs amidst the coronavirus outbreak.

"These are the folks who make our games possible, creating the perfect environment for our fans and everyone involved in the organization," Williamson wrote in an Instagram post announcing his pledge.

The Rotterdam Philharmonic Orchestra in the Netherlands created an uplifting video of musicians playing a montage of Beethoven from their homes.

Members of the Rotterdam Philharmonic Orchestra came together from the safety of their homes to perform an uplifting version of Beethoven's Ninth Symphony.

On YouTube, the orchestra wrote: "We're adjusting to a new reality and we'll have to find solutions in order to support each other. Creative forces help us, let's think outside of the box and use innovation to keep our connection and make it work, together. Because if we do it together, we'll succeed."

For more acts of inspiration and kindness, you can join the Kindness Pandemic Facebook Group. 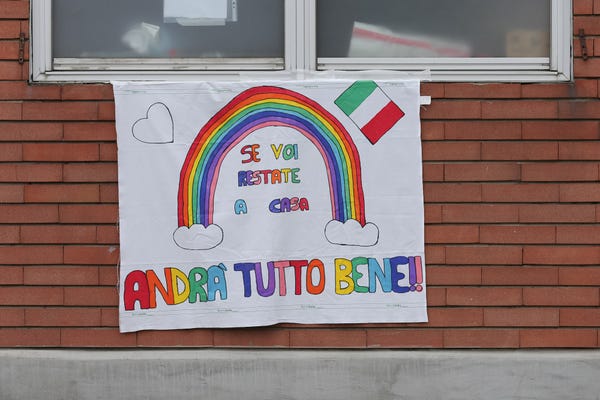 The Kindness Pandemic Facebook group was created as a public online space for the global community to share acts of kindness amidst the COVID-19 outbreak.

The public facebook group was created only two weeks but already has more than 400,000 members sharing inspirational stories daily.