Up to 30% of Covid-19 survivors may be left with irreversible lung damage and ‘persistent psychological impairments’, NHS guidance warns

A third of Covid-19 survivors may suffer long-term damage to their lungs that leaves them struggling to breathe, according to research.

Other nasty coronaviruses — such as SARS and MERS — are already known to cause ‘persistent’ harm to the lungs.

But evidence on Covid-19 is murky, given scientists only spotted the life-threatening pathogen six month ago in the Chinese city of Wuhan.

Doctors say the respiratory disease will be similar to other coronaviruses and lead to pulmonary fibrosis, the irreversible scarring of the lungs.

Leaked NHS guidance says up to 30 per cent of Covid-19 survivors may suffer long-term lung damage, if it takes the same path as SARS or MERS.

And it warns survivors could face ‘persistent physical, cognitive and psychological impairments’, including chronic fatigue syndrome.

Other studies have shown SARS-CoV-2 virus — which causes Covid-19 — can attack organs, such as the heart, liver, kidneys and blood vessels. 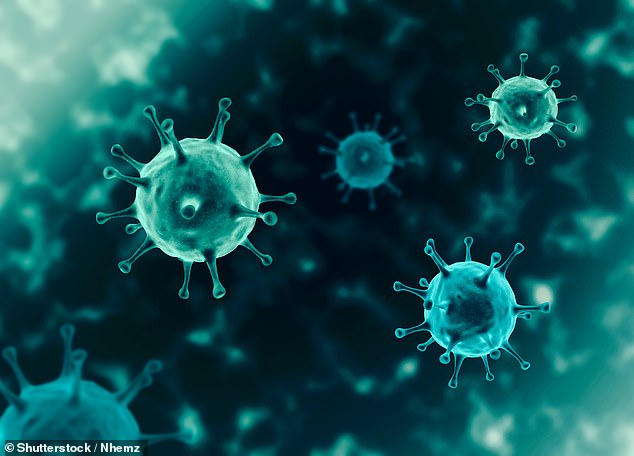 Other nasty coronaviruses — such as SARS and MERS — are already known to cause ‘persistent’ harm to the lungs. But evidence on Covid-19 is murky, given scientists only spotted the life-threatening pathogen six month ago in the Chinese city of Wuhan

Physiotherapists have repeatedly warned patients can suffer a loss of mobility if they are stuck on hospital wards for weeks, or endure flashbacks.

The NHS guidance, seen by The Telegraph, was sent to primary care and community services, which includes GPs and district nurses.

It said: ‘Approximately 30 per cent of survivors of the global SARS outbreak caused by SARS-CoV and MERS-CoV experienced persistent physiological impairment and abnormal radiology consistent with fibrotic lung disease.

‘It is envisaged that pulmonary fibrosis [lung damage and scarring] is likely to be an important sequela/condition which is the consequence of Covid-19.’

The guidance also reportedly warned that one in seven patients who fought for their lives on intensive care may be struck down with lasting brain damage.

Seventy per cent of them will suffer delirium which will lead to ‘established cognitive impairment’ in one in five cases, the memo said.

Only 300,000 Brits have actually tested positive for the disease — meaning 100,000 could face lasting damage, if the estimates are correct.

But health officials estimate the size of the outbreak may be in the region of 5million cases, leaving 1.5million Brits at risk of permanent harm.

World Health Organization (WHO) figures, however, show that both SARS and MERS are more lethal than Covid-19, with death rates at least 10 times higher.

How long does it take to recover from coronavirus?

Doctors say it’s unclear how long it takes people to truly recover from COVID-19, however anecdotal evidence suggests it can take months.

Indeed, when the Prime Minister was rushed to intensive care, experts issued grave warnings about how long he would be out of action for.

One medical precept holds that for every week a patient is in intensive care, there will require double that time to fully recover once discharged.

The more serious someone’s illness is, the longer it takes, and those who end up in intensive care may be left with permanent damage to their lungs and liver.

Scientists think it is likely people become immune to the virus in at least the short term, meaning they won’t catch it twice, but they are not certain.

COVID-19 is caused by a virus which mainly attaches to and attacks cells in the lining of the airways and the lungs, which is why sufferers find it so difficult to breathe.

The body’s immune reaction is what causes symptoms – swelling in the areas where the virus is attacking makes the airways close up and make it hard to breathe, and patients cough to try and expel the viruses and dead lung tissue from their bodies.

The immune system also causes a high temperature and aches and pains as it tries to make the body too hostile for it to survive.

And patients become exhausted as the virus makes the lungs unable to get enough oxygen into the blood, depleting muscles’ energy supplies.

While the vast majority of people who catch the coronavirus survive – some with medical help, but many without – the effects of it can linger on for weeks afterwards.

Government scientists have called for studies to investigate the lasting effects of the illness, which some experts have branded ‘post-Covid disability’ and likened to polio.

NHS bosses last month opened a rehabilitation centre to help thousands of Covid-19 patients recover from the long-term damage caused by the virus.

The head of the NHS Seacole Centre admitted she was worried about how little was known about just how long the consequences could last for.

Dr Hilary Floyd told The Telegraph she was shocked by just how young many patients were, revealing some had been in their forties and fifties.

She added: ‘These are people who were independent, they might be running their own business, going to the gym, swimming, active. Now they are at the point they can’t get out of bed.

‘We have a couple of patients in their 40s at the moment; we really didn’t expect that. We were expecting them to be older.’

In a stark warning about the potential damage Covid-19 could pose, Dr Floyd added: ‘They may always have some level of debilitation.’

She added that some of the patients are only able to do 10-minute bursts of physical activity because of their fatigue and breathlessness.

Dr Janet Scott, an post-viral sequelae expert and clinical lecturer at the University of Glasgow-MRC Center for Virus Research, told the newspaper some patients would get ‘post-traumatic stress, anxiety or depression’.

Scientists are currently clueless as to how long it takes infected patients to fully recover from Covid-19, which has killed 450,000 people worldwide.

Health officials earlier this month announced a ground-breaking trial to examine the long-term damage inflicted by Covid-19 on major organs.

The two-year study, the first of its kind in the UK, hopes to solve the mystery around the lasting effects of the disease using scans of coronavirus patients.

Government scientists have already warned coronavirus patients could be left short of breath for months after their battle with the disease.

SAGE, a panel of exerts who advise Number 10 in emergencies, also warned Covid-19 survivors may endure weeks of fatigue in a meeting on May 7.

Brits who have fought off the virus have revealed throughout the outbreak that they have been wiped of energy and left struggling to walk up the stairs.

Evidence is emerging that the coronavirus may affect the brain, causing seizures and stroke, as well as harming the liver, kidneys, heart and blood vessels.

A paper in the journal JAMA Cardiology in March reported one in five of 416 Covid-19 patients hospitalised in Wuhan, China, had suffered heart damage.

The researchers also found problems could occur even in those without underlying heart problems.

Another study from Wuhan, published in February, said 16 of 36 patients transferred to intensive care were suffering from arrhythmia (irregular heartbeats).

The heart problems are thought to occur as a result of the virus triggering a ‘cytokine storm’, where the immune system overreacts to the infection.

This leads to inflammation of the heart muscle. As a result, the heart pumps more weakly, causing symptoms such as breathlessness.