Islam’s most holiest site, the Kaaba at the centre of the Great Mosque in Mecca, was given a new £4.5m silk cover today as part of the annual hajj pilgrimage.

More than 150 artisans and technicians, with the help of two cranes, put the black cloth, known as the Kiswa, over the four sides of the Kaaba.

The cloth is split over five pieces up to almost 50ft in length and is made of high-quality silk and embroidered with gold and silver.

It costs £4.5million to make and is traditionally embroidered and stitched together in Saudi Arabia.

The cloth covers the Kaaba – the most sacred site in the Islam faith and the spot Muslims face when they say their prayers five times a day. 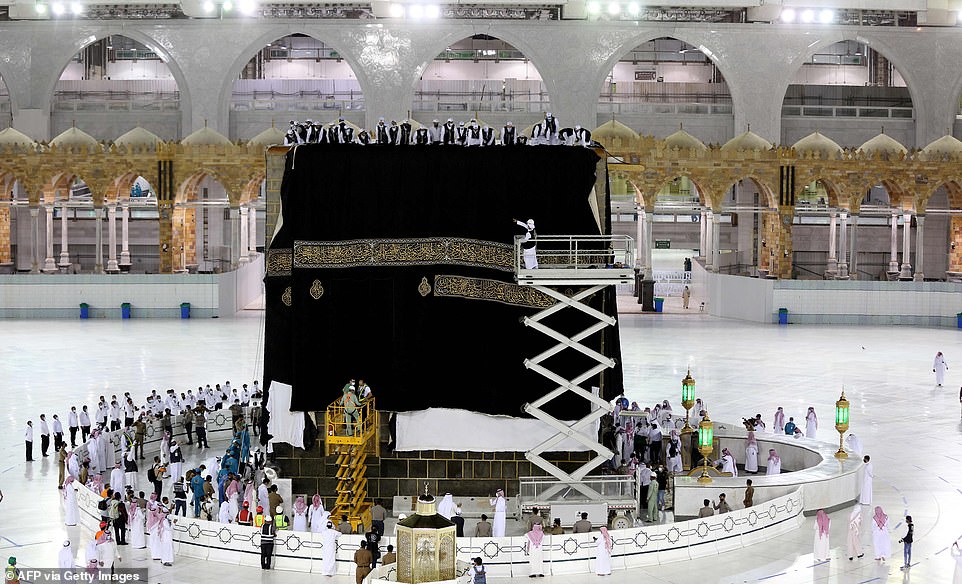 More than 150 people took part in the job of draping the Kaaba with the new Kiswa with the help of two mechanical cranes. The Kaaba is at the centre of the Great Mosque in Mecca 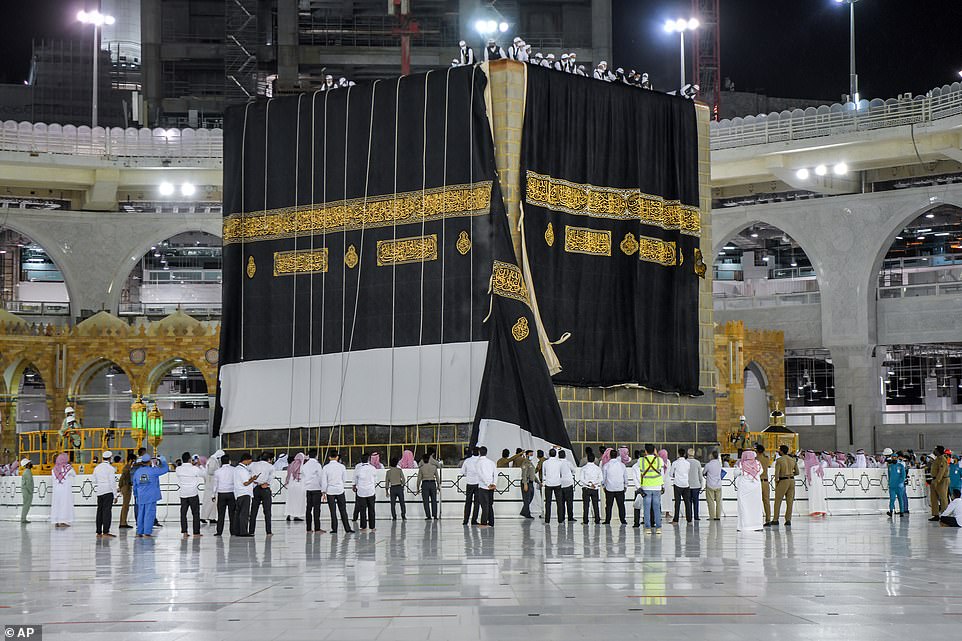 Out with the old Kiswa, and in with the new. The old cloth is replaced by workers who use long ropes while standing at the stop of the Kaaba 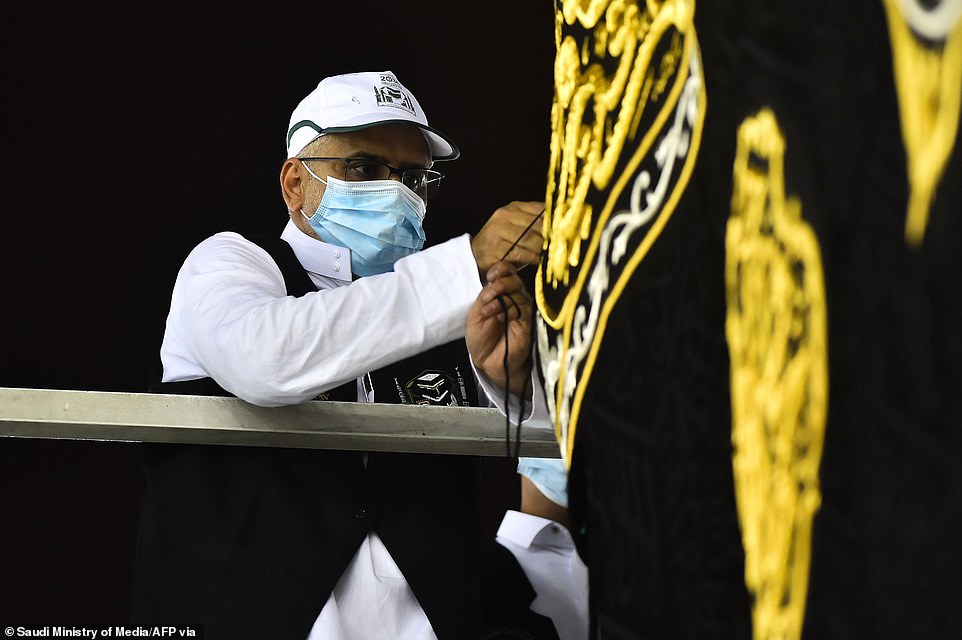 The Kiswa is embroidered with gold and silver threads. Here a worker pulls the cloth over the Kaaba. The annual event ties in with the hajj pilgrimage 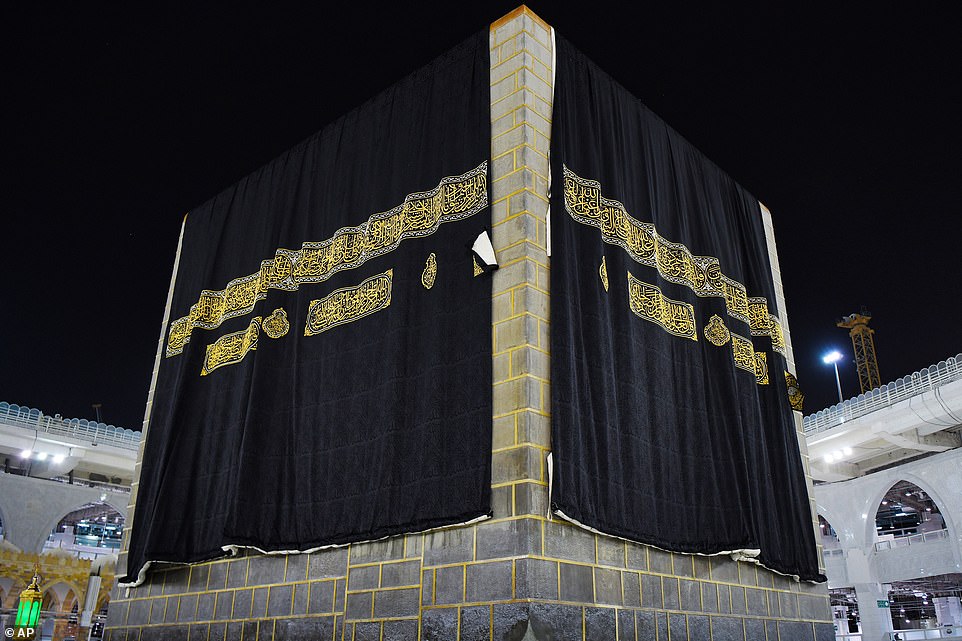 The final result as the new Kiswa is placed over the Kaaba in Mecca’s Great Mosque. The five pieces cover the four sides of the stone structure, and a curtain for the door 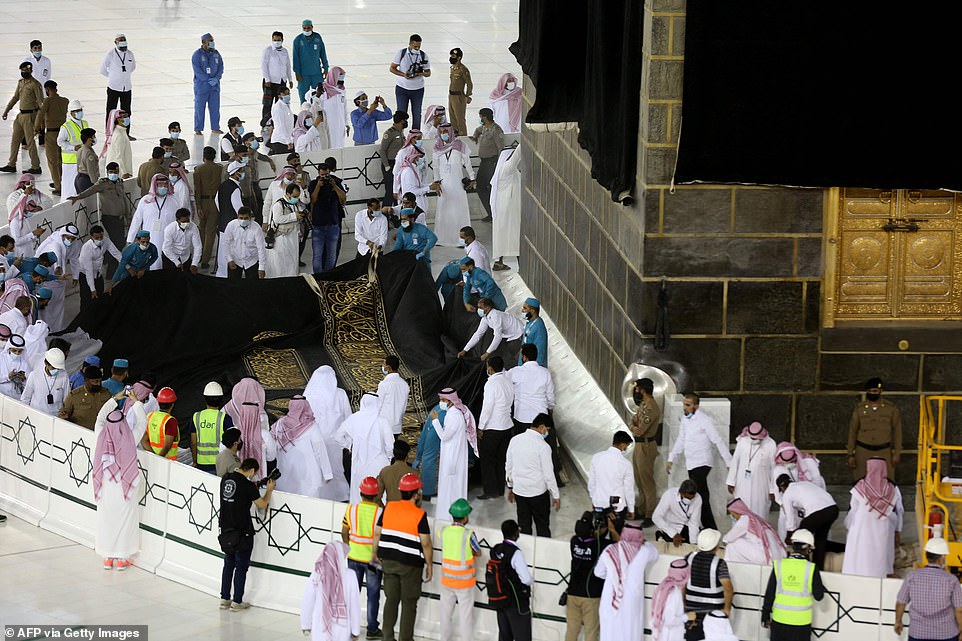 Embroidered on the kiswa are Quranic verses which are now done with help by computers, thus increasing the speed of production.

What is the Kiswa?

The Kiswa is a silk cloth placed over the Kaaba at the centre of the Great Mosque in Mecca – the holiest site in Islam – and is replaced each year as part of the Hajj pilgrimage.

Its origin is from when the Prophet Muhammed covering the Kaaba with Yemeni clothes following the conquest of Makkah in the ninth Hijri year, as he performed his farewell pilgrimage.

The colours of the covering has seen regular changes through the ages, including white, red and yellow. But today it is black with gold and silver threads embroidered in it.

It is split into five pieces to cover four sides of the Kaaba and a curtain for the door to the holy site. Up to 50ft in length, it weighs almost 1,500 lbs in high-quality silk.

It costs $6million to make and is traditionally paid for by the Saudi Arabia kingdom. 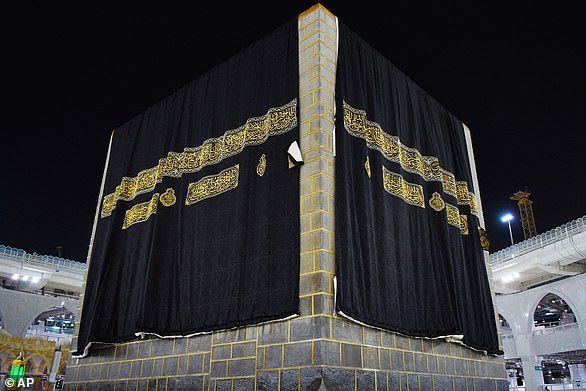 Every year the Kiswa is replaced as part of the five-day pilgrimage which this year has been restricted for just 10,000 people to participate in due to coronavirus.

Stringent protocols were in place today, including the wearing of face masks with the job carried out by staff of the General Presidency for the Affairs of the Two Holy Mosques.

Deputy head Ahmed Bin Mohammed Al-Mansouri said each of the four parts of the Kiswa was separately raised and tied at the top in preparation for stretching the cloth down.

Then, the old cloth was removed from the bottom and the new one remained.

Among the workers, photographers took pictures as the new cloth was unveiled this morning.

The Kaaba represents the metaphorical house of God and the oneness of God in Islam.

Saudi Arabia stakes its reputation on its guardianship of Islam’s holiest sites in Mecca and Medina and its peaceful organisation of hajj.

Over the years, the kingdom has spent billions of dollars on making one of the world’s biggest religious gatherings safe.

This year it has faced the challenge of making hajj, a once-in-a-lifetime duty for every able-bodied Muslim who can afford it and a major source of income for the government, safe from COVID-19.

For the first time in modern history it has dramatically reduced the number of pilgrims to ensure social distancing measures are adhered to.

The hajj minister said in June the number of pilgrims would be limited to around 1,000, but no official number has been given for those performing the rituals this week. Some local media cited a figure of around 10,000.

Saudi healthcare and security professionals, on the frontlines of the battle against the disease, make up about 30 per cent of the total, with the remainder coming from 160 nationalities residing in the Kingdom.

Mask-wearing pilgrims circled the Kaaba in small groups of 50 people yesterday, each keeping a safe distance apart and accompanied by a health professional monitoring their movements. 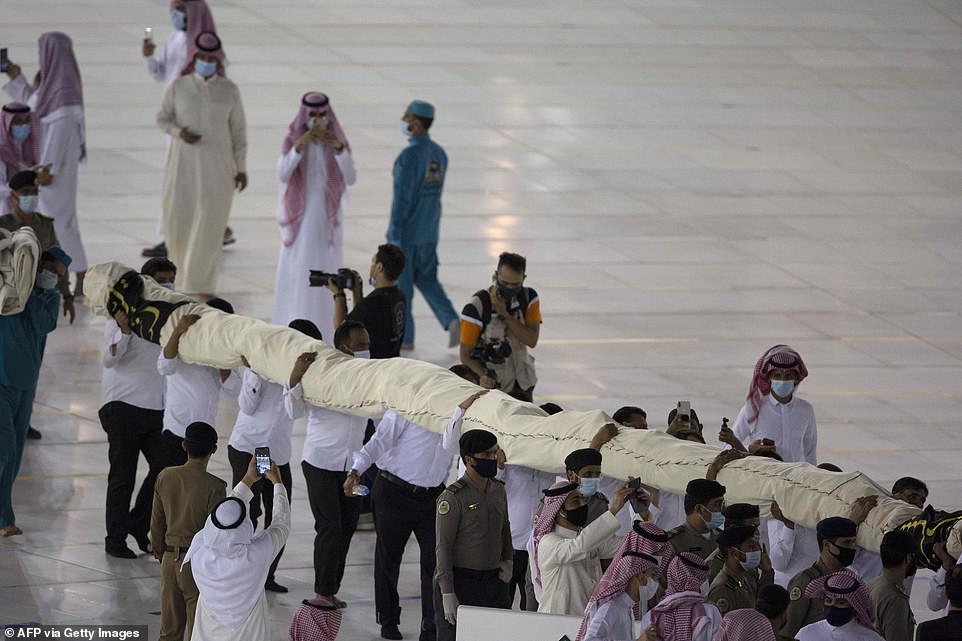 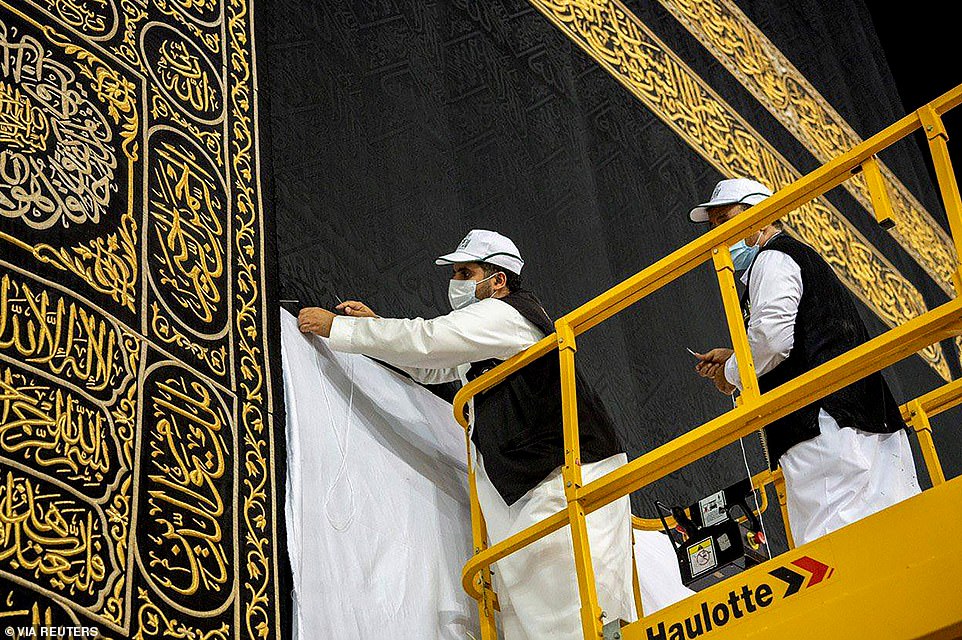 Using a crane, workers were able to easily add the new Kiswa, while also taking the replaced one down. Due to coronavirus, they all had to wear face masks while carrying out the job

In past years, a sea of pilgrims dressed in white terrycloth garments would start to gather at Mount Arafat, or hill of mercy as it’s known, before dawn and remain there until nightfall, spending the day in deep contemplation and worship.

It is common to see pilgrims with tears streaming down their faces, their hands raised in worship on the slopes of the rocky hill where the Prophet Muhammad called for equality and unity among Muslims. 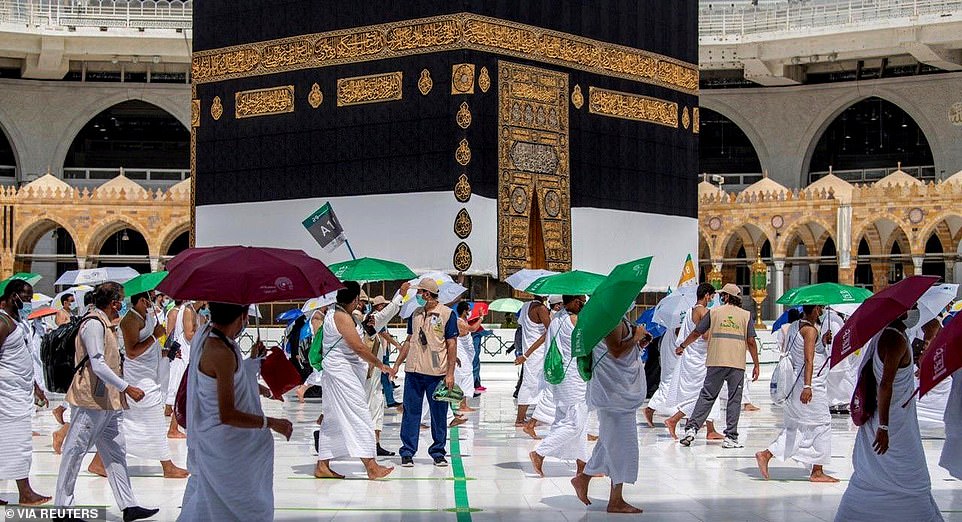 Muslim pilgrims maintain social distancing as they circle the Kaaba the day before the draping was repalced. The hajj ministry said non-Saudi residents of the kingdom from around 160 countries competed in the online selection process but it did not say how many people applied 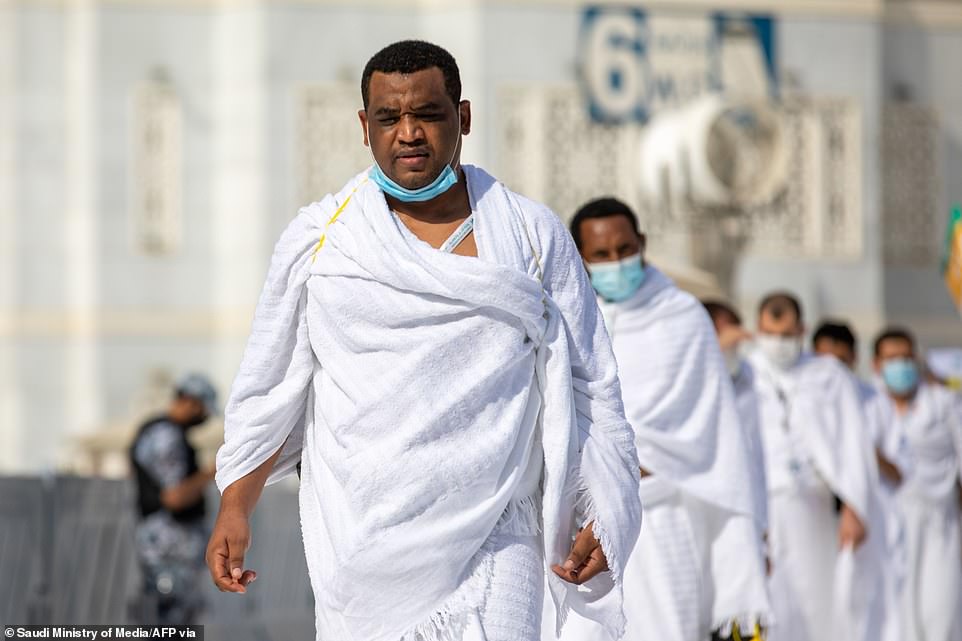 Saudi authorities initially said only around 1,000 pilgrims residing in the kingdom would be permitted for the hajj, but local media reports say as many as 10,000 will be allowed to take part

This year, the sliver of pilgrims performing the hajj arrived at Mount Arafat before noon by bus today.

They are travelling in small groups of 20, following strict guidelines around social distancing, and have undergone tests for the Covid-19 disease and were in quarantine before the hajj.

Not this year: Muslim pilgrims touch the Kaaba (right) – the cubic building which Muslims face when praying – during last year’s hajj, a practice which has been banned in 2020 over coronavirus fears. This year (left) the story is very different

Salma Hayek, 54, Reveals Why She Has ‘No Shame’ In Posting Sexy Bikini Photos