London: Heiress Tamara Ecclestone has been left "shaken" after a reported £50 million ($97 million) worth of gems were stolen from her London home. 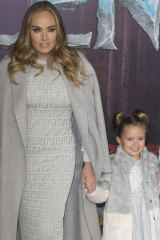 A British model and television personality, Ecclestone is the daughter of Bernie Ecclestone, the former chief executive of the Formula One Group, and Serbian model Slavica Ecclestone.

All of her jewellery is said to have been stolen in a Friday night raid on her house next to Hyde Park after she left the country for her Christmas holidays.

Thieves are believed to have broken in through the garden before breaking into safes hidden in the bedroom she shares with her husband Jay Rutland, according to the Sun newspaper.

The paper reports thieves fled with items including precious rings, earrings and a £80,000 Cartier bangle given to her as a wedding present.

A spokesman for Ecclestone, who has a five-year-old daughter, Sophia, confirmed a home invasion had taken place and internal security were cooperating with police.

"Tamara and family are well but obviously angry and shaken by the incident," the spokesman said.

A Scotland Yard spokesman said officers were called to a property in Palace Green late on Friday on reports an amount of high value jewellery had been stolen.

Meghan Markle: Lady Colin Campbell warns Duchess of Sussex not to ‘hustle her way to top’

JC Chasez Returns to Mickey Mouse Club as a Mentor