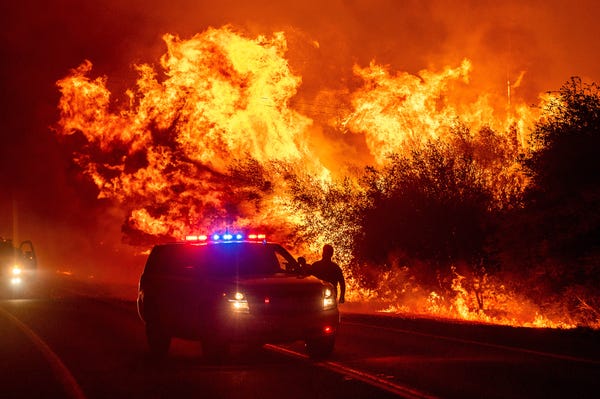 More than 85 large wildfires are ripping across the West Coast. The current blazes have killed at least 17 people, caused unprecedented damage in Washington and Oregon, and exacerbated what has already become California's biggest wildfire season ever.

"The sheer amount of fire on the landscape is surreal, and no one I have talked to can remember anything like it," Nick Nauslar, a meteorologist with the National Interagency Fire Center, told the Washington Post on Thursday.

The map below shows some of the biggest blazes in the three states, color coded by acreage.

In Oregon, 46 large fires have burned over 900,000 acres since Monday, according to Gov. Kate Brown – nearly double the state's average of 500,000 acres burned annually.

The Doe Fire is now the biggest in California history

This week, California's Doe Fire became the largest blaze in state history after state officials reported it had grown to 491,000 acres – roughly 768 square miles. If the fire were a city, it would be the second-biggest in the US by area, behind only Anchorage, Alaska.

The fire that previously ranked as California's biggest, the Mendocino Complex Fire, burned about 459,000 acres in 2018.

The Doe Fire is part of the more than 746,000-acre August Complex Fire (the term for a collection of fires), which began as 37 different blazes in the Mendocino National Forest on August 17, after lightning sparked hundreds of blazes across California.

Overall, more than 3.1 million acres have burned in California – more than any other year on record, though around two months still remain in the fire season.

The third- and fourth-biggest fires in California history are also burning right now: the SCU Lightning Complex and the LNU Lightning Complex Fires. Those have burned about 397,000 and 363,000 acres respectively since they started in August, and are 98 and 95% contained.

Other fires across the state include the North Complex Fire, which has burned more 247,000 acres in and around Butte County, destroyed 2,000 structures, and killed at least 10 people. Sixteen people are still missing. Additionally, at least two people died this week in the Slater Fire in Siskiyou County, according to Cal Fire.

All told, 20 people have died this year in California's 2020 wildfire season.

Unprecedented fires in the Pacific Northwest have killed at least five and forced tens of thousands to evacuate.

On Friday, Oregon Gov. Kate Brown said that 500,000 people — more than 10% of the state — were told to prepare to evacuate, according to the Associated Press, while at least 40,000 have been ordered to evacuate.

In Washington, large fires are also triggering evacuations and causing deaths. A one-year-old boy died after he and his parents were found along the banks of the Columbia River, fleeing the approximately 188,000-acre Cold Springs Fire; their truck was found abandoned and wrecked nearby. His parents suffered third-degree burns and are now in a Seattle hospital, according to the Seattle Times.

Recent trends show a clear pattern: California's 10 largest wildfires ever have all occurred since the year 2000. Five of those 10 happened this year.

Bigger and more frequent seasonal blazes are expected to erupt more and more often as California's land gets hotter and drier due to climate change. A recent analysis from Stanford University found that since the 1980s, the average temperature during California's wildfire season has risen by more than 2 degrees Fahrenheit. Overall precipitation in the season, meanwhile, has dropped by 30%. Those conditions have more than doubled the state's number of extreme wildfire risk days in the autumn.

"This is very much a way station on the path to a new future," Daniel Swain, a climate scientist at the University of California, Los Angeles, told BuzzFeed News on Thursday. "We have not reached the peak. In fact, no one knows where the peak is."

California's average fire season now lasts 75 days longer than it did in the early 2000s, according to Cal Fire.

Fire season is getting more extreme north of California, too. A study published in January predicted that in the Pacific Northwest region, climate change "will drive lower fuel moisture and longer fire seasons in the future, likely increasing the frequency and extent of fires compared to the twentieth century."

"It is the bellwether of the future. We are feeling the acute impacts of climate change," Gov. Brown tweeted on Thursday. "We are seeing its acute impacts in Oregon, on the West Coast and frankly in the entire world."

'The Talk': Why Is the Show on Hiatus?