Gillian Triggs says the ongoing poor treatment of women is a great disappointment, and she is incredulous debates about gender equality are still taking place.

Speaking from Geneva, the former Australian Human Rights Commission president – now working for the United Nations’ refugee agency – has issued a call to arms for women to support each other in the fight for gender justice. 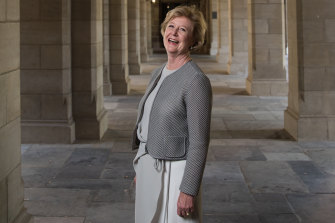 “I think we need a really strong movement, globally, to address the inequality of women,” Professor Triggs said. “We’ve talked about it for so long, but we are not actually implementing the policies to ensure that we end that inequality.

“And I think that women need to come together, we need to speak up, we need to be very strong.”

From Geneva, she has watched with dismay the recent furore over gender equity in Australia – including the treatment of women who work in our Federal Parliament – and the “regressions” in moving towards greater equality in many parts of the world.

‘I can hardly believe that I’m still having these conversations about the equality of women.’

“If I can speak personally, it is a great disappointment for my generation,” Professor Triggs said. “I can hardly believe that I’m still having these conversations about the equality of women. I thought the problem was fixed in the ’60s and the ’70s. It’s manifest that it isn’t. We’ve made progress, of course we have, but now we see a significant regression.”

During her five years leading Australia’s Human Rights Commission, from 2012 to 2017, Professor Triggs’ inquiries – including one into children in immigration detention – sparked criticism from the Coalition government, including by then immigration minister Scott Morrison and prime minister Tony Abbott.

She began her UN role in September 2019, spending the first months meeting the myriad agencies involved in refugee rights and protections. But since March last year, the work of humanitarian agencies has been severely hampered by the pandemic.

In 2020, 168 countries shut their borders to international travel – many making no exceptions for refugees.

“The pandemic has had a very significant impact on refugees and the more than 80 million people displaced globally,” Professor Triggs said.

International agencies are also concerned that many countries have responded to the global crisis with inward-looking nationalism.

“There are many, many countries that have simply gone into their own, into themselves [and] protected themselves, but really failed to do so in relation to the community generally,” Professor Triggs said.

“Perhaps what illustrates this point more than anything is that the overwhelming majority of vaccines have been bought by 10 countries, and are simply unavailable for continents like Africa.

“And that’s just a shocking realisation that despite all the agreements of solidarity, we’ve not actually seen it in something as important as COVID and if, in a global pandemic – a health pandemic which is no respecter of status or boundaries – if even in that context we’re struggling to achieve global collaboration, then we’ve clearly got a long way to go.”

Having recently returned from a trip to the Jordanian capital of Amman, she was moved to learn the country’s government will include – without question – its large refugee community in its vaccine program.

Before the pandemic struck, it was estimated there were roughly 80 million refugees across the world. Professor Triggs said that figure was probably closer to 100 million now and, when internally displaced people were included, the true figure could be hundreds of millions.

The UNHCR is preparing to issue new estimates for the global number of refugees, asylum seekers, stateless and internally displaced people.

“The question then is how to implement what we know is going to happen, or we think it’s very likely to happen in government policies.

“And of course, for some, the response to that is simply to close borders and to push back boats.”

Gillian Triggs will be guest speaker at this year’s UN and Australia Sustainable Partnerships Forum on Tuesday. Details: partnershipsforum.unaa.org.au