The identity of Q, the supposed top-secret government operative and prophet of the extremist ideology QAnon, has for years been a fiercely debated mystery. But a possible slip-up in a new documentary suggests the answer was always the most obvious one: Ron Watkins, the long-time administrator of the message board 8kun, the conspiratorial movement’s online home.

Most major QAnon researchers have long speculated that Watkins had written many of the false and cryptic posts alleging that former president Donald Trump was waging war against an elite international cabal of Satan-worshipping paedophiles. Watkins has long denied his involvement, saying he was merely a neutral backroom operator of the site and never a participant. 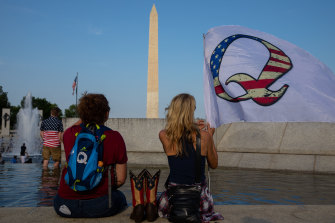 QAnon supporters wait for a military flyover at the World War II Memorial during 2020 Fourth of July celebrations in Washington.Credit:Evelyn Hockstein/The Washington Post

But in the Sunday finale for the HBO series Q: Into the Storm, filmmaker Cullen Hoback points to what he argues is a key piece of evidence that Watkins had lied about his role in the more than 4000 messages Q had posted since 2017.

In a final scene, after Watkins talked about how he had shared voter-fraud conspiracy theories after Trump’s loss in the 2020 elections, he told Hoback: “It was basically three years of intelligence training, teaching normies how to do intelligence work. It was basically what I was doing anonymously before, but never as Q.”

To Hoback, it was an inadvertent admission that Watkins had actually been Q, crafting secret communiques and shaping the movement for “normies,” or normal people, to consume. But in the scene, Watkins smiled and cleared his throat, seeking to correct – or further muddy – the record: “Never as Q. I promise. I am not Q.”

The evidence is circumstantial, and no proof affirms Watkins’ role. Watkins, for his part, messaged his 150,000 subscribers on the chat service Telegram late on Sunday, “Friendly reminder: I am not Q. Have a good weekend.”

But the revelation has reinvigorated debate about the clues of Watkins’ role in one of the biggest conspiracy-theory movements of the internet age.

Watkins and his father, 8kun owner Jim Watkins, were the only people who could boast of a behind-the-scenes dialogue with the nameless prophet, and QAnon’s rise had served to give the bizarre duo a level of attention and infamy that they seemed to relish in video live streams and online posts.

The core anonymity and opaque operation of 8kun, however, seemed to make identifying Q impossible, even as the movement trended toward violence and was cited as inspiration by many of the Trump supporters who rioted at the Capitol on January 6.

As QAnon’s following grew, Q never seemed to show any interest in sharing his exclusive intelligence “drops” anywhere but 8kun, a rickety online watering hole – even when the site, formerly known as 8chan, went offline for nearly three months after a series of mass shootings in 2019.

It was also unclear why such an elite strategic mastermind – with a prized view into the engine of Trump’s secretive war – would trust only a father-son duo, living in the Philippines, whose main claim to fame was a crude website of hate speech, pornography and extremist memes.

For some researchers, the admission does not resolve all lingering questions about Q. Some argue persuasively that, while Ron Watkins likely knows who is behind QAnon, the account could be driven by more than one person, or a team of writers crafting messages for public display.

“It is a collective ensemble of different interested parties that have different levels of knowledge and different access points to the infrastructure,” said Joan Donovan, director of the Technology and Social Change Project at Harvard Kennedy School’s Shorenstein Centre. “There’s no single person who could be Q.”

It also does not resolve the true birth story of Q, which first posted on 4chan in 2017 – amid a flurry of anonymous troll posts from purported Trump-administration insiders – before moving to 8chan and the Watkins’ control in 2018. Some researchers point to differences in writing styles at that time to suggest the Q persona changed hands.

On a live stream last week, Ron and Jim Watkins proposed an alternative explanation: that Q was either Stephen Bannon or Hoback himself. (Neither Bannon or Hoback responded immediately to requests for comment.)

The documentary, however, made few waves in the online circles frequented by QAnon believers. Nearly all of the most popular QAnon discussion boards and Telegram channels ignored the Watkins interview, instead focusing on the movement’s latest topics of interest, mostly involving conspiracy theories about coronavirus vaccines, President Joe Biden and the Suez Canal.

Q, who once posted several times a day, hasn’t said a thing since December 8. But the movement in many ways has outgrown Q, by having elevated a widespread corps of QAnon promoters, merchandisers and social media influencers who offer their audiences a flurry of absurd conspiracy theories and far-right talking points.

To many researchers, the identity of QAnon’s leader is less important now than what the rise of QAnon says about the internet: How it can give global reach to conspiracy theories and rally people to believe incredible, impossible things.

“At the end of the day, the HBO documentary ends exactly where we were before: That Ron Watkins is the one with the ability to be Q or know Q, and that perhaps his father Jim Watkins also played some role in continuing the Q persona … The ‘definitive proof’ is still missing,” said Rita Katz, executive director of SITE Intelligence Group, which monitors online extremism.

“Even if it was only Ron Watkins, the movement has grown far beyond one person or alias. It is now a global societal virus that has become a vessel for everything from [anti-vaccine] misinformation and coronavirus conspiracy theories to political agendas,” Katz added. But “everything Jim or Ron Watkins say should be taken with scepticism – even if that statement comes in the form of a bizarre ‘slip-up’.”