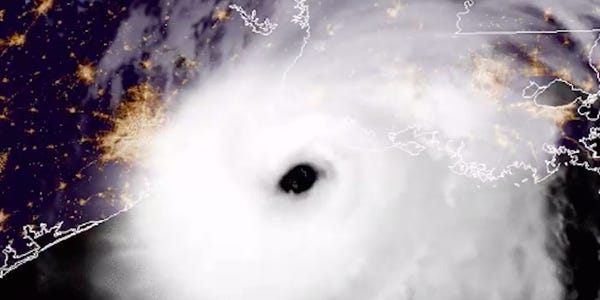 A Louisiana sheriff's department in the path of Hurricane Laura told residents that if they don't evacuate from the hurricane's path they should keep identifying details on their body in case they die.

The Vermilion Parish Sheriff's Office said in a statement on Facebook Wednesday that certain areas were under a mandatory evacuation order.

It warned people who are staying behind that it will be too unsafe to start any rescue efforts immediately.

"Those choosing to stay and face this very dangerous storm must understand that rescue efforts cannot and will not begin until after storm and surge has passed and it is safe to do so."

"Please evacuate and if you choose to stay and we can't get to you, write your name, address, social security number and next of kin and put it a ziplock bag in your pocket."

It added: "Praying that it does not come to this!"

"Expecting the worse but praying for the best. Be Safe and God Bless!!"

Hurricane Laura made landfall over southwestern Louisiana as a Category 4 storm at 1 a.m. CT on Thursday.

It later weakened to a Category 3 storm, with 120mph winds and the National Hurricane Center warning of "unsurvivable" storm surge and "extreme" winds, as well as heavy rain, flash flooding, and tornadoes.

You can follow updates on the storm's path and warnings here.

This the the National Hurricane Center's prediction for the storm's path as of early Thursday.