A THOUSAND Afghan evacuees face being left behind by Britain: Workers and their families who cannot make it through chaos at airport will be left to Taliban when ‘freedom flights’ end on Thursday

More than 1,000 brave Afghans who stood shoulder to shoulder with British troops against the Taliban face being left behind when mercy flights cease.

As the evacuation operation entered its final hours, sources told the Mail that several hundred workers and their families are likely to be left in the country because they cannot get through the chaos in Kabul.

With hopes fading of an extension to President Joe Biden’s August 31 deadline, sources said that the ‘freedom flights’ may only continue until Thursday – even under the best case scenario.

Yesterday, ministers outlined plans to extract about 6,000 UK nationals and eligible Afghans before the operation is wound up.

But there are about 7,000 who Britain would ideally like to rescue – a scenario which could result in more than 1,000 being left behind. 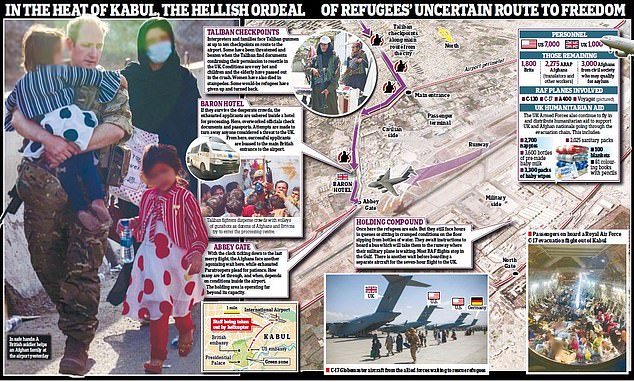 More than 1,000 brave Afghans who stood shoulder to shoulder with British troops against the Taliban face being left behind when mercy flights cease

Many have already tried to get to sanctuary at Kabul airport but have been unable to make it through the chaotic queues or have simply been turned away. Others are still in hiding, unwilling to run the gauntlet of Taliban checkpoints.

‘Private’ flights to safety set up by US donors

Six wealthy US citizens are funding a private mission by ex-special forces to fly 5,600 Afghans out of Kabul in eight days.

The plan is to extract Afghan soldiers and police officers – along with their families – who are currently in hiding.

Anonymous benefactors have donated more than $500,000 (£365,000) to an operation dubbed the Wings of Eagles, which will fly 700 out of the country each day until the August 31 deadline.

Former US special forces are particularly keen to rescue members of the Afghan commando anti-terrorism units who they trained since 2003.

The operation is being run by Ark Salus, a veterans charity in Alabama.

Its director Peter Quinn, a former helicopter pilot and intelligence officer who served five tours in Afghanistan, said: ‘We have a moral obligation to our fellow Afghan warriors to safeguard them, their wives and children, and rescue them from Kabul, just as they have brought us home to our families.’

He said local soldiers are currently communicating from safe houses until they can be rescued.

‘They’ve shed their uniforms,’ Mr Quinn said. ‘They are in hiding, and waiting to know when to get to the airport.’

The Wings of Eagles mission is not charging Afghan passengers for places on their planes. However, a number of other private operations have been selling seats for up to £75,000 each.

Speaking to BBC Radio 4’s Today programme yesterday, Mr Quinn said: ‘We’re constantly flying aircraft. We’re going to be doing as many as we can, as long as we can, until the US government pulls out of Kabul. That’s 700 Afghans a day for the next eight days.

‘We have six private investors who are fed up with what is happening in Afghanistan. We are not waiting for permission, we are taking action.’

Among the 1,000 whose fate is uncertain are as many as 100 interpreters who served with British forces.

According to campaigners, these translators and their families could number 600 in total.

About another 50 translators have not replied to requests from UK officials to report to Kabul airport, raising fears they are missing or may too scared to travel.

One translator, Shir, 46, said last night: ‘The risk is so great to my family that I don’t know if we can leave our hiding place.

‘The Taliban are knocking on doors and beating people to find out where the translators are.’

Meanwhile, 12 who had been told they can relocate to the UK only for their approval to be withdrawn are planning a legal challenge. But their cases are unlikely to be resolved in time.

That is the tragic reality now facing UK ministers and military chiefs as the hours tick down towards the deadline for Western forces to leave the country.

Unless Boris Johnson can persuade Mr Biden to extend the deadline, British military planners will stop processing these additional cases in the coming days and will focus on their own plans to pull out.

The end game was also spelled out by Defence Secretary Ben Wallace who described the timeframe available yesterday as ‘hours not weeks’ and urged already overworked officials at Kabul airport to ‘exploit every minute’.

The Mail learned last night that the best case scenario for ‘freedom flights’ is that they are able to continue until Thursday or Friday.

But according to sources this depends on highly complex plans for the withdrawal from Afghanistan of about 10,000 international military personnel being approved by the Pentagon.

Late last night, British ambassador to Afghanistan Sir Laurie Bristow warned that staying past the current deadline may not be realistic and risked provoking the Taliban.

He said that the militant group’s leaders were being ‘pretty uncompromising’ in wanting the evacuations to cease by Mr Biden’s August 31 deadline.

Hopes of an extension hinge on today’s G7 meeting at which the PM will urge Mr Biden not to withdraw his troops on August 31.

US officials said yesterday that while they are in dialogue with the Taliban, no ‘specific discussions’ had taken place with the militants about the evacuation programme being extended into September.

Taliban leaders yesterday described August 31 as a ‘red line’ and warned Western forces would face reprisals if they sought seek to continue their ‘occupation’.

The pace at which UK forces are able to process applications and get British citizens and Afghans continued to accelerate yesterday with the Government confirming 1,300 had been evacuated in the previous 24 hours.

This was achieved in spite of security at the airport deteriorating.

Western diplomats described scenes there as ‘chaotic’ after an Afghan soldier was shot dead by unknown gunmen.

There were also further reports of Taliban brutality towards British interpreters and their families who are seeking to flee the country.

The UK also announced yesterday that 7,109 individuals had been evacuated from Afghanistan as part of the mission, codenamed Operation Pitting. 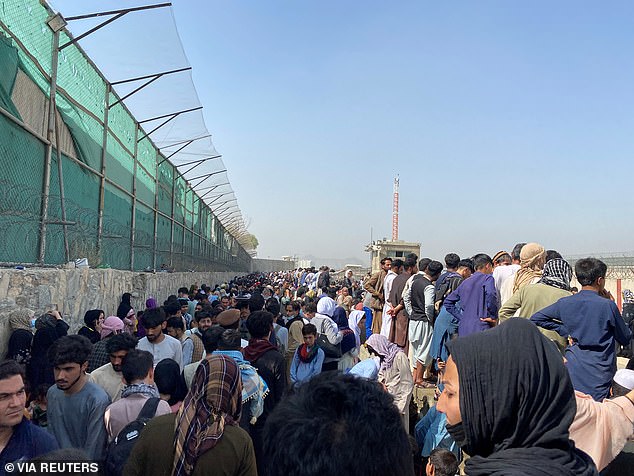 With hopes fading of an extension to President Joe Biden’s August 31 deadline, sources said that the ‘freedom flights’ may only continue until Thursday – even under the best case scenario

This includes embassy staff, UK nationals, those eligible under the government Afghan Relocation and Assistance Policy (ARAP) and nationals from partner nations.

Defence minister James Heappey said: ‘The fact is we will get out as many as we possibly can.

‘But we have been clear throughout that there is a hard reality that we won’t be able to get everyone out that we want to. 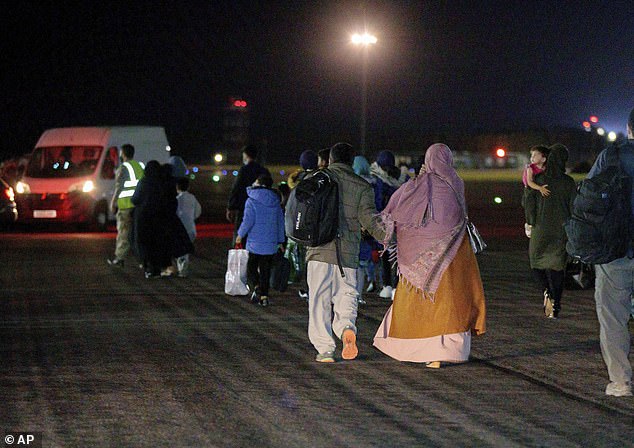 Yesterday, ministers outlined plans to extract about 6,000 UK nationals and eligible Afghans before the operation is wound up 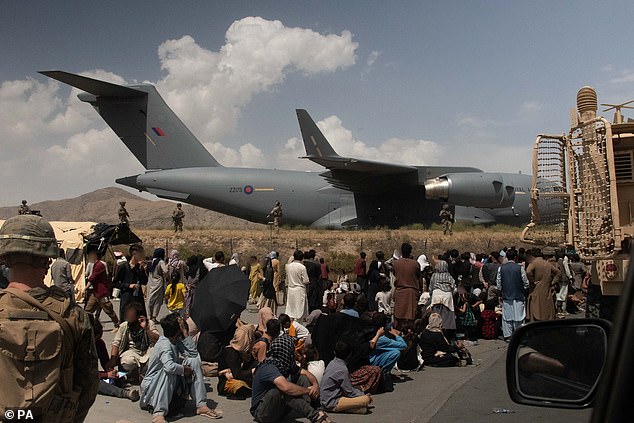 There are about 7,000 who Britain would ideally like to rescue – a scenario which could result in more than 1,000 being left behind

Yesterday, Mr Wallace said he would not speculate on the numbers who would be left behind.

He said: ‘If we get more days, we get more people out, if the flow improves at the gates.

‘If there was a security concern and we had to seal the gate, suddenly you lose hours, you lose people, so all of that is up in the air.

‘We have got out a significant number over the last few weeks and we’ll continue to do so.

‘The speed at which we have to leave, the challenges around crowds of many people, who don’t meet any criteria but who are trying to get out of the country, creates real problems for us, and therefore I’ve been very clear – everyone won’t get out.’

'Little House on the Prairie's' Melissa Gilbert Admits She Had an Affair With John Cusack To Get Back at Rob Lowe: 'It Was My Own Private 'Screw You''

Courtney Stodden Comes Out as Non-Binary: 'My Spirit Is Fluid'

Lol, the Teens in the 'Dash & Lily' Cast Haven’t Been Teens in a Long Time