Almost half of Brits are feeling nervous at the prospect of holidaying abroad this summer as Britain prepares to unlock foreign trips next month, according to new data.

Figures published by Ipsos MORI found that 49 per cent of people surveyed were feeling uneasy at the thought of going abroad to enjoy their holidays.

By comparison, just 23 per cent of Brits felt the same way about going on holiday in the UK.

With only weeks to go before the Government gives the green light for Brits to spend time abroad this summer, the new data found that this prospect is making people more nervous than almost anything else. 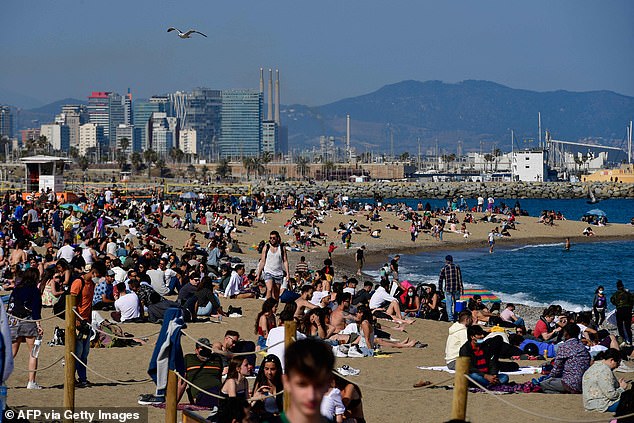 Figures published by Ipsos MORI found that 49 per cent of people surveyed were feeling uneasy at the thought of going abroad to enjoy their holidays. Pictured: Barcelona beach on April 3

The only other concern that came close to travelling abroad for Brits was the idea of attending large public gatherings such as sports or music events – which also left 49 per cent of people feeling nervous.

Despite this, more than three quarters of people surveyed admitted they would now feel comfortable about spending time in another person’s house.

While more than half also said they had no problems with going back to bars and restaurants or visiting museums and exhibitions.

In order to gather their data, Ipsos MORI interviewed 1,078 adults between the ages of 18 and 75 in Britain.

Their research also focused on how well different age groups in Britain were continuing to follow all coronavirus restrictions.

Those aged 18-34 had the smallest proportion of people still following all of the rules. 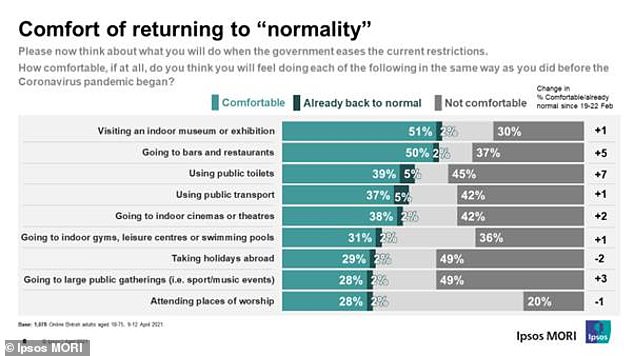 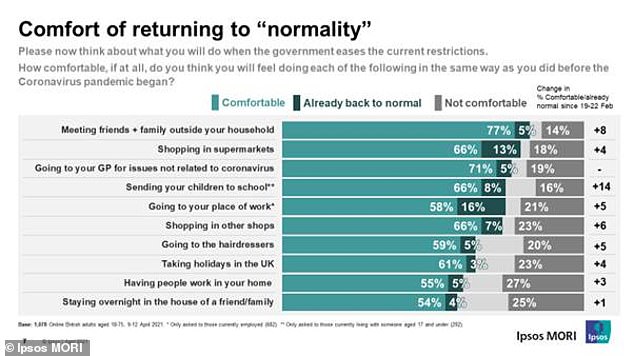 And while the percentage of those aged 55-75 still following Government guidance was higher than either of the two younger age brackets, the older people had also seen the greatest drop in the number of people sticking to the rules since January 2021.

Over the last four months, the proportion of people aged 55-75 who were still following the lockdown rules had fallen from 58 per cent to 40 per cent.

This coincides with Britain’s vaccination drive, which saw older people who wanted the vaccine receiving their doses first.

A total of 38,792,402 Covid-19 vaccinations have taken place in England between December 8 and April 24, according to NHS England data, including first and second doses, which is a rise of 602,866 on the previous day.

Gideon Skinner, Head of Political Research at Ipsos MORI, said: ‘The success of the programme to bring down COVID infections, and the accompanying easing of restrictions, is clearly having an impact on the public mood.

‘People are feeling more comfortable with the prospect of meeting their friends and family, sending their children back to school, going back to work and other aspects of normal life – including going out for a drink and getting their hair cut.

‘But this comes with a risk – the proportion of people who say they are completely following the government’s rules has fallen since its peak in January, especially among older age groups.

‘The vast majority still say they are mostly following the rules, but the Government will want to watch this closely to ensure that this emerging optimism can be sustained.’

The findings come as travel experts have warned summer holidays could be under threat if the Foreign Office advises against travel to green list countries.

The Government is preparing to lift the ban on international travel on May 17 and is finalising plans for a ‘traffic light’ system to determine which countries will be authorised destinations. 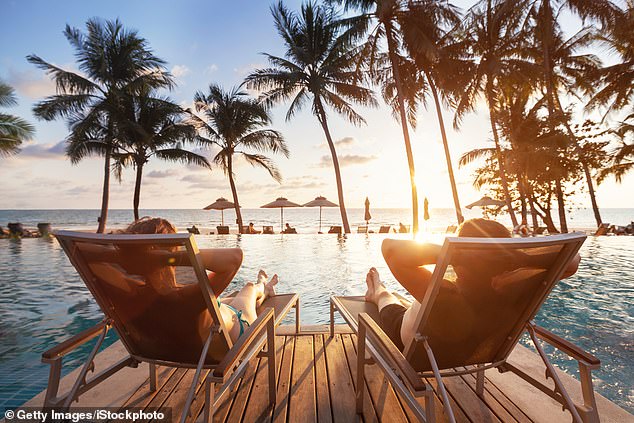 With only weeks to go before the Government gives the green light for Brits to spend time abroad this summer, the new data found that this prospect is making people more nervous than almost anything else (stock image)

However, experts have warned of confusion because the Foreign Office is expected to publish its own advice which could differ from the traffic light system.

This means if the Foreign Office advises against travel to a certain country, even if it is permitted by the traffic light system, holidaymakers could see their plans disrupted.

Most holiday companies will not operate services in countries the Foreign Office has advised against visiting and going to a country against government guidelines will also invalidate travel insurance.

According to the Times, even destinations on the green or amber list – where travel is permitted – could be off-limits if the Foreign Office advises against travelling to them.

Their advice is based on factors such as the risk of individuals getting stuck by Covid restrictions or the capacity and quality of the country’s health services. 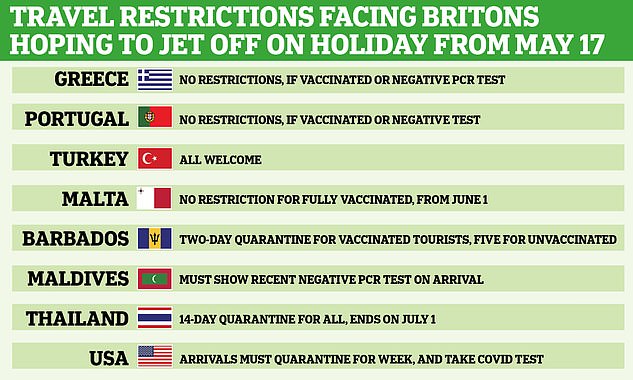 Airlines UK boss Tim Alderslade told The Times: ‘Green and amber countries should not be caught up in additional travel advisories.

‘We need to see alignment between the Foreign Office advice and traffic light system to provide ­clarity and transparency to consumers and operators.’

A Foreign Office source said: ‘Travel advice is an independent assessment of the risk [to] Brits travelling aboard. It’s independent, trusted advice and will remain so.’

The Government is expected to finalise its traffic light system in the coming weeks with green countries set for restriction-free travel while amber countries will mean people must self-isolate at home for ten days on their return.

Travellers from red list countries will be required to quarantine at a hotel. Most European countries are expected to be on the amber list.

Countries expected to be on the green list include Portugal, Dubai and Malta.

Men have been lied to about Valentine’s Day

Are recycling centres and rubbish tips open? – The Sun

Nick Jonas & Priyanka Chopra Will Beat His Brother Joe Down The Aisle — Is Sophie Turner Upset?