WASHINGTON is poised to abandon punitive tariffs on British steel today as ministers pin their hopes on striking a trade deal before the next election.

International Trade Secretary Anne-Marie Trevelyan declared last night that there had ‘definitely’ been a change of approach from Joe Biden, who put talks on the backburner when he entered the White House.

In an interview with the Daily Mail, she said that after having no appetite for a deal in January 2021, his administration had ‘leaned in’ to the idea. 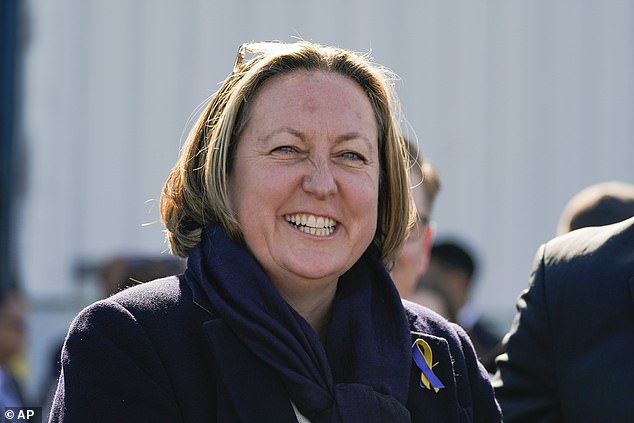 UK Secretary of State for International Trade Anne-Marie Trevelyan arrives at a news conference at the Port of Baltimore, Monday, March 21

Mrs Trevelyan, who is on a two-day visit to Baltimore, believes formal negotiations on an agreement may begin by the end of this year, with the expectation that they could be completed within 18 months.

In a boost for trade between the two countries, the US is expected to agree to remove tariffs on British steel and aluminium exports that have been in place since 2018.

In return, the UK will drop retaliatory tariffs on American brands such as Harley-Davidson. The trade dispute has been a longstanding thorn in relations between the two allies. 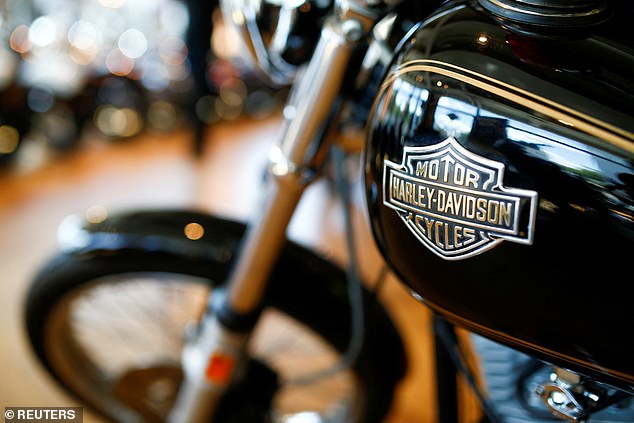 American motorcycle manufacturer Harley-Davidson was hit by UK tariffs in retaliation for the steel tariffs, now set to ease

Under Donald Trump, the US imposed a 25 per cent duty on foreign steel and 10 per cent tax on foreign aluminium.

Washington agreed to roll back tariffs on such imports from the EU last year.

Mrs Trevelyan said she had ‘kicked off’ and that the US had listened.

She added: ‘I came over just before Christmas and pointed out that it was not OK for them to still be hanging over us.’

The Trade Secretary is holding meetings with her US counterparts – trade representative Katherine Tai and commerce secretary Gina Raimondo – as part of a special conference being held in Baltimore on the future of Atlantic trade.

She described the gathering as a fantastic next step – getting into the ‘nitty gritty’ of what is important to both sides before beginning formal negotiations.

Mrs Trevelyan said there was now a ‘really positive energy’ around the talks and that the crisis over Russia’s war in Ukraine had highlighted the closeness of the two sides.

‘We have worked hand in glove with the US in the last month, looking at sanctions. So I’m very optimistic,’ she added.

The minister said that when she was appointed last September, there was ‘no appetite’ in the White House to do a trade deal, but this had definitely changed.

She added: ‘Team Biden have leaned in and want to get going on getting our trade teams talking more fully about the issues that are important to both of us.’

Mrs Trevelyan believes the two sides will soon start formal negotiations on a trade deal that is ‘so much bigger and chunkier than anything else’ done before.

‘This is the first crystallising point of that next step… I will be really pleased if we can start them by the end of the year,’ she said, adding that the talks could go at pace.

The minister added: ‘Could one do it in a year? Maybe, but I would have thought 18 months is probably, once one gets going, realistic. But it depends on the vagaries of politics and political life.’ 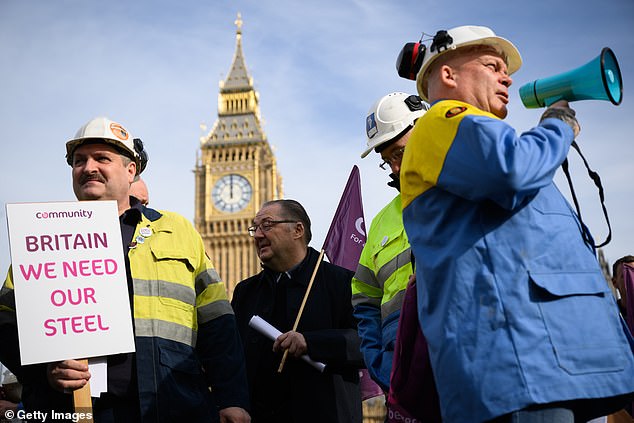 Steelworkers hold placards and flags as they protest in Parliament Square on March 15, 2022 in London. The Community Union have long campaigned to save the British Steel Industry.

The UK has also begun discussions with individual states – including Indiana, Oklahoma, North Carolina and South Carolina – on mini trade deals, with the first expected to be signed within months.

These would not slash tariffs on imports or exports, but remove red tape – for example by making it easier for professionals to work between these states and Britain.

Mrs Trevelyan yesterday visited the Port of Baltimore, where 10 per cent of the cargo arriving is from the UK.

During the trip, Ben Cardin, a Democratic senator for Maryland, urged the Biden administration to get on with negotiations on a trade deal with Britain.

‘You are a great partner in so many ways. Now we are in this battle to save democracy in regard to [Vladimir] Putin’s invasion of Ukraine, it’s even more important than ever that we unite the free world.’

Who is Yulia Skripal and the two named Russian suspects of the Salisbury nerve agent attack? – The Sun

Is Three Mobile down? How to check the status in your area