Home » World News » American troops are pouring back into Syria

Washington: Every day in north-eastern Syria, waves of American troops are pulling out under President Donald Trump's order this month.

That order famously paved the way for a Turkish offensive that included assaults on the Pentagon's allies, the Syrian Kurds.

And at the same time, a separate wave of American troops from the opposite direction is pouring back in. 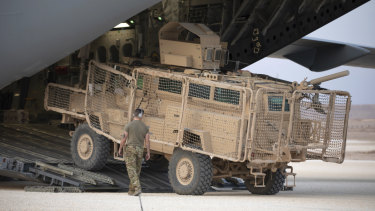 A US vehicle prepares to be loaded onto a cargo plane at the Kobani Landing Zone on its way out of Syria last week. Credit:US Army/AP

In fact, once the comings and goings are done, the total number of US forces in Syria is expected to be about 900 — close to the 1000 troops on the ground when Trump ordered the withdrawal of American forces from the country.

"It's damage control," said Alexander Bick, a fellow at the Woodrow Wilson International Centre for Scholars, who oversaw Syria issues at the National Security Council in the Obama administration. "But the damage is already done in terms of partners' alarm at the capriciousness of US policymaking, a strategic reshuffle along the Turkish border and the overwhelming sense that the United States is on its way out." 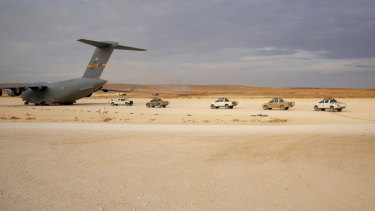 American vehicles line up to be loaded onto a cargo plane as part of the deliberate withdrawal of coalition forces from northern Syria last week.Credit:US Army Reserve/AP

In the three weeks of political and military turmoil that upended the administration's Syria policy, the United States has deserted its pivotal Kurdish ally; ceded territory the Kurds had controlled to Syria, Turkey and Russia; and opened the door for a possible Islamic State resurgence despite the death of its leader, Abu Bakr al-Baghdadi, in an American commando raid last Saturday.

The dizzying set of deployments of American troops passing one another on the roads and in the skies of northern Syria started earlier this month when Trump ordered back in a force to protect the region's coveted oil fields from the Islamic State, as well as from Syria and Russia.

On October 6, the day Trump spoke to President Recep Tayyip Erdogan of Turkey and gave tacit approval for a Turkish military invasion, the American military had around 1000 troops in Syria. The Pentagon had, for nine months, played down that presence, hoping Trump would not focus on the extent to which the US military was continuing to fight the Islamic State despite his order in December to pull out. 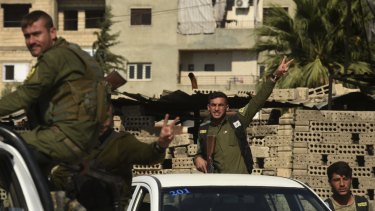 Kurdish men belonging to Asayish, the internal security force make the peace sign whilst providing extra security on the streets on the streets of Qamishli in north-east Syria.Credit:Kate Geraghty

After his phone call with Erdogan, Trump ordered the US troops fighting alongside the Kurds in north-eastern Syria to withdraw, lest they get in the way of the Turkish incursion. Defence Department officials pulled out about 50 American service members.

On October 13, Defence Secretary Mark Esper told CBS's Face the Nation that Trump was ordering the remaining US forces out of northern Syria. "We have American forces likely caught between two opposing, advancing armies, and it's a very untenable situation," he said.

Trump affirmed his order on Twitter. "Others may want to come in and fight for one side or the other," he tweeted in a possible reference to Russia. "Let them!" 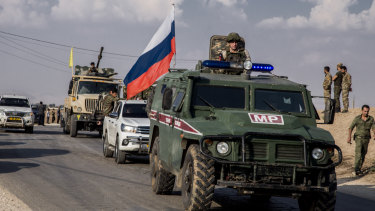 Kurdish forces withdraw from from an area near Turkish border with Syria, overseen by the Russian forces.Credit:AP

By October 14, the sentiment started to shift. Republican allies expressed outrage over Trump's withdrawal order. Hundreds of IS prisoners either escaped or were freed from detention in northern Syria, as Kurds turned their attention to fighting for their own survival. And Pentagon officials continued to argue to the President that the victory of the IS was in danger of being reversed.

Trump, in a statement, said American troops "coming out of Syria will now redeploy and remain in the region to monitor the situation and prevent a repeat of 2014, when the neglected threat of ISIS raged across Syria and Iraq." More significantly, Trump also announced that the American troops in the south, at al-Tanf, would remain "to continue to disrupt remnants of ISIS."

By October 20, things were shifting again. Trump was talking about the need to protect the oil fields in eastern Syria. Pentagon officials began working on a plan to send additional US troops to guard oil fields.

Five days later, at a news conference in Brussels, Esper said the US would "maintain a reduced presence in Syria and deny ISIS access to oil revenue." He said the additional steps would include some "mechanised forces," which other defence officials said would include tanks.

As of this week, at least half of the original 1000 American troops in Syria have left, and more will continue to fly or drive out until roughly 250 of that original group are left, largely around Deir al-Zour in the south. Meanwhile, the first few hundred infantry troops, soon to be joined by mechanised troops and possibly a few tanks, have driven in from Iraq. Defence officials said the total number of American troops guarding the oil fields would be around 500.

The combined number of nearly 900 could easily rise if, as expected, the IS begins to make a comeback.

"We're under no illusion that they will go away because we killed Baghdadi," said General Kenneth  McKenzie Jnr, the head of the military's Central Command, during a Pentagon news conference on Wednesday. "Since it's an ideology, you will never be able to stamp it out."