Washington: Weighing withdrawal from the Iran nuclear deal, US President Donald Trump declared on Tuesday, US time, that if the Iranians "restart their nuclear program, they will have bigger problems than they've ever had before".

Trump issued his warning alongside French President Emmanuel Macron in the Oval Office, where the two allies were meeting to discuss the multinational nuclear accord, the war in Syria and other issues during a day of meetings at the White House. 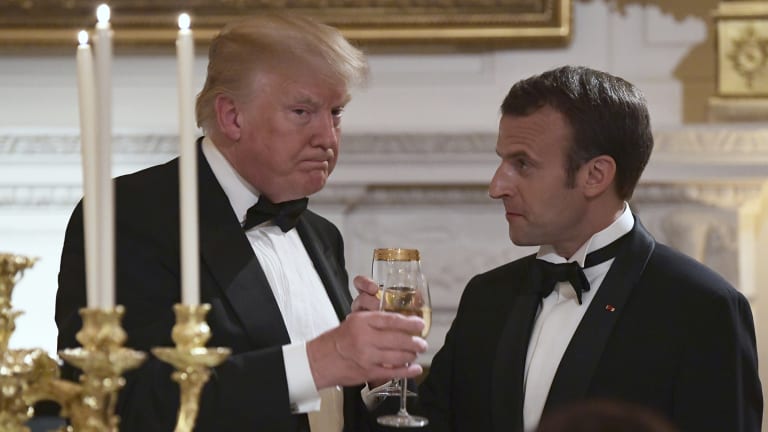 Donald Trump, left, and Emmanuel Macron, share a toast during the State Dinner at the White House.

It was unclear whether Macron made substantial progress in his efforts to prevent Trump from pulling out of the 2015 deal.

At a news conference with Macron, the US President kept up his blistering rhetoric against the accord between Iran and world powers that he says does not address Tehran's rising influence in the Middle East or its ballistic missile program.

He called it insane, terrible and ridiculous.

"This is a deal with decayed foundations," Trump said. "It's a bad deal. It's falling down."

"If Iran threatens us in any way, they will pay a price like few countries have ever paid," Trump said but he also said: "We will have a great shot at doing a much bigger, 'maybe deal, maybe not' deal."

In a news conference broadcast on state television on Tuesday, the secretary of Iran's Supreme National Security Council, Ali Shamkhani, said the Atomic Energy Organisation of Iran was ready for some "surprising actions" if the nuclear deal was scrapped.

With a May 12 deadline looming for Trump to decide on restoring US economic sanctions on Tehran, Macron said he spoke to Trump about a "new deal" in which the United States and Europe would tackle the outstanding concerns about Iran beyond its nuclear program.

Macron is using a three-day state visit to the United States as a high-stakes bid to salvage the Iran nuclear deal, which many in the West see as the best hope of preventing Iran from getting a nuclear bomb and heading off a nuclear arms race in the Middle East.

Macron told reporters that he and Trump would look at the Iran deal "in a wider regional context," taking into account the situation in Syria.

"We have a common objective, we want to make sure there's no escalation and no nuclear proliferation in the region. We now need to find the right path forward," Macron said.

Under Macron's proposal, the US and Europe would agree to block any Iranian nuclear activity until 2025 and beyond, address Iran's ballistic missile program and generate conditions for a political solution to contain Iran in Yemen, Syria, Iraq and Lebanon.

The French believe progress had been made.

"What was important and new this morning was that President Trump was OK with putting on the table, with France, the idea of a new agreement that should be proposed to, and worked on with, the Iranians," a French official said.

It was unclear what that would mean for the fate of the 2015 accord and whether the other countries that signed it, such as China and Russia, would agree to new measures against Iran.

German Chancellor Angela Merkel was expected to also make a case for the accord during a lower-key visit to the White House on Friday.

A source familiar with the internal debate at the White House said one option under discussion was giving Europe more time to toughen the terms of the current Iran deal.

Iran has said it will ramp up its nuclear program if the deal collapses and a senior Iranian official said Tehran might quit a treaty designed to stop the spread of nuclear weapons if Trump scrapped the agreement. 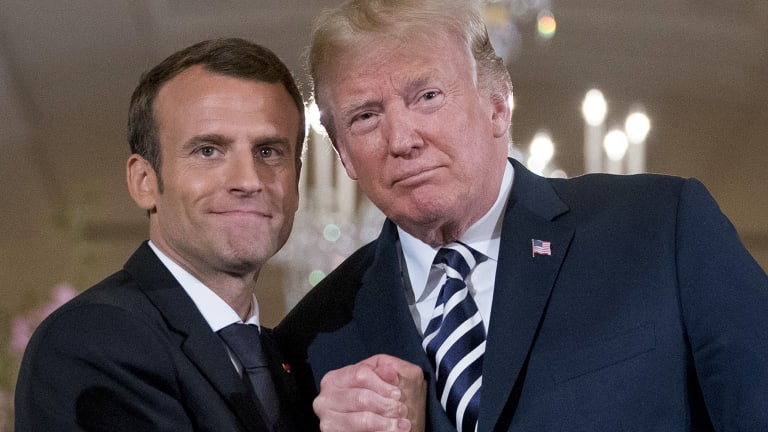 Trump and Macron embrace at the conclusion of their Tuesday news conference.

Trump and Macron have developed a strong relationship at a time when many European leaders have kept a certain distance from Trump.

"On both sides of the ocean some two years ago, very few would have bet on us being here together today," Macron told Trump in a toast at a glittering state dinner, Trump's first since he took office in January 2017.

"I got to know you. You got to know me. We both know that none of us easily changes his mind," Macron said with a smile.

Trump, 71, and Macron, 40, were remarkably chummy through the day, repeatedly shaking and grabbing each other's hands, exchanging kisses on the cheek and slapping each other's backs.

At one point in the Oval Office, Trump brushed what he said was dandruff from Macron's jacket, saying: "We have to make him perfect – he is perfect." 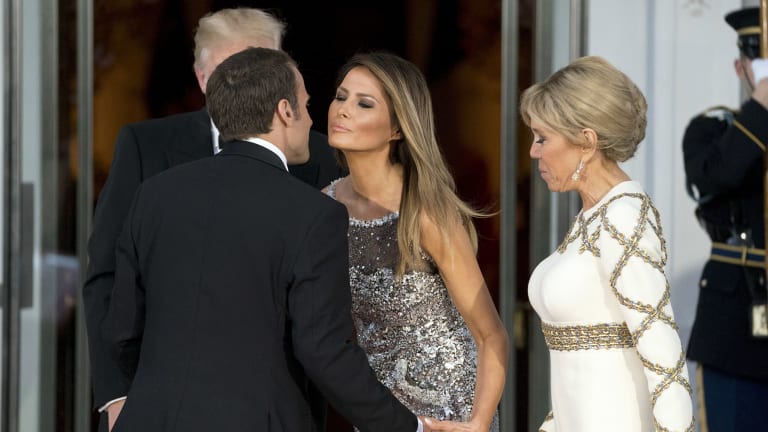 Melania Trump greets Emmanuel Macron as he and his wife Brigitte Macron arrive for the State Dinner at the White House.

Later on Tuesday, Trump hosted Macron at a formal candlelit dinner featuring spring lamb and New Orleans-style jambalaya before a performance by the Washington National Opera.

More than 1200 fragrant branches of cherry blossom filled the hall. 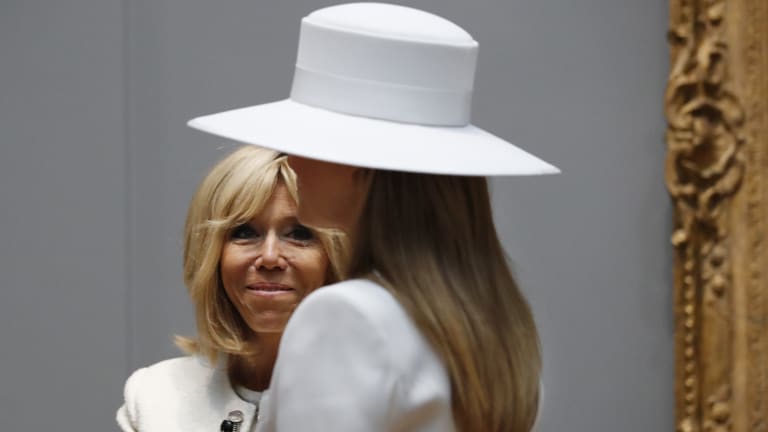 French First Lady Brigitte Macron, left, smiles at her counterpart Melania Trump as they tour the National Gallery of Art, in Washington.