Joe Biden faces the most important decision of his five-decade political career: choosing a vice president.

The presumptive Democratic presidential nominee expects to name a committee to vet potential running mates next week, according to three Democrats with knowledge of the situation who spoke on the condition of anonymity to discuss internal plans.

Biden, a former vice president himself, has committed to picking a woman and told donors this week that his team has discussed naming a choice well ahead of the Democratic convention in August.

Democratic Party insiders have weighed in on which candidate has the best odds to join Biden’s ticket, with Senator Amy Klobuchar of Minnesota as the most likely pick. 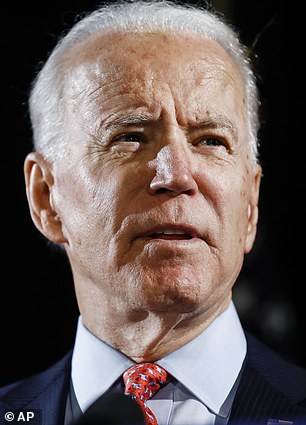 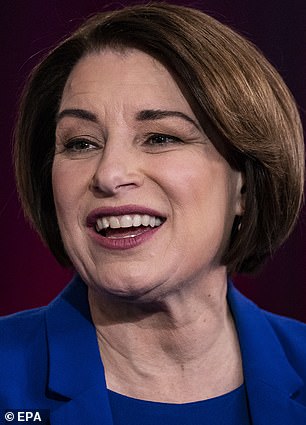 Party oddsmakers give the former presidential candidate a 5 to 2 shot of being picked by Biden, according to the New York Post.

Klobuchar helped Biden secure the nomination after she bowed out of the race just before Super Tuesday and endorsed the former vice president.

That allowed Biden to consolidate support from the moderate wing of the party and overtake his progressive opponent, Senator Bernie Sanders of Vermont.

Insiders give Michigan Governor Gretchen Whitmer, who has emerged on the national stage while leading the key Midwestern state through the coronavirus crisis, a 4 to 1 chance of being tapped by Biden.

Michigan is a crucial swing state that President Trump won in 2016, setting the stage for his shock victory over Hillary Clinton.

Whitmer has won plaudits during the pandemic and meshes with Biden’s pragmatic sensibilities, winning her post in 2018 with promises to ‘fix the damn roads.’

But it’s not clear that a 48-year-old white woman from the Midwest brings Biden advantages he doesn’t already have or can’t find elsewhere. 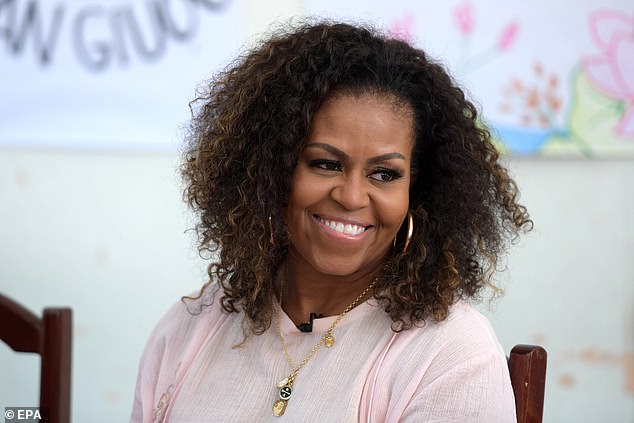 While party insiders acknowledge it’s a longshot, they are still holding out hope that former First Lady Michelle Obama (seen above in December 2019 in Vietnam) can be persuaded to be Biden’s running mate

Some Biden advisers said the campaign has heard from many Democrats who want a woman of color.

Yet there´s no firm agreement that Biden must go that route.

Senator Kamala Harris of California is considered a 9-to-1 shot of being named to the ticket, according to insiders.

While Harris, whose father is Jamaican and whose mother is Indian, would likely galvanize African Americans, she may deter progressive voters who cite her record as a former prosecutor.

Biden has regularly praised Harris, a former rival who endorsed him in March and campaigned for him.

When she introduced him at a fundraiser this week, Biden did little to tamp down speculation about her prospects.

At 55, Harris is talented and popular with Democratic donors, a valuable commodity for a nominee with a fundraising weakness.

But she´s also a former prosecutor who faces the same skepticism among progressives as Biden.

Meanwhile, her home state is already firmly in the Democratic column and could make her an easy target for Republicans eager to blast the party as too liberal.

Abrams, 46, is a star for many younger Democrats, a group Biden struggled to win over in the primary.

And she could help turn Georgia into a genuine swing state. But the highest post she’s ever held is minority leader in the Georgia House of Representatives, a possible vulnerability in a time of crisis.

Party insiders say that Senator Tammy Duckworth of Illinois could be a dark horse candidate.

Duckworth is a 52-year-old woman who lost both of her legs while serving in Iraq. 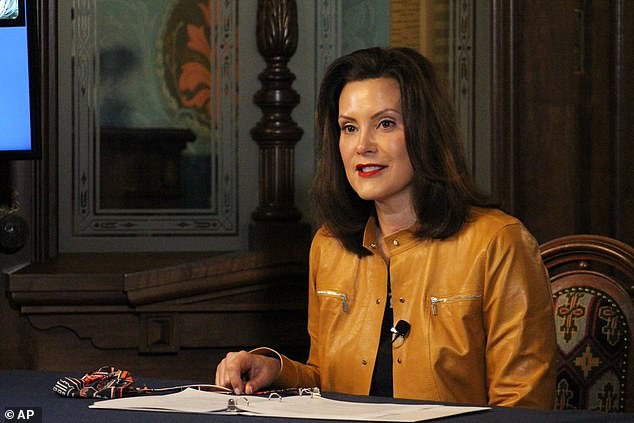 One intriguing name that has kept popping up in conversations among insiders is Michelle Obama.

The former first lady is believed to be repulsed by the idea, but party officials think her husband’s former No. 2 would be smart to kick the tires.

‘If they’re smart, they will beg her to do it,’ a senior Democratic insider told the Post.

‘And there is a really strong case to be made that she should,’ another party insider said.

Democratic observers in the know say the odds of a Biden-Obama ticket are 15 to 1.

Senator Elizabeth Warren of Massachusetts was once thought to be a favorite, given her progressive credentials.

Party oddsmakers give her a 20-to-1 shot of being picked by Biden for the vice presidential slot.

Warren could offer a bridge to progressives, but several Democrats said her age, 70, is a bigger liability than potential policy differences with Biden.

Stacey Abrams, who made history in 2018 as the first African American woman to be a major-party candidate for governor, has a 25 to 1 chance of being named as Biden’s No. 2.

Abrams gained a national following after she narrowly lost to Brian Kemp, the current governor of Georgia, in 2018.

She did not concede the election, claiming that Kemp, who was secretary of state and was thus in charge of the same election he was competing in, engaged in voter suppression.

Abrams, 46, is a star for many younger Democrats, a group Biden struggled to win over in the primary. 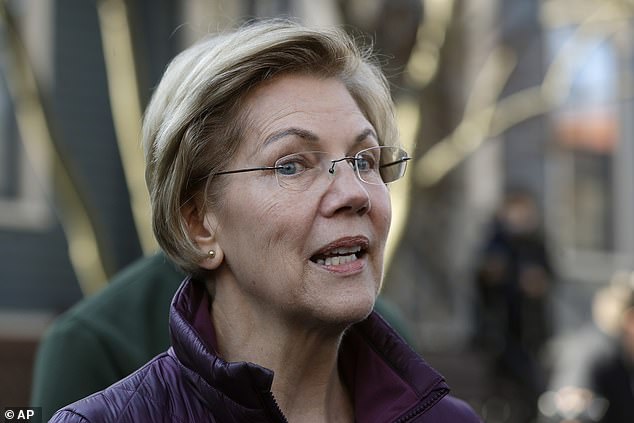 Senator Elizabeth Warren of Massachusetts could appeal to progressives within the party, but her age (70) is considered a disadvantage

And she could help turn Georgia into a genuine swing state.

But the highest post she’s ever held is minority leader in the Georgia House of Representatives, a possible vulnerability in a time of crisis.

Selecting a running mate is always critical for a presidential candidate. But it’s an especially urgent calculation for the 77-year-old Biden, who, if he wins, would be the oldest American president in history.

The decision carries added weight amid the coronavirus pandemic, which, beyond its death toll, threatens to devastate the world economy and define a prospective Biden administration.

‘We’re still going to be in crisis or recovery, and you want a vice president who can manage that,’ said Karen Finney, a Democratic strategist who worked for Hillary Clinton’s 2016 campaign.

But she pointed to Biden’s role in the Obama administration’s 2009-10 recovery efforts as evidence that a crisis makes the choice of a running mate an even ‘more important decision than usual.’

He must consider the demands of his racially, ethnically and ideologically diverse party, especially the black women who propelled his nomination.

He must balance those concerns with his stated desire for a ‘simpatico’ partner who is ‘ready to be president on a moment’s notice.’

Democrats close to several presumed contenders say they’ve not yet been contacted.

Biden has offered plenty of hints.

He’s said he can easily name 12 to 15 women who meet his criteria, but would likely seriously consider anywhere from six to 11 candidates. 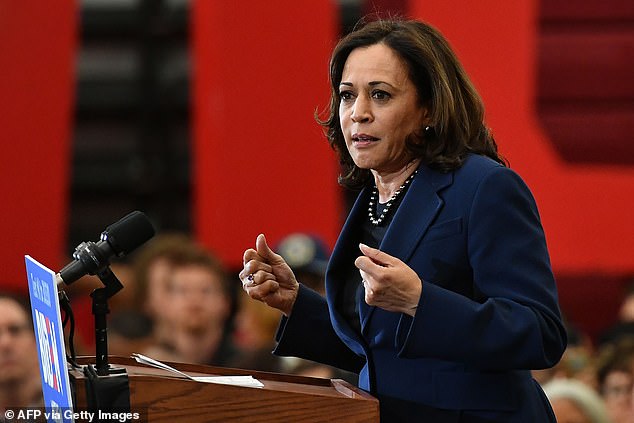 He’s given no indication of whether he´ll look to the Senate, where he spent six terms, to governors or elsewhere.

‘The best thing you can do for all segments of the population is to win,’ said Biden´s campaign co-chairman Cedric Richmond, a Louisiana congressman and former Congressional Black Caucus chairman.

‘He has shown a commitment to diversity from the beginning. But this has to be based on, like the VP says, who he trusts.’

Paul Maslin, a Democratic pollster based in the battleground state of Wisconsin, said it will be impossible for Biden to please everyone.

‘You can ask too much of a vice president pick to bridge everything – ideology, generational gap, gender, race, experience,’ he said.

‘There’s going to be something wrong with every one of these choices.’

And Rep. Val Demings, a black congresswoman from the swing state of Florida, helped lead the House impeachment efforts against Trump.

Yet all four women are relative unknowns nationally.

Black voters ‘have to trust the messenger,’ said Adrianne Shropshire, executive director of Black PAC, and ‘a black woman could stand up and have moral authority to lead on those big issues facing the country right now.’

But she said that doesn’t mean a white, Asian or Latina vice presidential nominee couldn’t ‘speak to the systemic issues, the structural issues that allow for inequalities to persist.’

The gifts that might NOT arrive this Christmas, including Barbies

Murder of Scandinavian tourists being treated as a ‘terrorist act,’ more arrests made