Home » World News » An oil boom is bringing wealth to this poor nation, but also tensions

Georgetown: On a sprawling abandoned sugar estate by the coast of Guyana, the scale of the changes sweeping across the country is immediately visible.

In just a few years, enormous warehouses and office buildings servicing international oil companies have sprung up amid the shrub land, irrigation canals and fields of wild cane.

People are "moving from cutting cane to businessmen," said Mona Harisha, a local shop owner. "It changed so fast." 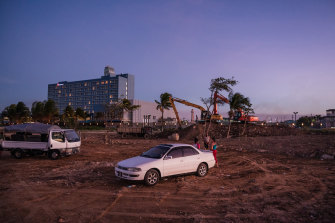 Guyana is giving up its past as an agricultural economy and speeding toward its near-term future as an oil-producing giant. And so Harisha has renovated her general store, redolent of Indian spices, which she runs from a side of her cottage in the Houston neighbourhood of Georgetown, the county's capital.

She said oil companies have brought jobs and better roads, and have raised home values — and brought new business to her shop.

Her daughter is thinking of returning from New York, an example of how the government is enticing a huge diaspora home with promises of the oil bounty. 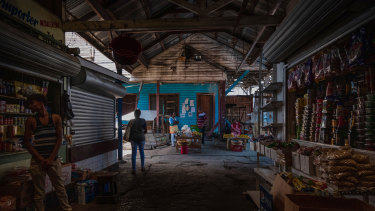 For many, the transformation into an oil economy has brought optimism about greater prosperity. But that optimism is often mixed with a fatalism that nothing will really improve for the vast majority of people in one of South America's poorest countries.

Once home to 3000 sugar workers, the abandoned Houston sugar estate has gradually been absorbed into the suburban sprawl of Georgetown. About 100 families still live in the uniform one-story cottages built by the state sugar company for workers in the 1960s. For them, the recent changes have brought opportunity.

Like most of Houston's residents, Harisha's ancestors came to Guyana as indentured labourers from India in the late 19th century to replace enslaved Africans on the sugar plantations after the British, who then ruled Guyana as a colony, abolished the slave trade. 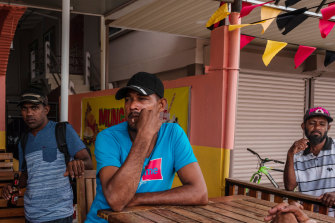 When the labourers' contracts expired, some stayed, becoming the largest ethnic group and helping shape a unique, vibrant culture, which looks outward to the Caribbean rather than to its Latin American neighbours.

While the effects of the giant oil discoveries off Guyana's coast are most obvious in and around Georgetown, they are now beginning to extend a little further beyond the capital, too.

In a brick shack on the edge of the jungle 25 kilometres away, Jason Bobb-Semple, 25, is making his own big bet on oil.

With a $US3000 ($4800) government loan, he built a small poultry farm and bought 4000 chicks to meet what he expects to be a booming food demand in a rapidly developing country.

"After all this oil," Bobb-Semple said, people will want to eat. "These are my hopes." 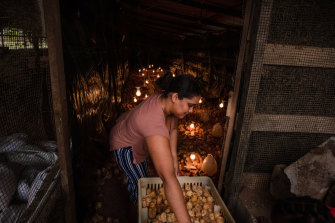 Just hours after Bobb-Semple received the chicks, he got a visit from his first potential investor, a Guyanese emigre businessman who was back home looking for eggs to sell to the offshore oil rigs.

The investor, Lancelot Myers, said oil companies currently have to import most of their provisions, providing a business opportunity to local entrepreneurs who can fill supply gaps. "Now is the time to hit the ground running," he said.

The enterprising energy of the Guyanese seeking to benefit from the oil boom contrasts sharply with the deep depression, both economic and psychological, reining in the rural sugar belt, which had powered this country's economy since the 17th century.

A decision by President David Granger to shut down most of Guyana's unprofitable, state-owned cane processing plants in 2018 left about 7000 sugar workers unemployed, devastating the surrounding regions.

The closures have turned places like Skeldon in the fertile east of the country into ghost towns, wiping out the once-vibrant local markets and businesses that used to serve the sugar workers.

Bands of former cane cutters aimlessly roam Skeldon's streets or pass the time in fast-food shops without eating, despairing of finding another job.

"This country was created out of sugar. I lived my life in that industry," said Ferdinand Guptar, a 59-year-old unemployed cane cutter in Skeldon, who now does household chores for his wife while she cleans the floors at a school for $US200 a month.

"It's depressing when your wife has to take care of you," he said.

According to the latest census, ethnic Indians comprise 40 per cent of Guyana's population of about 750,000, compared with 30 per cent for the Afro-Guyanese. The indigenous communities, about 10 per cent of the population, provide the country's traditional swing vote.

"Sometimes it's not just about profitability, but the quality of people's lives," said David Armogan, governor of Skeldon's region, referring to his opposition to the sugar plant closures. "This is more about vindictiveness than economics." 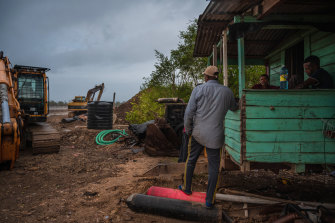 Workers wait for a storm to pass before continuing to repair a breached sea wall in Mahaicony, Guyana.Credit:Adriana Loureiro Fernandez/The New York Times

These ethnic tensions reached a fever pitch during the March 2 elections, whose aftermath has descended into a bitter, inconclusive contest between Granger and the main opposition party backed primarily by ethnic Indians. The outcome remains undecided, and the country is still at a political standoff.

The financial stakes of the political conflict are enormous, as oil revenues are expected to deliver tens of billions of dollars into government coffers in the years ahead. The election was largely a referendum on how Guyana should spend that windfall.

The ruling party advocates using the money to retrain agricultural workers for the public and service sectors. The opposition instead wants to subsidise sugar farms to keep rural communities alive.

The first small-scale oil exports started in January. While the money that the government will see in 2020 is just a fraction of what's coming when output reaches 1.2 million barrels day at the end of this decade, one-third of the state's budget this year still is expected to come from oil revenue.

The International Monetary Fund projected that Guyana's tiny economy would grow by 86 per cent this year, the fastest rate in the world. That forecast, however, is likely to take a major hit from the sudden collapse of oil prices, the coronavirus pandemic and Guyana's ongoing political paralysis.

To Guyana's small but vocal group of environmentalists, the country's polarised politics and ethnic grievances distract from its existential problems as it becomes a major contributor to fossil fuel consumption.

Along the country's densely populated central coast, rising sea levels brought on by climate change are gradually overwhelming a system of dikes first built hundreds of years ago by the Dutch colonialists who preceded the British.

Nine out of 10 people in Guyana live below or near sea level.

Each day for the past five months, a road gang has toiled on a Sisyphean task along the muddy Atlantic Coast, trying to fill a breach in near 100km sea wall with stones and sand. Each week, the tide washes away their efforts.

"It keeps getting worse, until you can't control it," said Joree Shoturem, an ex-farmer in the village of Broom Hall near Georgetown whose rice fields were ruined by the creeping salt water and whose sheep and cows were swept away. "The repairs have had no good result."

Despite the futility, Shoturem has resigned himself to his new government job. With no farm, he has joined the work crew, ceaselessly lobbing piles of dirt into an advancing ocean.

"People don't make the connection between the rising tides and the fossil fuel," said Annette Arjoon, a local businesswoman and environmentalist. "Unless we have a real national conversation, we'll use the oil revenues to build higher sea walls."

How old is Kay Burley and how long has the Celebrity Hunted contestant been on Sky News?