Premier Daniel Andrews has been forced to defend his government’s approach to reporting the state’s public finances after it was savaged by an independent Parliamentary Budget Office.

In a report published on Friday, the office found the Labor government had repeatedly changed or even removed key targets on the state’s debt and deficit as the budget position worsened in the past two years.

The office says the Budget left Victorians in the dark about when the state’s massive debts might be paid off and how much the Andrews’ government’s signature “big build” infrastructure program would cost in the end.

The office also said the Budget papers were produced in a way that was “vague” and made an objective assessment of the government’s performance difficult.

The timing of the report’s publication is awkward for top officials from the Department of Treasury and Finance, which produces the Budget papers each year, who are due to appear before state Parliament’s Public Accounts and Estimates Committee on Monday morning. 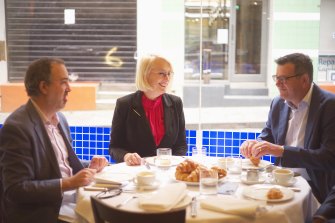 Victoria’s public sector finances were making a tentative recovery, according to the latest data, before the latest lockdown hit, finishing the 2021 financial year with the government’s net debt at $72.7 billion and its budget $14.6 billion in the red, with the government saying it is off to a good start in recovering from the economic shock of the pandemic.

But the Budget Office, which provides independent economic advice to state parliamentarians, says in its report, Fiscal objectives, targets and risks, that recent Victorian budgets “have not presented a transparent and cohesive fiscal framework”.

“Components are spread throughout the budget papers, and are vague, making objective assessment of performance difficult,” the office wrote.

The office said that in the most recent Victorian Budget 2020-2021 – the first to reflect the impacts of the COVID-19 pandemic – that the government had modified or abandoned most of its fiscal targets.

Only one fiscal target remained – for the operating cash surplus – after goals for net operating, a surplus, net debt and infrastructure investments were either stripped out or watered down.

“There are now fewer and less clearly defined fiscal objectives and targets than prior to the pandemic,” the office wrote.

The Premier, questioned at a press conference on Sunday morning about the findings, said the Budget Office was entitled to its views, but that the Victorian Auditor-General was the official oversight authority for the state’s Budget processes.

“Ultimately we take our advice from Treasury and Finance, and we can all be certain of the fact that the auditor-general signs off on our Budget papers every single year,” Mr Andrews said.

More than 250 people have been killed taking a selfie with drowning the most common cause, study finds… and men are twice as likely to die as women