Plans to erect a huge 164ft ferris wheel next to Pompeii have raised fears the attraction could damage the ancient Roman city by attracting too many tourists.

A proposal to build a wheel around 300 yards (274 meters) from the historically treasured site near Naples has reportedly been lodged with local authorities.

The mayor’s office is looking over an application for the giant tourist attraction next to the preserved city, according to the Times.

But a government minister today said that if any such plan was put before his office it would be turned down.

Alberto Bonisoli, Minister of Culture for the Italian government, said his offices had not received a plan for a wheel, but added it would be rejected if it was put forward.

He tweeted today: ‘Ferris wheel in front of the site of @pompeii_sites? No mention of it at all. 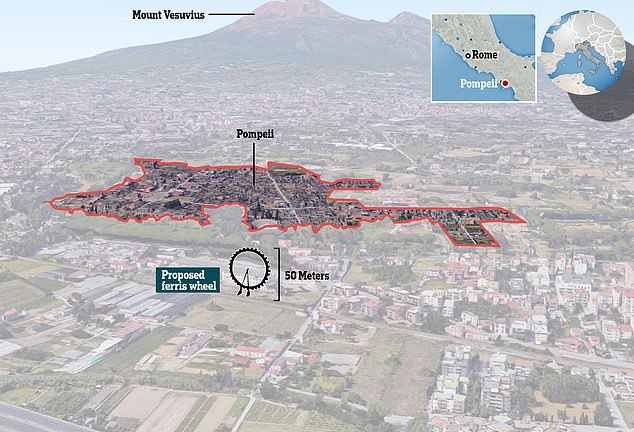 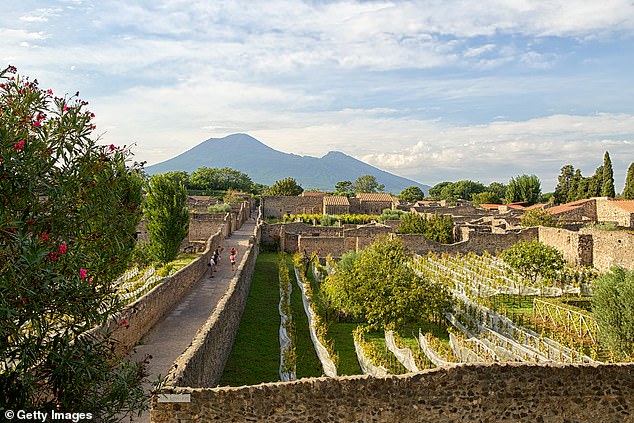 Ancient walls and vineyard near the Garden of the Fugitives in Pompeii with Mt. Vesuvius in the background

‘I have no news that such a project has been presented to our offices, but if it arrives we will send it back to the sender.’

Concerns were also raised by local officials who fear the amusement ride could attract too many of a ‘lower level of visitor’ and damage the beauty of Pompeii.

A spokesman for the city mayor’s office said any proposal to boost the area’s economy would be considered.

He told the Times: ‘We would be happy. Any proposal that can help the economy is positive, but we need to run checks [over] a month before we give planning permission.’

The ancient Roman city was buried, along with neighbouring Herculaneum, by volcanic ash after Mount Vesuvius erupted in AD79, killing more than 2,000 people.

This pyroclastic flow preserved the inhabitants and their surroundings leaving detailed insight into the everyday life of its inhabitants.

Organic remains, including wooden objects and human bodies were entombed in the ash and decayed away, making natural moulds for excavators to make plaster casts. 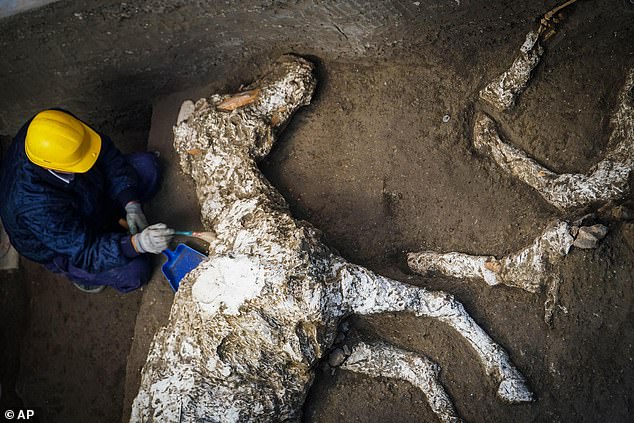 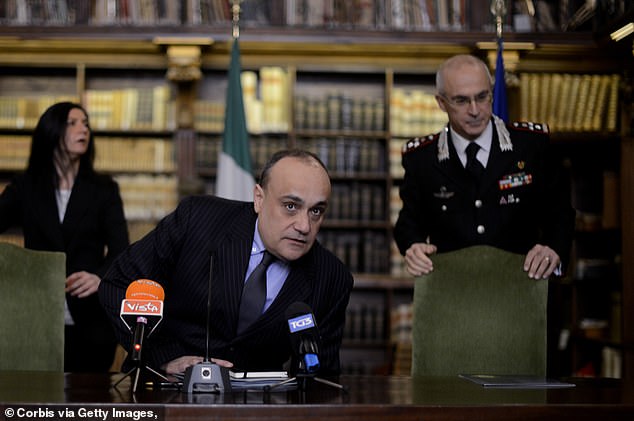 The ruins were discovered in the 16th century and the first excavations of the city began in 1748.

Nearby Herculaneum was properly rediscovered in 1738 by workmen digging for the foundations of a palace for the King of Naples, Charles of Bourbon.

Pompeii is a UNESCO World Heritage Site and is one of the most popular tourist attractions in Italy, with around three million visitors every year.

Archaeological discoveries are still being made in Pompeii and increased tourism is a constant worry for the regional authorities.

Earlier this month well-preserved thermopolias – a kind of fast food counter – were unearthed in the north of the city by archaeologists.

Moves to crackdown on tourism damaging other historical sites have been taken elsewhere in Italy such as in Rome and Venice.

Athlete needed 18 stitches after impaling his scrotum while pole vaulting