Hundreds of anti-vaccine mandate protesters encircled the National Press Club on Tuesday while Prime Minister Scott Morrison made an address inside ahead of next week’s parliamentary sitting week, the first of 2022. 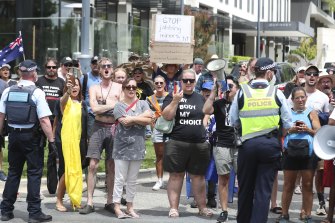 One group carried Trump flags and chanted “no more mandates”, and “Arrest ScoMo” from 11am, yelling at journalists and politicians as they entered the National Press Club.

Although the noise of the protest did not interrupt Mr Morrison as he gave his address, protesters played the speech outside the building and heckled whenever the topic of COVID-19 or vaccination came up.

Upon leaving the Press Club, Deputy Prime Minister Barnaby Joyce attempted to walk through the protest before retreating after the crowd surged, and cries of “you’re killing the children” could be heard.

The protest – coined the “2022 Official Convoy to Canberra Terra Australis” – then made its way back the lawns of Parliament House, protesters chanting “tell the truth” and drumming on the journey. 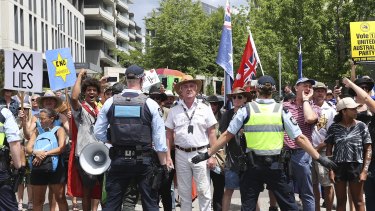 Former Qantas pilot Graham Hood (centre) stands among a crowd of protesters facing off with police on Tuesday.Credit:Alex Ellinghausen

Former Qantas pilot Graham Hood addressed the crowd, claiming he’d been the captain of multiple flights chartering the Prime Minister before losing his job for refusing to be vaccinated against COVID-19.

The convoy includes “Sovereign Citizens”, an anti-vaccine conspiracy group that descended on Canberra in recent months, planning to “take over” Old Parliament House and dissolve the government.

The QAnon-adjacent group incorrectly believe the historic building to be the “true” seat of power in Australia and promotes conspiracy theories of a cover-up of paedophiles within the political class.

In a video posted on social media on Tuesday, conspiracy theorist Christian “Mack” Marchegiani claimed to pass on instructions from Former One Nation senator Rodney Culleton for protesters to flock to the city this weekend.

However, when contacted, Mr Culleton denied any involvement in the protests and said Mr Marchegiani’s message was incorrect.

Mr Culleton’s fledgling Great Australian Party is campaigning against vaccine mandates and lists him as a Senate candidate for Western Australia.

Mr Culleton was sworn in as a senator in 2016 but fell out with One Nation founder Pauline Hanson, quitting to become an independent before a dispute over his financial affairs saw his election challenged in the High Court. 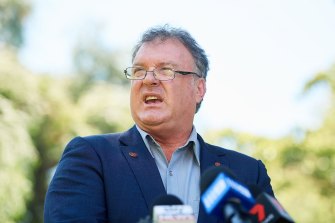 Former One Nation senator Rodney Culleton has denied a protest figure’s assertion he is involved in the Canberra rallies. Credit:Stefan Gosatti

He was declared bankrupt by the Federal Court in December 2016 over a $280,000 debt to a Perth businessman and disqualified from the Senate in a High Court decision early in 2017.

Mr Marchegiani, who protests against what he calls “medical apartheid”. was at the front of the crowd at Parliament House on Monday, holding a megaphone and speaking to police.

US could be under a dictatorship that will spark 'widespread violence' by 2030, expert warns