Cases of lethal superbugs have soared by up to a THIRD in the past five years because of the overuse of antibiotics, Public Health England warns

Bloodstream infections caused by antibiotic-resistant ‘superbugs’ have surged by a third in four years in England because medicines are being over-prescribed.

A Public Health England report has revealed there were 18,200 bloodstream infections involving the three most concerning resistant bacteria last year.

Antibiotic resistance is considered by top scientists to be one of the top health threats to the UK because it allows bacteria to evolve in a way that stops common and formerly effective medications from working.

Bacteria triggering deadly conditions such as sepsis, pneumonia and kidney failure were included in the three strains in the report.

Officials have called on Brits to use antibiotics exactly as instructed by their GPs – and never to self-prescribe them – to halt the spread of resistance in bacteria.

They added that the vital medicines should not be used to treat coughs, ear-ache and sore throats that can get better on their own. 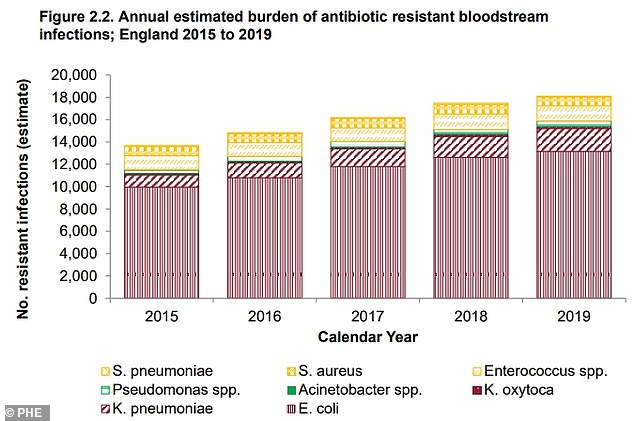 In its annual report on the spread of antibiotic-resistant bacteria in England, PHE officials said the biggest surge in infections was in Klebsiella pneumoniae – a bacteria that can cause the deadly lung condition pneumonia.

WHEN SHOULD YOU TAKE ANTIBIOTICS?

Antibiotics may be used to treat bacterial infections that are unlikely to clear up on their own, may infect others, or pose serious risks.

They are needed most when someone gets sepsis, pneumonia, a urinary tract infections (UTI), sexually transmitted infections like gonorrhoea or meningococcal meningitis.

Antibiotics are frequently being used to treat illnesses such as coughs, earache and sore throats that can get better by themselves.

Taking antibiotics encourages harmful bacteria that live inside you to become resistant. That means that antibiotics may not work when you really need them.

Research in 2017 shows that 38 per cent of people still expect an antibiotic from a doctor when they visit with a cough, flu or a throat, ear, sinus or chest infection, according to PHE.

The highest number of infections was recorded in E.coli – a bacteria best known for food poisoning and which triggers stomach pains, diarrhoea and, in extreme infections, kidney failure.

A bacterium called Enterococcus spp was the third driver behind the rise in bloodstream infections.

PHE officials did not reveal how many people had died from superbug infection, but in the previous report they said almost 3,000 had been killed by them in 2018, up from 2,450 the year before.

Antimicrobial resistance – another term for antibiotic resistance, and often shortened to AMR – kills around 700,000 people a year worldwide and is mainly fuelled by the over-use of antibiotics in healthcare and farming.

Bacteria can become resistant – known as a superbug – when people take incorrect doses of antibiotics, or they are given out unnecessarily.

If the bacteria are exposed to low levels of antibiotics not sufficient to kill them they can learn to adapt to the drugs and produce strains that can survive their effects.

Total resistance means once-treatable infections can no longer be curtailed by the medicine.

Stronger antibiotics must then be used to stop the illness, but there is a risk bacteria will evolve to resist these as they are used more often and there are only limited numbers of drugs available.

The upward trend in resistant infections has re-ignited calls for GPs and Britons to moderate their use of antibiotics to prevent a further spread of the infections.

Isabel Oliver, the director of the National Infection Service at PHE, warned people not to take antibiotics ‘when you don’t need them’, saying this can ‘have grave consequences for you and your family’s health, now and in future’.

‘We want the public to join us in tackling AMR – listen to your GP, pharmacist or nurse’s advice and only take antibiotics when necessary,’ she said.

‘It’s worrying that more infections are becoming resistant to these life-saving medicines.’

Consumption of antibiotics has declined over the last four years, the report said, falling from 19.4 daily doses per 1,000 people in 2015 to 17.9 last year.

Prescriptions by GPs have fallen, the report said, but in hospitals and other community settings it continues to rise.

Officials said this was because bloodstream infections, which must be treated with antibiotics, are on the rise and are generally treated in these settings.

The figures were released for World Antimicrobial Awareness Week, which aims to increase awareness of the resistance crisis and to encourage the proper use of antibiotics among the public, health workers and policy makers.

The report was titled English Surveillance Programme for Antimicrobial Utilisation and Resistance (ESPAUR) and was published today.

WHAT IS ANTIBIOTIC RESISTANCE?

Antibiotics have been doled out unnecessarily by GPs and hospital staff for decades, fueling once harmless bacteria to become superbugs.

The World Health Organization has previously warned if nothing is done the world was headed for a ‘post-antibiotic’ era.

It claimed common infections, such as chlamydia, will become killers without immediate answers to the growing crisis.

Bacteria can become drug resistant when people take incorrect doses of antibiotics, or they are given out unnecessarily.

Chief medical officer Dame Sally Davies claimed in 2016 that the threat of antibiotic resistance is as severe as terrorism.

Figures estimate that superbugs will kill ten million people each year by 2050, with patients succumbing to once harmless bugs.

Around 700,000 people already die yearly due to drug-resistant infections including tuberculosis (TB), HIV and malaria across the world.

Concerns have repeatedly been raised that medicine will be taken back to the ‘dark ages’ if antibiotics are rendered ineffective in the coming years.

In addition to existing drugs becoming less effective, there have only been one or two new antibiotics developed in the last 30 years.

In September, the World Health Organisation warned antibiotics are ‘running out’ as a report found a ‘serious lack’ of new drugs in the development pipeline.

Without antibiotics, caesarean sections, cancer treatments and hip replacements would also become incredibly ‘risky’, it was said at the time.

Spoilers: Dan in danger tonight as he suffers an allergic reaction in Emmerdale

Joshua Ritchie reveals he has dyslexia as he bravely admits: ‘I’ve never read a book before’ – EXCLUSIVE

‘Shadow of the Colossus’ and the Art of Ma