Northern Ireland’s Justice Minister Naomi Long has condemned an arson attack at the home of a police officer in County Antrim as ‘appalling and cowardly’.

Police said three cars were set alight at the property in Larne in the early hours of Thursday in a ‘reckless attack’.

The fire also caused scorch damage to the house where the officer, his wife and daughter had been asleep at the time. 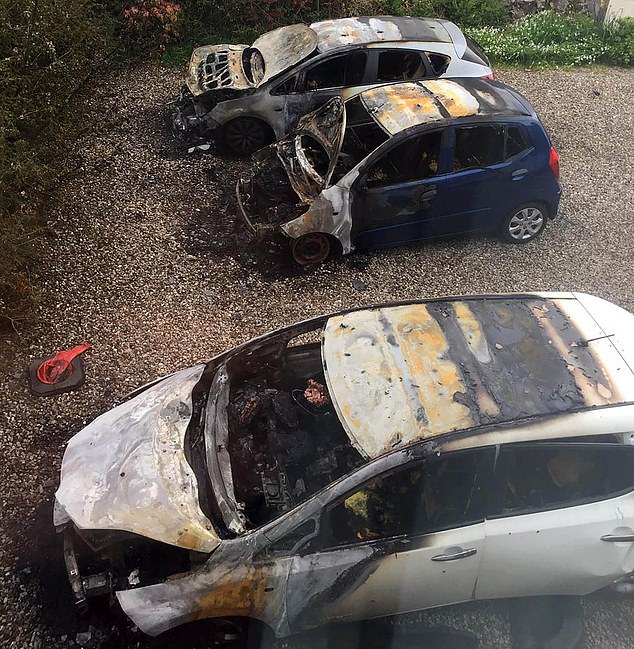 The trio were not injured in what has been described as a ‘terrifying ordeal’ for the family.

Ms Long said she ‘does not underestimate the distress that is caused by an incident of this nature at a family home’.

‘Our police officers put their lives on the line on a daily basis to keep us all safe,’ she said.

She added: ‘My thoughts are with this officer, their family and colleagues.

‘This violence achieves absolutely nothing and needs to stop.

‘I would encourage anyone with information about this intolerable incident to contact PSNI or Crimestoppers on 0800 555 111.’

Sinn Fein MLA Philip McGuigan linked the attack with loyalist anger over post-Brexit arrangements, additional checks at ports which they regard as a border in the Irish Sea.

‘In recent months there has been increasingly violent rhetoric targeting the PSNI and police officers with sinister posters and graffiti appearing in loyalist areas across the north,’ he said.

‘These loyalist paramilitary gangs need to pack up and go away once and for all.’ 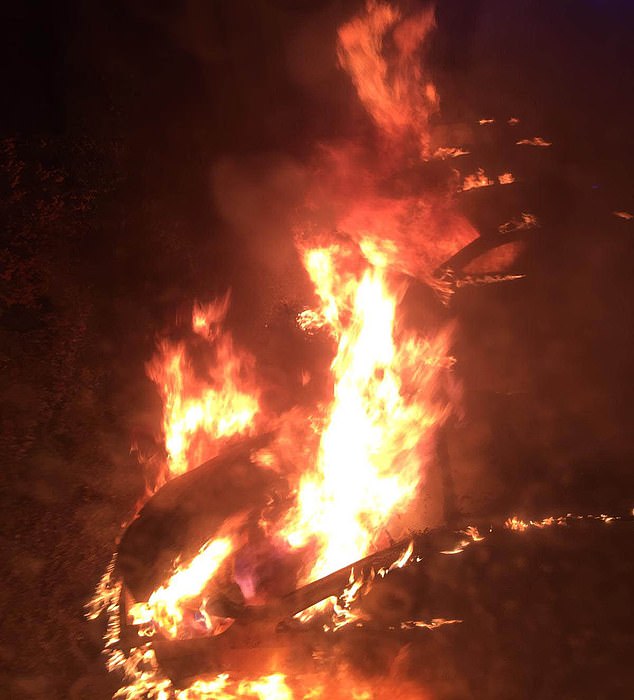 The fire (above) also caused scorch damage to the house where the officer, his wife and daughter had been asleep at the time

Mark Lindsay, chair of the police representative body, the Police Federation, said the incident was a ‘vile act of attempted intimidation’.

‘This was a vile and reprehensible action against an officer who works to protect the community,’ he said.

‘Faceless bullies need to be apprehended, and I would echo the appeal made by the PSNI to the people of Larne to help track down those responsible for the attack.

‘Police officers are as much a part of the community they serve and it is time the community rallied round to end this type of terror.

‘My thoughts are with the officer and his family and they should know that no stone will be left unturned in the investigation that has commenced.’

Ulster Unionist MLA John Stewart said it is ‘sadly not the first time that arsonists have targeted cars at residential properties in the Larne area’.

‘But the fact that the house outside which these vehicles were parked belongs to a serving police officer, makes this a particularly sinister incident,’ he said.

‘I will repeat what I have always said when cars have been burnt out in the past; the gangsters responsible for this have no support in the community and the people of Larne want nothing to do with this type of activity. It is time for the police – and especially the judiciary – to come down hard on whoever is behind this and put these criminals behind bars for a very long time.’

Police said they were ‘keeping an open mind’ in terms of the motivation behind the attack but that a primary line of inquiry was that criminal elements may have been responsible.

Detective Chief Inspector Dunny McCubbin said it was a ‘completely reckless attack which could have had serious consequences’.

‘Thankfully, no injuries have been reported in what was a terrifying ordeal for the officer and his family,’ he said.

‘There are no words to describe those who would set fire to vehicles in the dark of night outside a family home when the occupants were asleep inside.

‘Their actions stand in stark contrast to the officer who everyday serves our community with dignity, respect and courtesy.

‘At the present time we are keeping an open mind as to the motivation behind this attack, however a primary line of enquiry is that criminal elements may be responsible.

‘Detectives have now initiated a full investigation, which I can assure the community will be thorough and robust.

‘I would take this opportunity to appeal for the help of the people of Larne and further afield in identifying those responsible.

‘Were you in the Glenarm Road area late last night or early this morning? Did you see anyone or anything you felt was suspicious? Do you have any information about this incident? No matter how small or insignificant it may seem, please get in touch.’

Coronavirus is wiping 13 YEARS off victims' lives on average