Home » World News » 'Arthur' creator remembers his favorite moments from the PBS cartoon, including a gay wedding and a visit with Mister Rogers 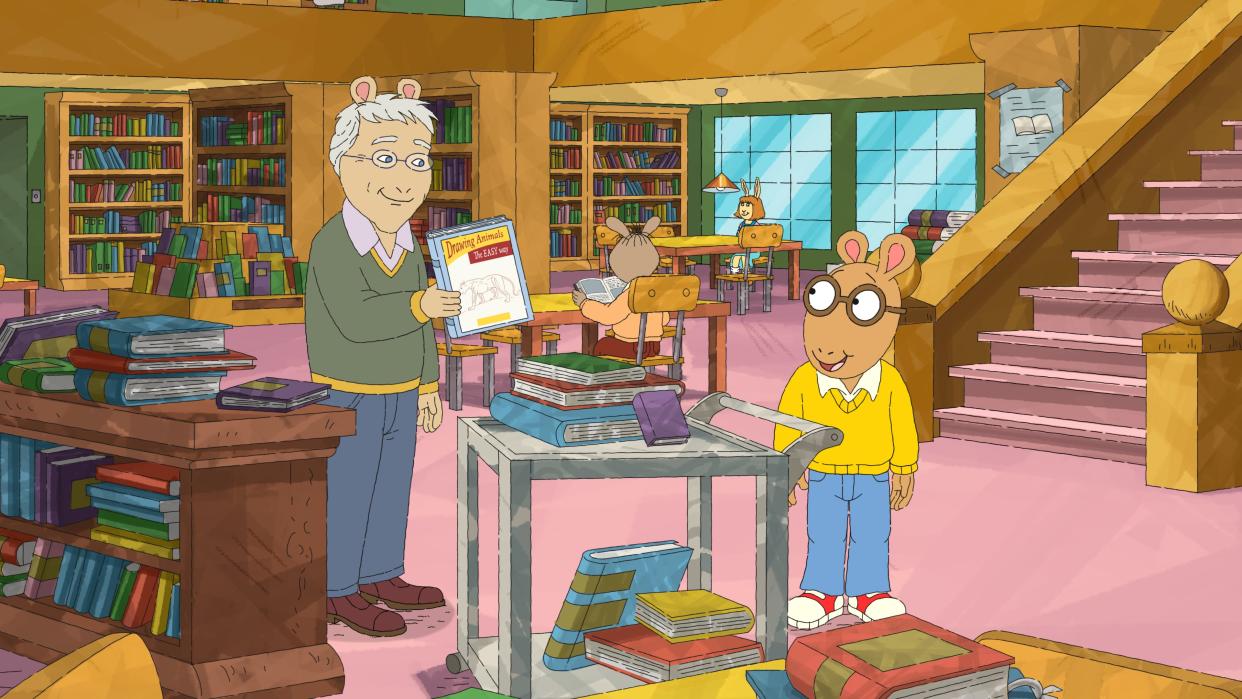 Elwood City's favorite citizen, Arthur Read, has done a lot of growing up — emotionally if not physically — during his 25-year-run as one of PBS's most popular cartoon characters. For his farewell episode, the eternally 8-year-old aardvark is about to visit all-new territory: adulthood. Premiering on Feb. 21, the series finale, "All Grown Up," will flash-forward in time and reveal what Arthur and his pals are up to as working grown-ups.

"I think people are going to be surprised and happy," says Arthur creator Marc Brown, who makes a cameo appearance in the last episode. (PBS will air the final four episodes as the capper to an Arthur marathon that kicks off on Feb. 16.) "I can't object to any of the proposed directions for these characters."

Of course, Brown has been part of Arthur's life for a lot longer than 25 years. The author created his signature character 46 years ago in the best-selling 1976 children's book Arthur's Nose. That slim volume launched a cross-media franchise that has raised multiple generations of kids. And even though the Arthur animated series is wrapping up, the character isn't going anywhere. Brown teases future plans that include a podcast, special PBS public service announcements and even a potential feature film. "Arthur will continue to have new adventures," Brown promises. "As technology changes, Arthur's right there with it."

As one chapter of Arthur's story ends, Brown looks back at significant moments from the meme-generating PBS series, including collaborating with legendary children's entertainer Fred Rogers and diversifying Elwood City's population.

The punch heard 'round the internet 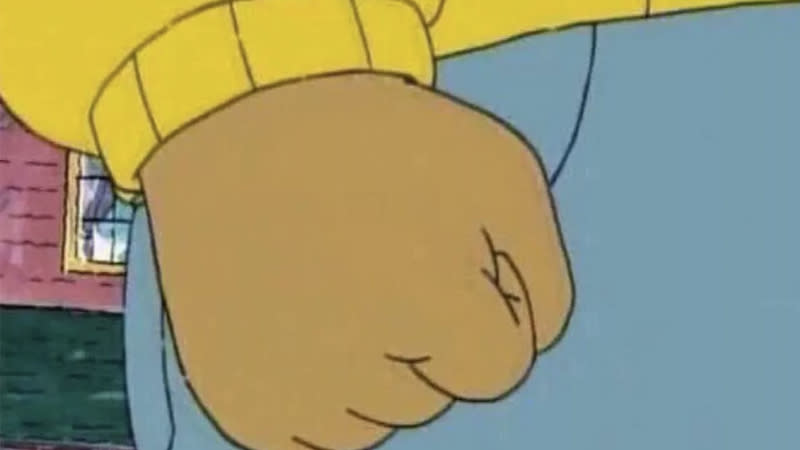 Even if you've never seen an episode of Arthur, you've definitely seen the meme. This close-up image of Arthur's clenched fist from the Season 4 episode "Arthur's Big Hit" has been making the internet rounds since it first aired in 1999. And while he'd never describe himself as "extremely online," Brown is tickled by Arthur's status as meme royalty. "It's been really fun to see these young adults who grew up with Arthur use these symbols and references in their daily life as adults. I think it's terrific."

Interestingly, "Arthur's Big Hit" also happens to be one of the more divisive episodes in the show's history, with fans criticizing Arthur for raising his fist against little sister, D.W., after she toys with his model airplane. But Brown prefers to view it a character-building moment. "Arthur is good, but he's not perfect," the author explains. "He makes mistakes, but he relies on his family and his friends to help him out. I think I've learned about Arthur over these years is that he has a good heart, and that's what makes him so relatable."

All in the family 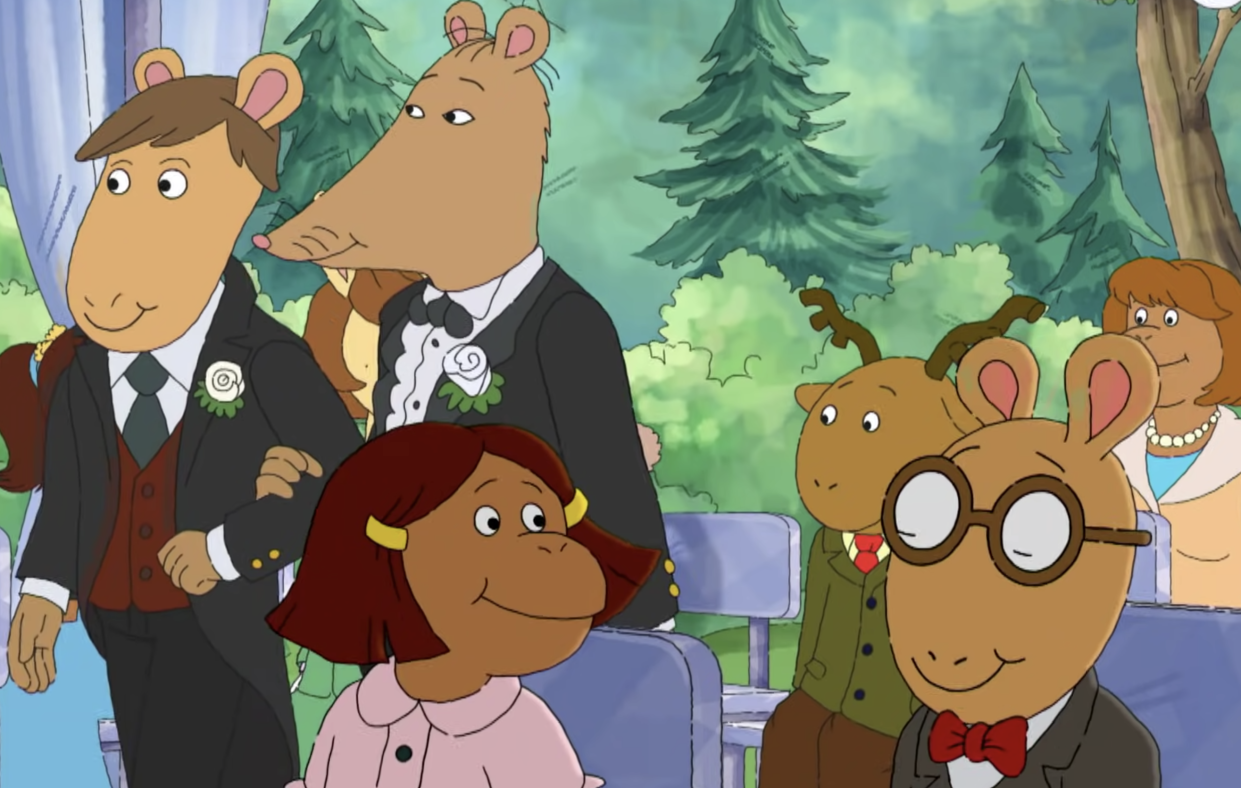 Elwood City has always been one of the most inclusive cartoon communities on television. But the town's diversity has sometimes threatened to drag Arthur and his friends into the dreaded real world "culture wars." For example, a 2005 episode of the spin-off series Postcards From Busterraised hackles amongst conservatives for featuring a family with two mothers. PBS ended up pulling the episode from the airwaves over Brown's objections.

"You would've thought we exploded the earth," he says now. "It was so hard to talk to that family and explain to them why we weren't going to air this episode because we had a lot of pushback."

Fourteen years later, Brown and PBS stood firm when conservative groups once again targetedArthur for the Season 22 story, "Mr. Ratburn and the Special Someone." That 2019 episode featured a same-sex wedding between Arthur's teacher, Mr. Ratburn, and his boyfriend. While some PBS stations banned it from their airwaves, Brown was thrilled that it played in most major markets. "It was a really satisfying way to mark the change and the progress that we've made in accepting others," he says. "We're all in this together, folks."

In general, Brown says he avoids getting bogged down by those who might try to make Arthur a flashpoint in their larger culture war. "I never read the reviews," he says, diplomatically. "We have a vision and a mission, and we want to take it as far as we can. That's the way we've operated with Arthur. Kudos to PBS for letting us tell Mr. Ratburn's story and not putting up roadblocks. I felt so proud of them and excited that we could do what we wanted to do, and do it in a way that felt natural for a third grade audience." 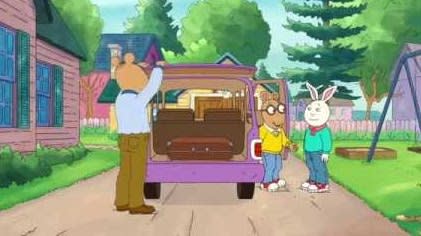 It's rare for a popular show to shake up its supporting cast early on in its run. But Arthur stepped up and took that risk by saying goodbye to Arthur's pal, Buster, the Season 2 episode, "Arthur's Faraway Friend," which sent the rabbit off on an extended trip with his dad. "It was an opportunity to reflect real life," Brown says of why he and the show's writers decided to split the best friends up. "Kids lose friends, or have to say goodbye to them now and then. It was an opportunity for a teaching moment about what that feels like."

And once Buster was gone, he stayed gone — minus the occasional cameo appearance — until the start of the show's third season. For Brown, that storyline was an early example about the differences between telling a story on television versus in the pages of books. "I was terrified when I moved from books to television because I didn't really have any experience in TV," he admits. "What I learned pretty fast is that in a picture book, you've got to freeze frame what you're seeing. With television, you can watch these characters do a lot more, and you can squeeze a lot more emotion and meaning out of all of their scenes." 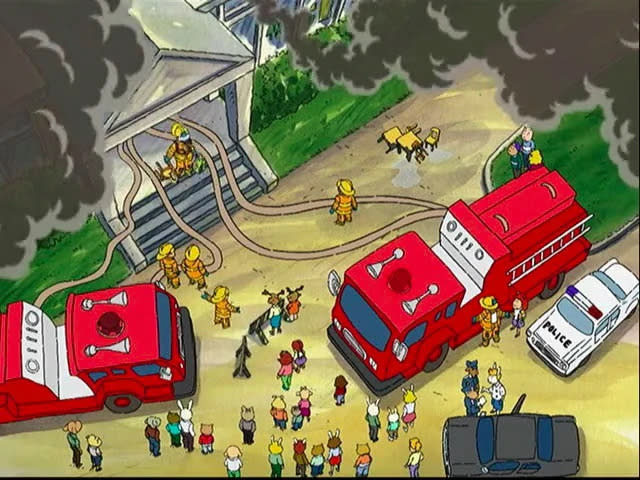 In the aftermath of the Sept. 11, 2001 attacks, television shows across all genres and mediums tried to figure out how to address the tragedy for their respective audiences. In the case of Arthur, the writers drew on 9/11 in the Season 7 episode, "April 9th," which premiered in November 2002. "It was another way to talk with kids about something scary that happens and dealing with that," Brown says of the two-part episode, which depicts Arthur's class having to evacuate Lakewood Elementary after a fire breaks out. No one perishes in their escape, but the aftermath of the fire leaves the kids sad, scared and angry in various ways.

"One of the things that's on my mind a lot every day is the safety for kids in schools — because things have gotten quite scary," Brown says. "The writers and I thought, 'What kind of an incident can we have that will be scary, but not too scary,' and a fire seemed right, so that's what we used to craft the story around." The writers also brought in experts to provide insight into how to address such a weighty subject in terms the show's young viewers could understand.

"We always had terrific experts," he says. "In fact, that's how we got Matt Damon to be one of our guest stars! His mom, Nancy Carlsson-Paige, is a professor of early childhood education at Lesley University and was one of our experts. Poor Matt didn't know what hit him." 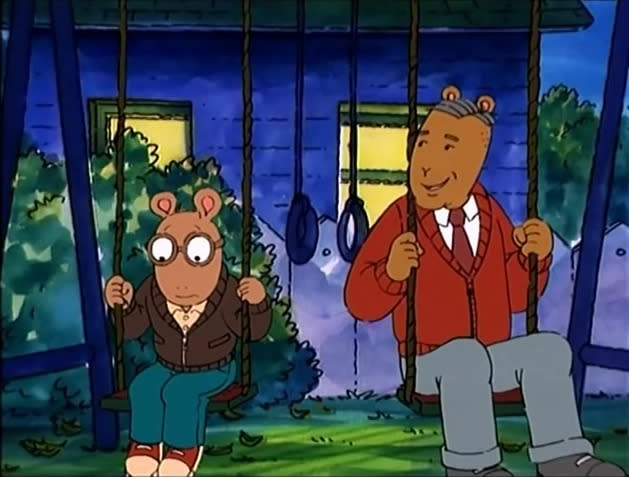 Arthur has welcomed a number of celebrities to Elwood City over the past quarter century, including the Backstreet Boys and the aforementioned Matt Damon. But no guest star shone brighter than PBS legend, Fred Rogers, who lent his image and voice to the Season 2 premiere, "Arthur Meets Mister Rogers."

"He understood television, and he knew what we wanted," Brown says of the episode, which found the third-grader being reluctant to tell his friends about his famous house guest out of fear that they'd make fun of him for loving a show aimed at preschoolers. "We wanted to talk about embarrassment for kids, what it felt like and reassuring someone who needs to stand up for themselves. "Arthur needed to stand up to his friends and not be afraid that he likes something that they may not like."

Brown isn't at all embarrassed to rank his time with Mister Rogers as one of the highlights of his life. The author flew to the host's home base in Pittsburgh for their first meeting, and had a bumpy ride that included a traffic jam and a missed flight. By the time he arrived at Rogers's office door, he was in quite the frazzled state. "I opened the door and there he is, sitting on his sofa in what looked like a suburban den with shag carpeting and awards plastering the walls," he remembers now. "The first thing he said to me was, 'Oh, Marc, I've been waiting for you.' And all the tension of the day just melted away like that."

On his way out, Brown left behind a little memento in the form of a stuffed Arthur doll. "I'm walking away down the hall, and I hear this little voice, saying 'Marc, Marc.' I turn around, and Fred has opened the door just enough to get Arthur's head out there. He's using him like a puppet, and he says, 'Don't worry about me. I'll be just fine.' That was Fred. He was the real deal."