Labor MP Anthony Byrne delivered the rebuke during a 25-minute meeting on Thursday in Canberra between Mr Raab and some members of the intelligence committee, underlining tensions between the UK and its allies over Huawei. Australian and US officials are frustrated Britain said in late January that it would not ban equipment made by Huawei from being used in its new high-speed 5G network. 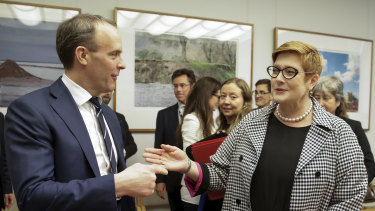 Three sources present at the meeting – which was attended by deputy chair Mr Byrne, Intelligence Committee Chairman Andrew Hastie and Foreign Affairs Committee Chair David Fawcett – said Mr Raab was told directly the Australians were very disappointed by the decision. The sources spoke on the condition of anonymity because the meeting was confidential.

"How would you feel if the Russians laid down infrastructure in your own networks? That's how we feel about Huawei," Mr Byrne told Raab, according to sources in the room. Mr Byrne became frustrated when Mr Raab said the decision to approve Huawei was "difficult" but "technical" and "not political."

Mr Byrne, who has a long-standing relationship with Australia's intelligence agencies, responded by telling Mr Raab that British spies were "flat-out wrong" to say Huawei can supply 5G equipment and not pose a threat to national security, according to the sources. Mr Byrne added that this determination went against the assessments of Australian and US agencies.

"He basically said: 'I'll raise you my ASD [Australian Signals Directorate] against your GCHQ [Government Communications Headquarters]'," a source in the room said.

Byrne described the issue of China as an "existential" one for Australia, according to a source. He argued Australia had never before been in the position where its largest trading partner was also its biggest "security threat".

The Trump administration has lobbied its “five eyes” intelligence-sharing allies – which includes Britain, Australia, Canada and New Zealand – to rebuff Huawei, arguing the telco works closely with Beijing. However, sources said Mr Raab implied Washington accepted the UK deal because the "technicalities" had been tested with the United States.

This claim was criticised by Australians who believed the Americans are furious with the decision but are maintaining a friendly response for strategic purposes. The Financial Times reported on Thursday that President Donald Trump was "apoplectic" with "fury" over the decision during a phone call with British Prime Minister Boris Johnson.

The US has not ruled out cutting Britain off from intelligence gathered and shared among the Fives Eyes group.

Both Mr Trump and Prime Minister Scott Morrison have not publicly commented on the UK's decision but Huawei has pounced on the British ruling saying it shows former prime minister Malcolm Turnbull was wrong to ban the Chinese vendor over spying fears.

In the Canberra meeting, Mr Byrne likened the US response to when Australia leased the Port of Darwin to China for 99 years. The backbencher recalled a trip that he made as deputy chair of the Intelligence Committee to the United States in 2016, where the Americans made their frustration clear, according to sources in the room.

China lists the acquisition as part of President Xi Jinping's Belt and Road initiative aimed at building a Chinese-owned modern Silk Road, which the West fears could be used to block and control trade routes.  The Australian government subsequently tightened its foreign investment rules.

Mr Byrne declined to comment when contacted as did the Foreign Office. Mr Byrne did point to the meeting on Twitter saying it was "great" to meet the British foreign secretary.

"We had a full and frank discussion regarding 5G, trade and strategic challenges," he said on Twitter.

The veteran Labor MP has served on the intelligence committee for 13 years. He was not originally meant to meet Raab, who had scheduled an appointment with MPs sitting on the foreign affairs committee instead. But when that plan fell through, last-minute arrangements were made for him to meet the Intelligence and Security Committee's chairs along with Mr Fawcett.

Mr Raab was accompanied by Vicki Treadell, the UK's high commissioner to Australia as well as a string of officials. Mr Raab is in Australia on his first visit abroad since Brexit, in what he says is a demonstration of Mr Johnson's Global Britain policy.

How long is Jamie Tate staying on Emmerdale?