London: Wal Storer and his wife moved to France about 40 years ago after holidaying in Cannes for a year.

Originally from Mittagong, in the NSW Southern Highlands, the 89-year-old Australian thought that he’d always be entitled to his pension, just like the now-octogenarians he grew up with and worked alongside. 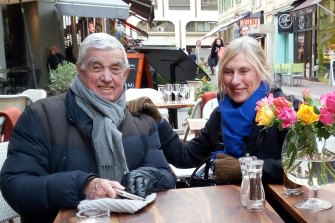 Wal Storer and his wife Christel in Cannes.

But 13 years ago he was shocked to discover that the reality was different and only because of where he was living in retirement.

“I thought I’d see if I could get my Australian pension because I worked in Australia for more than 20 years,” he told The Sydney Morning Herald and The Age via a telephone interview from his home outside Cannes in the south of France.

“I found that nearly every country in Europe has got a social security agreement with Australia.

“What that means is that to apply for a pension you have to be in Australia or in one of the other countries where we have a social security agreement.

“I don’t think it’s fair. We just get by, we have no choice really. We can’t go back to Australia.”

Australia has 31 social security agreements with foreign governments, including Austria, Croatia, Cyprus, Estonia, Denmark, the US, Switzerland, Slovakia, Slovenia and Latvia. The UK pulled its agreement in 2001.

The Department of Social Services says that under these arrangements, each country usually pays a part-pension to a person who has lived in both countries, although it is not uncommon for the agreement to enable a retiree to access the full Australian pension.

Attempts to reach a deal between France and Australia have repeatedly failed.

France has long been an outlier for reasons unknown, with some speculating the decades-long grudge over nuclear testing has contributed to poor diplomatic relations.

But Storer says the recent prime ministerial visits by Scott Morrison and before him Malcolm Turnbull for meetings with French President Emmanuel Macron at the Élysée Palace – plus the $80 billion being spent on submarines with France’s Naval Group – shows this can no longer be an excuse.

“The others didn’t bother,” Storer said. “I’ve had extreme politeness from the French, all my letters were replied to and they said it wasn’t really in their court, but if the Australian government was to request the starting of a social service agreement with them, they’d be prepared to consider it.”

Storer said there appeared to be a cultural unwillingness from politicians and bureaucrats in Canberra to “get off their bottoms” and resolve issues for Australians, particularly if they lived abroad.

“I think the citizens of Australia are treated lamentably by their politicians,” he said. “That doesn’t depend on the political colour of them, either.”

In 2018, official figures put the size of the Australian population in France at about 4000 although the Australian embassy estimated it to be slightly higher, at about 5000.

Peter O’Shea, spokesman for Australian Pensions in France – a group of Australians running a campaign for the two governments to strike a pensions deal – says the COVID-19 pandemic has made the lack of any arrangement more pressing.

“This is a really serious issue,” he said.

“It just raises the stakes in this, it’s just not a viable option to go to Australia.

“Many people are left high and dry here with some in dreadful situations, requiring cancer treatment, using up all their savings and superannuation.

“The xenophobes would say ‘that’s their own fault, they moved over there in the first place,’ but no one foresaw a once-in-a-100-year pandemic coming along.

“This attitude is rather hypocritical given Australians have always loved to travel, and of course it is manifested in current government policy [on closed borders].”

Storer says he doesn’t hold out hope for seeing a dollar of his pension in his lifetime.

“I’m 89 – the chance of getting it done before I kick the bucket isn’t really terribly great,” he says, laughing.

“It’d be nice to get it, just to get it started, I think I’d be happy if the decision was made just to open negotiations, I think I would have achieved something in this area.”