Home » World News » Australia’s cricketers are back in Sri Lanka. But how did the island nation break down?

How bad is the crisis in Sri Lanka? And what lies ahead?

I the heart of Colombo, the Galle Face Green is full of activity, from morning joggers and children playing cricket to locals and tourists surveying food stalls. Lately, however, the oceanside park and promenade in Sri Lanka’s commercial capital has been occupied by another group – anti-government protesters – as Sri Lanka has slumped to its worst financial crisis since independence from Britain in 1948.

Shortages of food, cooking gas, fuel and lifesaving medicine have left many struggling amid social unrest and violence.

Now, as the south Asian country has hit rock bottom, the Australian cricket team has arrived for a Test and limited-overs series. It is the first time they have toured the island nation in six years, during which Sri Lanka has endured terrorist attacks, the COVID-19 pandemic and now an unprecedented economic disaster.

What kind of country will our cricketers be visiting? How bad is the crisis in Sri Lanka? And what lies ahead for the island nation? 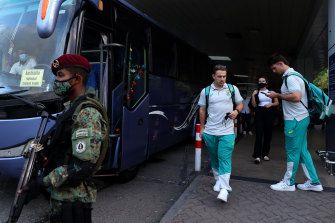 How has the crisis in Sri Lanka unfolded?

The former British colony, off the south coast of India, has an ethnically and religiously diverse population of more than 21 million. Three-quarters are Sinhalese, who are mainly Buddhist, and 15 per cent are Tamils, most of whom are Hindu, while there are small minorities of Christians and Muslims. Divisions between racial groups have been an unfortunate feature of Sri Lanka’s history.

A 26-year civil war raged between the Sri Lankan military and Tamil separatists until 2009, and the country has suffered through several tragic events this century including the Boxing Day Tsunami of 2004, which left more than 30,000 dead, and the Easter Sunday bombings of 2019.

Its latest predicament has triggered calls for the resignation of President Gotabaya Rajapaksa, whose brother, Mahinda Rajapaksa (himself a former president) has resigned as prime minister and fled to Trincomalee naval base. Gotabaya has refused to stand down. Instead, as a curfew was imposed during violent protests in May and police were ordered to shoot looters on sight, Gotabaya appointed Ranil Wickremesinghe – a five-time former prime minister – to replace his brother.

Soon after being named prime minister again, Wickremesinghe announced that the country was down to its last day of petrol, with not even enough money to pay for any of the three ships anchored off the coast with supplies of crude oil. 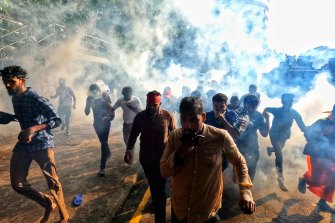 Students run from water cannons and tear gas during protests near President Gotabaya Rajapaksa’s official residence in Colombo on May 19.Credit:Getty Images

Sri Lanka’s economy has been struggling for two years but in 2022 it has been in freefall. Classified as an upper-middle-income country as recently as 2019, when its foreign exchange reserves sat at $7.6 billion, it was effectively broke by April, with just $1.6 billion left. That nosedive led the country to default on its debts for the first time, suspending repayments of $7 billion due this year on the $51 billion it owes abroad. “Our position is very clear: until there is a debt restructure, we cannot repay,” said Sri Lanka’s central bank governor Nandalal Weerasinghe. The Sri Lankan rupee has plummeted in value and year-on-year inflation has risen beyond 40 per cent.

Later in May, shipments of gasoline started to land, thanks to a $130-million lifeline from the World Bank, oil from Russia and a credit line from neighbour India, which has provided more than $3.5 billion in loans since the crisis began. India and Japan sent aid packages including rice, milk powder and medicine. People were asked to work from home in an effort not to chew through what fuel remained but some drivers still had to line up at petrol stations for more than 24 hours – a situation that’s particularly debilitating for Sri Lanka’s 1.2 million tuk-tuk drivers.

There have been other consequences, too. In late May, a baby died in Haldummulla, in central Sri Lanka, after falling ill at home, her parents unable to find petrol quickly enough to rush her to hospital.

The new prime minister Wickremesinghe, whose government has raised taxes in an effort to generate revenue, has been tasked with negotiating a bailout with the International Monetary Fund. But he warned Sri Lankans this period would be the most “difficult ones of our lives”. 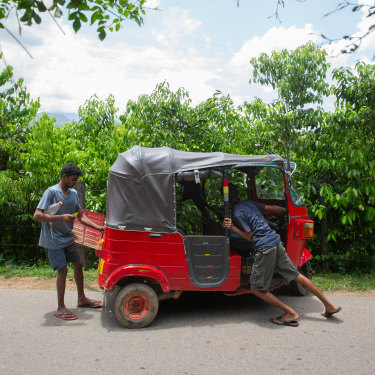 Young men push a stalled tuk-tuk on a road through a cinnamon plantation in Kuruwita. Credit:Getty Images

How did Sri Lanka go broke?

The stripping away of tourism during the pandemic has been blamed for some of the economic woes. Add to this the war in Ukraine, which has affected supply chains worldwide and driven up prices of key commodities such as oil and wheat. But analysts point to major blunders by the Rajapaksa regime as being chiefly responsible for the island’s predicament.

“It was already a stupid response to the currency crisis because, in fact, it caused greater problems.”

Sweeping tax cuts in 2019 slashed more than 25 per cent of government revenue. “That’s pretty radical. Ronald Reagan didn’t have tax cuts like that,” says Alan Keenan, the Sri Lanka project director for the International Crisis Group. “That’s a really huge bite out of the government’s budget.”

A sudden ban on chemical fertilisers in April 2021, sold as an ambitious transition to organic farming, saw a spiralling decline in output of rice and exports of tea, for which Sri Lanka is famous. By the time the ban was lifted in November, farmers were reeling.

“It was designed to save money to not pay for the fertiliser, which is bought from overseas with hard currency that Sri Lanka, already more than a year ago, was facing shortages of,” says Keenan. “So it was already a stupid response to the currency crisis because, in fact, it caused greater problems which really hit agricultural productivity and actually required them to import even more food than they saved on the fertiliser.”

And the Sri Lankan government’s delay in admitting to the International Monetary Fund that it had a problem has also been fingered as aggravating the crisis.

Embedded corruption is a factor too, says the executive director and founder of the Centre for Policy Alternatives in Colombo, Paikiasothy Saravanamuttu. He says yet another factor is the costly militarisation of the country. The ranks of its armed forces bulged even after the end of the civil wa, expanding in former conflict zones in the north and east. 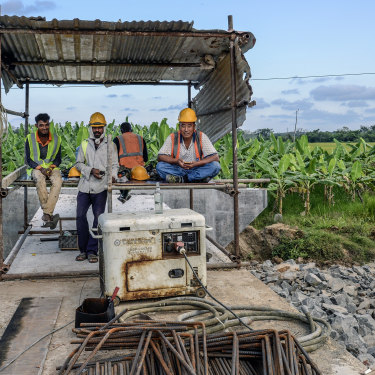 Workers on an expressway developed by a Chinese company in Hambantota in 2018. Mahinda Rajapaksa spearheaded the project.Credit:Bloomberg

What do China and ‘debt traps’ have to do with it?

Sri Lanka’s foreign debt skyrocketed this century, particularly during the presidency of Mahinda Rajapaksa from 2005 to 2015. Sovereign bonds were issued for infrastructure development that, in the main, has delivered little or no economic benefit. The country’s leadership became more deeply entangled with Beijing and its state-owned firms as part of China’s Belt and Road Initiative.

Chinese financing has been behind several major projects such as a barely used new airport in the Rajapaksas’ home turf of Hambantota. In the capital Colombo’s Port City, a 269-hectare area of reclaimed land just off the Galle Face Green is billed as a new financial centre to rival Singapore and Dubai but is still just a construction site.

Most notably, there was the new deep-sea port at Hambantota built by Chinese companies and then handed over to them in 2017 in the form of a 99-year lease when Sri Lanka could not service its loans.

China represents a tenth of Sri Lanka’s foreign debt – the same share the country owes to Japan. But experts believe the burden to be significantly greater when money owed to Beijing’s state-owned companies is taken into account.

“What China has done is facilitate an environment of profligacy with regard to spending and an environment of corruption in terms of commissions,” Saravanamuttu says. “In that respect, I would hold [the loans with] China responsible to a certain extent.”

The Sri Lankan government has maintained that the Chinese military will not be allowed access to the Hambantota port, which would give it an important foothold in the Indian Ocean but would be unacceptable to India.

Yet China’s tentacles have extended beyond the loans that have lumped with Sri Lanka with so much debt. “China has gotten a lot more involved in the politics of Sri Lanka and in backing the government in a much more public way,” Keenan says. “They’ve done so in support of a government which is not as authoritarian as China but which is moving in that direction.” 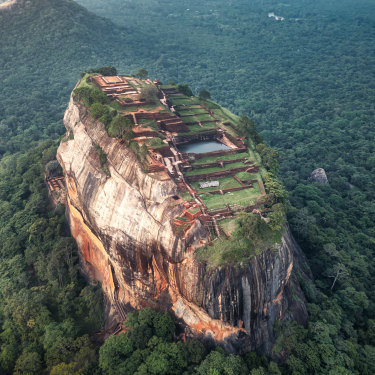 What’s next for Sri Lanka?

From destinations such as the ancient rock fortress of Sigiriya, above, to the Galle Fort, built by the Dutch when they took it over from the Portuguese in the 17th century, to rail journeys through forest and breathtaking beaches, Sri Lanka has undoubtable tourism appeal.

In 2019, before the pandemic, more than 2 million tourists landed at Colombo’s airport, among them 92,674 Australians, according to Sri Lankan government figures. Those numbers made Sri Lanka the 12th most popular country for Australians to visit. It also has rich people-to-people connections with Australia, home to 170,000 people of Sri Lankan heritage.

International arrivals fell below 200,000 last year due to the pandemic but while other countries are starting to get back on their feet, Sri Lanka’s economic crisis is spoiling its hopes of a tourism sector recovery. The Australian government’s Smart Traveller advises Australians to reconsider their need to travel to Sri Lanka “due to the security situation”.

“I know a lot of my friends in Sri Lanka are really worried about a lot of things running out.”

The state of emergency has been lifted but the talks with the International Monetary Fund might take time to reach a tangible outcome. “We are in negotiations with the IMF but it might take about three to six months before we can actually come to an agreement. So, the situation is going to last for some time,” says Saravanamuttu. “Our challenge is to get the bridging finance with regard to tiding us over. But at the same time we also have to do the political reform.”

Faced with speculation that the armed forces might move to overthrow the government, Sri Lanka’s leading defence official has ruled out a military takeover. But the island nation’s future remains unclear.

“I know a lot of my friends in Sri Lanka are really worried about a lot of things running out,” Keenan says.

“If you look around the world over history, people don’t react well to some situations, they don’t remain calm. So, I think there’s a real worry that there could be a chaotic situation when people are faced with even worse daily struggles just to make ends meet.”

Trump impeachment trial to be heard after he leaves office: McConnell

Watch out Sony and Bose! New wireless headphones launch from an unexpected rival