Denpasar:  The Mount Agung volcano on the Indonesian tourist island of Bali erupted on Monday evening, ejecting a 2000-metre-high column of thick ash and hurling lava down its slopes. 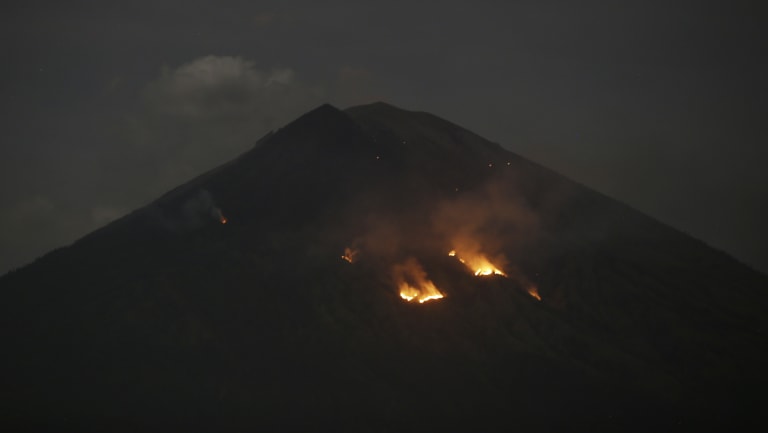 The Indonesian geological agency's Agung monitoring post said explosions from the mountain began just after 9pm local time and lasted more than 7 minutes. "Flares of incandescent lava" reached 2 kilometres from the crater, it said, setting fire to forests at high elevation on the mountain.

It said the alert level for Agung has not been raised and the exclusion zone around the crater remains at 4km.

The National Disaster Mitigation Agency said ash was drifting west and the island's airport, located in the south of Bali, was still operating normally. There have been no reports of injuries.

Last week, Bali's international airport closed for half a day due to volcanic ash from Agung, disrupting travel for tens of thousands.

Monday's eruption was "strombolian", the geological agency said, which is the mildest type of explosive volcanic eruption. It warned people living near rivers to exercise caution, particularly in wet weather, because of the risk of fast- moving flows of muddy volcanic debris.

The volcano, about 70km north-east of Bali's tourist hotspot of Kuta, last had a major eruption in 1963, killing about 1100 people.

It had a dramatic increase in activity last year, forcing the evacuation of tens of thousands of people, but had quietened by early this year. Authorities lowered its alert status from the highest level in February.

Indonesia, an archipelago of more than 250 million people, sits on the Pacific "Ring of Fire" and is prone to earthquakes and volcanic eruptions. Government seismologists monitor more than 120 active volcanoes.

Coronavirus: How developing countries will deal with outbreak a ‘WILD CARD’ – Bill Gates

How Many Kids Do Kevin and Eniko Hart Have?