The regional city of Ballarat is bracing for the arrival of hundreds of ‘freedom’ protesters who have pledged to descend on the town to continue their effort to ‘repeal the bill’.

Between 8000 and 10,000 demonstrators flooded Melbourne’s CBD on Saturday, after the Victorian government’s controversial pandemic bill passed Parliament this week. 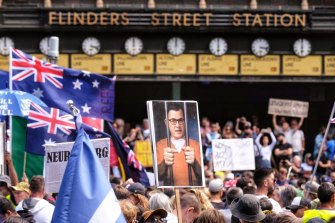 The City of Ballarat on Thursday postponed a series of events which were due to be held to mark the 167th anniversary of the Eureka stockade.

Police have also announced they will deploy a significant number of officers for the duration of the demonstration, while respecting protesters’ right to congregate in the regional city.

“There will be a police presence in the area to ensure there are no breaches of the peace,” a spokesperson said in a statement.

“We understand that any protest activity in Ballarat has potential to cause disruption to businesses in what will be a busy time leading up to Christmas.

“Victoria Police engaged with protest organisers and the City of Ballarat in an effort to ensure that any protest activity causes as little disruption as possible.”

On Saturday, the group gathered in Treasury Gardens before marching through the city to occupy the intersection in front of Flinders Street Station, while another smaller counter-demonstration took place in Carlton with attendees in the hundreds.

Ex-Liberal MP turned United Australia Party candidate Craig Kelly, who has formally tied himself to the movement and is expected to speak on Sunday, addressed at Saturday’s crowd but did not receive the unanimously warm reception he got weeks earlier.

Amid the cheers, some in the crowd booed and called for them not to politicise the movement, while a minor scuffle broke out when a counter-protester lobbed an object at Mr Kelly on stage.

Mr Kelly shared the stage with a host of self-styled “freedom” activists who have become pseudo-celebrities during the pandemic railing against the “tyranny” they claim Victoria lives under.

Later an ugly fracas broke out when hundreds of the protesters made their way to the ABC’s Melbourne headquarters in Southbank to demonstrate.

There have been many anti-lockdown protests in Melbourne over the past 18 months, but the pandemic legislation has galvanised the “freedom” movement over the past six weeks, bringing tens of thousands out for mass weekend protests.

Participants have included Victorians who have lost work due to vaccine mandates or are concerned about state overreach during the pandemic.

But there are also many QAnon conspiracy theorists and in recent weeks several prominent far-right, anti-Semitic figures and members of neo-Nazi organisations.