Victorians are flocking to the water to escape a low-level heatwave which will keep the state sweltering well into next week, before thunderstorms and heavy rainfall arrive on Wednesday.

At Melbourne’s Olympic Park weather station – close to where the world’s best tennis players are sweating it out at Australian Open – the temperature hit 32 degrees at 2pm Saturday. 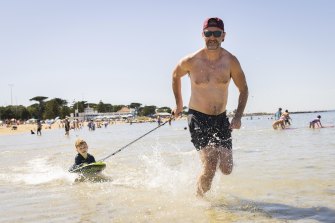 “There are some added dynamics in play… essentially the movement of ex-Tropical Cyclone Tiffany – which is currently over South Australia and causing widespread rainfall – does assist in strengthening those north-easterly winds as well,” he said.

“This is what we’d term a low intensity heatwave. We’re not seeing extreme heat but it is still a sustained period of above-average temperatures, with warm evenings as well.

“Low intensity heatwaves are more likely to affect vulnerable people – those who are elderly, infants or people with previous medical conditions – and cause some discomfort for some people.”

After a long seven days isolating due to a housemate’s positive COVID test, Tom Wharton and Eve Giles from Brunswick said sunshine, fresh air and a famed iced frappé from the Williamtown beach kiosk was just the tonic they needed.

“We decided the best option for us to get out on our first day of freedom was to be at the beach where it’s not close-contact central and we can kind of relax,” Ms Giles said.

“My mum actually lives in Yarraville, so we figured we’d just go back to hers afterwards because of the air-conditioning – a lot of those Brunswick houses don’t have aircon.” 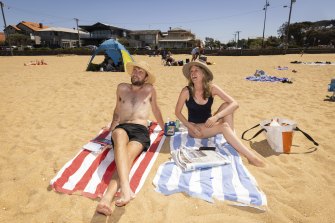 Tom Wharton and Eve Giles enjoying the sun at Williamstown Beach after 7 days of isolation.Credit:Paul Jeffers

For Williamstown couple Ella Zhao and Paolo Palermo Patera, it was a short walk to the slice of beach paradise that had kept them and their two-year-old son, Francesco, afloat through lockdowns.

“My husband’s from Sicily originally, he grew up by the beach, so we always come here when it’s hot, anything over 27 or 28 degrees and we’re right here,” Ms Zhao said.

“Because of COVID and having the little one as well, we probably have been hanging out here a bit more.

“We often say, ‘thank goodness we still have the beach,’ because we’re not that comfortable going other places.” 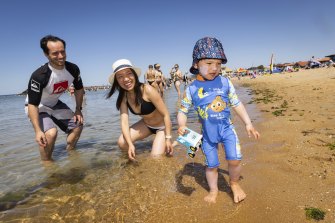 “The heat will last for at least the next five days, but it’s going to be increasingly humid, cloudy and showery as the week goes on,” he said.

“Wednesday, Thursday and Friday look like the days which will get quite wet. We’re expecting widespread showers and thunderstorm activity, potentially severe thunderstorms with heavy rainfall and possible flash flooding.

“Over those three days we could see some significant rainfall totals build.”

Victoria’s Wimmera, south-west and north-central fire regions are predicted to be very high risk on Sunday, but no total fire bans have been called for any part of the state tomorrow.

A guide to the environment, what’s happening to it, what’s being done about it and what it means for the future. Sign up to our fortnightly Environment newsletter here.

‘AJ and the Queen’ Canceled After One Season at Netflix