Beijing: The Chinese government has promised to stage its biggest military parade in modern times on October 1 for the 70th anniversary of Communist China.

Massive political parades were held annually in the 1950s under Mao Zedong to spur loyalty to the party, but their frequency has dropped back to every five years since the end of the Cultural Revolution. 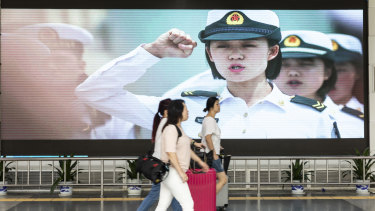 Travellers walk past an advertisement for the People’s Liberation Army (PLA) on a screen near the Luohu border crossing in Shenzhen, China.Credit:Bloomberg

Heralding a season of patriotism and heightened security, the first details of the military parade that will pass by Tiananmen Square for inspection by Party Secretary General and President Xi Jinping were announced on Thursday.

In a nod to modern sensitivities, a twin parade of 100,000 civilians will be held on the same day.

"It is not targeted against any country or region or any situation," said Major General Cai Zhijun, as he outlined the showcase that will include new "battle ready" equipment. It will be the first time the People's Liberation Army parades since it was restructured by Xi, he said.

"Our army is an army of victory and discipline," he told a press briefing in Beijing. 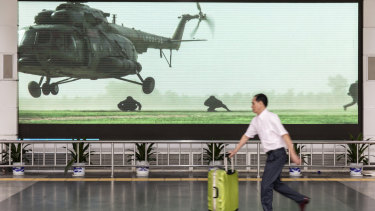 An ad for the People’s Liberation Army (PLA) is seen on a screen near the Luohu border crossing in Shenzhen, China.Credit:Bloomberg

The parade would be "grand, warm, practical and frugal" and demonstrate that "our army will always listen to the command of the Party".

Cai said the parade would be bigger than the 50th or 60th anniversaries. In 2009 nuclear missile carriers and cruise missiles rumbled down Changan Avenue, while the 1999 national day celebration was reported to include 500,000 participants.

The most recent military parade through the capital Beijing involved 12,000 troops four years ago, celebrating victory over Japan in World War II.

Other mass patriotic events on October 1 will include a gala dinner with 60,000 people at Tiananmen Square, and the staging of a new "musical epic" titled Forward Sons and Daughters of China. Celebrations are designed by the Communist Party as a show of strength to a domestic audience.

The musical will include "patriotic artists from Hong Kong, Macau and Taiwan who embrace One Country, Two Systems", a spokesman said, referring to the political system that governs Hong Kong.

As clashes between democracy protesters and police worsen in Hong Kong, and Chief Executive Carrie Lam refuses to make any concessions, there has been speculation that October 1 may also loom as a deadline for her government to solve the city's political crisis before Beijing intervenes.

Tokyo has transparent toilets now – for a good reason

Where Bridgerton Fans Can See Regé-Jean Page Next!