Home » World News » Beneath the gaffes, the Duke ran deep

“The Melbourne Cup?” demanded the Duke of Edinburgh, as if I had released something unpleasant in the palace halls. 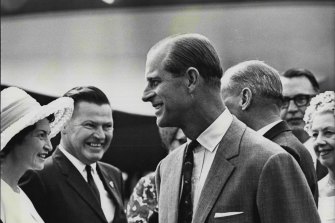 Prince Philip, pictured on tour in Ethiopia in 1965, seemed determined to carve out his own identity.

No one was likely to forget a conversation with the Queen’s consort.

Blunt, often wickedly funny but just as regularly indelicate to the point of causing offence, Prince Philip spent much of his life sending a jolt through the most polite of gatherings.

His one-liners made headlines and inspired long lists of what tend to be labelled “gaffes”, but which were at least culturally insensitive, sometimes plain racist or sexist and regularly uncharitable.

He once upset the Chinese by declaring “if it has four legs and is not a chair, if it has got two wings and it flies but it is not an aeroplane, and if it swims and it is not a submarine, the Cantonese will eat it”. And of Indigenous performers in Cairns in 2002, he inquired “do you still throw spears at each other?” 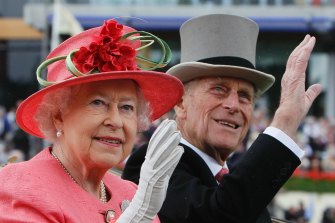 He was also capable, however, of surprising with unexpected insight.

In 1997, I found myself invited to a small reception hosted by The Queen, the Duke of Edinburgh and their only daughter, Anne, the Princess Royal.

Held in the Great Gallery of the Queen’s official residence in Edinburgh, Scotland, the 30 or so chosen guests – journalists attending the Commonwealth Heads of Government Meeting – circulated from one royal to another, anxiously balancing teacups on delicate china.

I’d heard the Queen had sent a horse to Melbourne for the Cup, to be run the following week, and I asked Her Majesty about the steed’s chances, about which she was enthusiastic.

Soon after, having been handed off to the Queen’s consort, I learned the duke was to travel to New Zealand on business related to his international presidency of the World Wildlife Fund (WWF).

Here seemed an opportunity to inquire whether he might incorporate a side trip to the Melbourne Cup.

“The Queen tells us she holds high hopes for her horse,” I ventured.

“Nonsense,” the duke shot back. “The thing has travelled badly and is probably suffering colic. No chance in hell.” 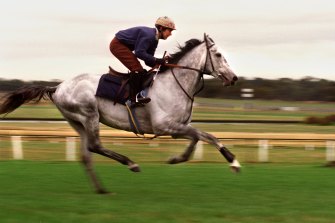 The Queen’s horse Arabian Story was beaten in the Melbourne Cup by Might and Power. Credit:Vince Caligiuri

So he wouldn’t be attending the Cup?

“Nothing but another bloody horse race,” snorted the duke, safely out of earshot of the horse-race loving Queen.

Besides, said Prince Philip, if he were to visit Australia, the authorities wouldn’t be happy with his views.

And with that, he launched into a passionate assault on what he considered the scandal of land clearing, particularly in Queensland.

He reeled off reams of figures about the immense amount of native vegetation that was disappearing across Australia, wiping out wildlife.

He reserved his greatest contempt for Queensland, where the loss of habitat for native animals was, he said, the most appalling in the nation, and among the worst in the world.

I could not take notes, of course, but his lecture in that grand gallery, the portraits of ancient kings of Scotland on the walls, was mesmerising.

It was also well informed. A later study for WWF Australia by eminent scientists found that between 1997 and 1999 about 100 million native mammals, birds and reptiles died annually as a result of land clearing in Queensland. Each year, an estimated 190 million trees were lost to the state.

Though infamously capable of mindless insults, here was clearly a committed, knowledgeable conservationist; a more complicated and engaging man than the lists of “the duke’s gaffes” would suggest.

Oh, and he was right about the Queen’s horse: Arabian Story ran sixth to Might And Power in the Melbourne Cup.

British tourist, 34, drowns while kayaking across a lake in Argentina