Bill Turnbull is ‘having one of those days!’: GMB thrown into chaos after Piers Morgan’s stand-in loses earpiece during break – leaving TV crew scrabbling around on the floor

This is the hilarious moment the Good Morning Britain studios were turned upside down in a bid to find presenter Bill Turnbull’s earpiece.

Bill, 64, is standing in for regular host Piers Morgan this week while he takes a break.

Viewers were delighted to see him return to their screens on Monday after he was diagnosed with prostate cancer in 2017.

But this morning he had ‘one of those Wednesdays’, revealing he had also lost his contact lenses, before joking his false teeth had disappeared ahead of the programme.

To make matters worse, he managed to lose his earpiece during one of the ad breaks, with the whole GMB crew forced to search for it before they came back on air. 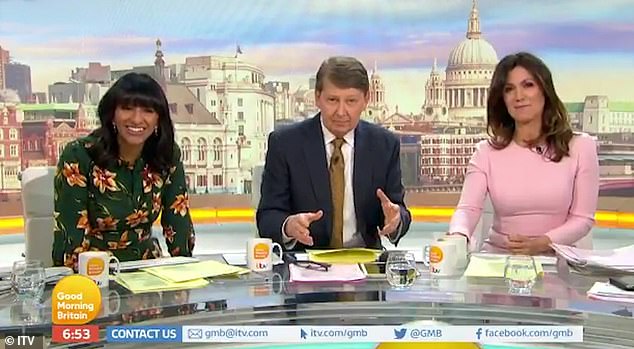 Bill Turnbull, 64, is standing in for regular host Piers Morgan this week while he takes a break. He is pictured centre with co-host Susanna Reid right and Ranvir Singh left

His co-host Susanna, who previously worked with him on the BBC Breakfast show, told the audience: ‘You know they call Wednesday hump day?

‘Bill is really having one of those Wednesdays. You’d forgotten to put your teeth in and you were having trouble reading.’

Bill chimed in: ‘I hadn’t got my contact lenses in, so I was having to wear glasses, then the earpiece popped out during the break.’

The programme then re-played footage from during the advert break – with Benny Hill music as the backdrop – when dozens of crew members were drafted in to help find the earpiece.

Susanna added: ‘If you think we staged this, we absolutely did not. This is what just happened during the break.’

During the clip, Bill joked to one producer: ‘Keep your hands to yourself! Delving into my pockets like that.’ 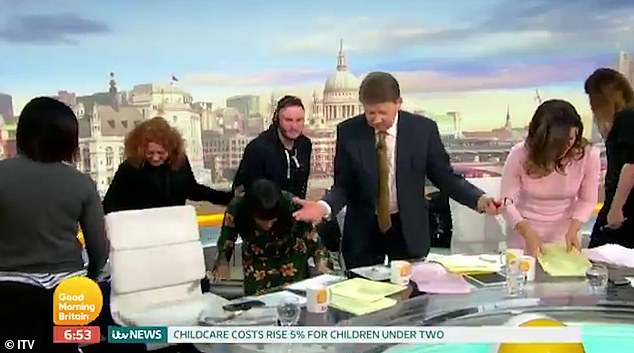 He managed to lose his earpiece during one of the ad breaks, with the whole crew forced to look for it

He then told viewers: ‘People at home, please look around the back of the telly.’

But suddenly an ‘eagle-eyed’ member of the team called Ian came rushing in saying: ‘I’ve just seen it, it’s under your script.’

The small earpiece, the size of a 5p coin, had become lodged between two of Bill’s scripts on his desk.

He asked in amazement: ‘How did it get there?’, before adding: ‘Here, have it back!’ and pretending to throw it to the producer.

Bill and Susanna launched the BBC Breakfast show when it moved to Media City in Salford and worked on it together until 2014 when she left for ITV.

The pair hugged on screen this morning after being reunited after six years.

He said on the programme: ‘I can’t believe this is really happening, it’s so exciting. I feel like I’m coming home.’

Ms Reid made jokes about his full head of hair before others piped up with their own quips.

Viewers commenting on social media were delighted to see the pair back together.

One person tweeted: ‘Bill Turnbull on the sofa with Suzanne… just as it should be. No awkwardness… it’s as if he’s never been away. Welcome back.’

Someone else wrote: ‘How lovely to see Bill Turnbull back on our screens #GMB’ 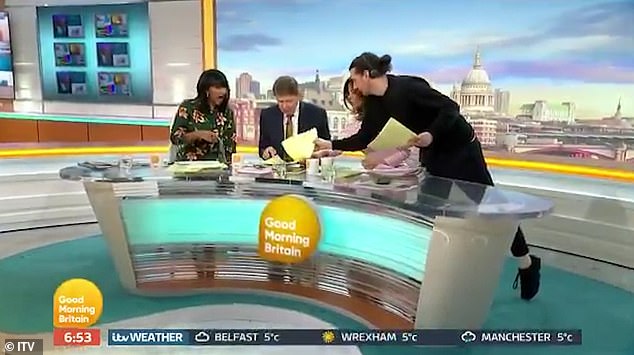 But suddenly an ‘eagle-eyed’ member of the team called Ian came rushing in saying: ‘I’ve just seen it, it’s under your script’