Real-life Yogi Bear! Black bear casually strolls up and steals a picnic cooler from seating area in a Tennessee park

This is the moment a cheeky bear steals a picnic cooler from a seating area as onlookers watch in amusement.

The animal pilfered the cooler from a picnic table close to the Roaring Fork stream located in the Great Smoky Mountains near Gatlinburg, Tennessee.

Footage shows the young black bear walking over to inspect an empty picnic table before knocking a cooler box on to the ground and pushing it away. 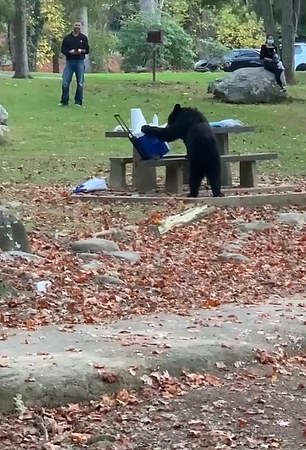 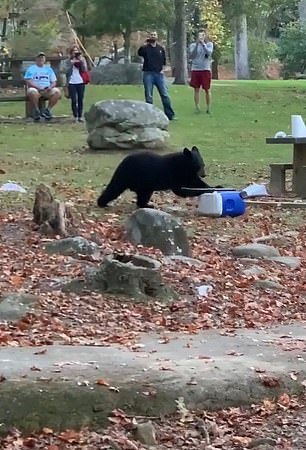 Footage shows the young black bear pilfering the cooler and pushing it away near the Roaring Fork stream located in the Great Smoky Mountains near Gatlinburg, Tennessee

The video, uploaded on Facebook on October 22, shows the animal sniffing about the picnic bench before the blue container catches its eye.

The bear knocks the cooler off the wooden bench as onlookers take their phones out to record the hilarious scene.

After trying to stand the container upright and open it, the bear gives up and devises a clever method of transporting the box.

It places its two front paws on the icebox and walks on its hind legs, pushing the object through the leaves.

The bear transports the chiller all the way to the foot of a tree before attempting to open his new stolen possession once again.

Users on social media were curious to find out if the bear finally got the cooler box opened. 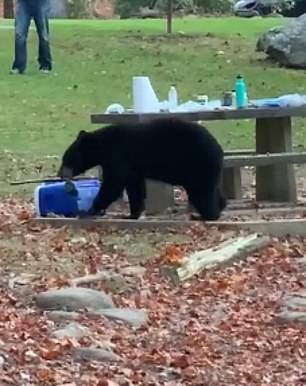 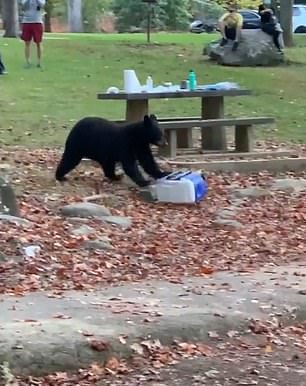 Josh Sansing, who uploaded the video commented: ‘He finally did and there was just a few cans and he left it lol.’

People also joked the animal was like the famous cartoon Yogi Bear who would often steal picnic baskets with his sidekick BooBoo.

One user wrote: ‘Reminds me of Yogi the bear going after a picnic basket.’

Another said: ‘Hey boo boo I found the picnic baskets.’

There are approximately 1,500 black bears in the Great Smoky Mountains National Park.

This is one of the largest protected areas in the eastern United States where the animals can live in wild surroundings.

Paramedic shows off his driving skills while weaving through traffic

The Stylish Face Masks Jennifer Lopez, Sarah Jessica Parker, and More Stars Wear Are 40% Off — but Not for Much Longer