A horrified tenant came home to find blood pouring through his bathroom ceiling after his upstairs neighbor suffered head injuries when he collapsed and died.

Adam Hockett, a US soldier living in Winnipeg, Canada, said the man’s body had lain undiscovered for several days until the blood started seeping down his walls and splashing over his sink.

But when he called the building management company he says he was mocked by a laughing supervisor who told him: ‘This isn’t my problem.’

He says the company only agreed to help after he posted gruesome images of the blood on Facebook.

Hockett said he knew immediately it was blood dripping through his bathroom ceiling when he got home on Saturday night.

He and the apartment block caretaker raced upstairs to check on his neighbor and called 911 when there was no response. Police and paramedics found his body in the bathroom after sawing through the chain lock on the front door.

Hockett said: ‘Out of respect of the deceased, I will forgo any details. But it was clear he had a medical emergency in the bathroom and must have hit his head in the process, which caused the massive bleeding.

‘And based on observations and opinion of the paramedics. He had been deceased several days.’ 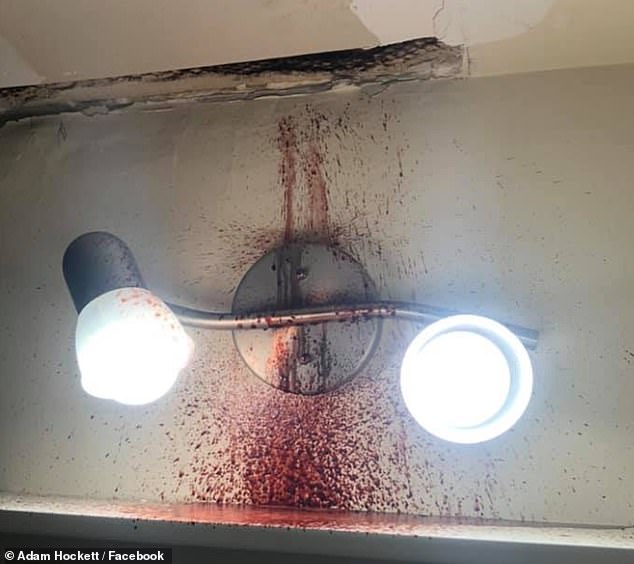 Adam Hockett, a US soldier living in Winnipeg, Canada, found blood pouring through his bathroom ceiling when he came home on Saturday evening 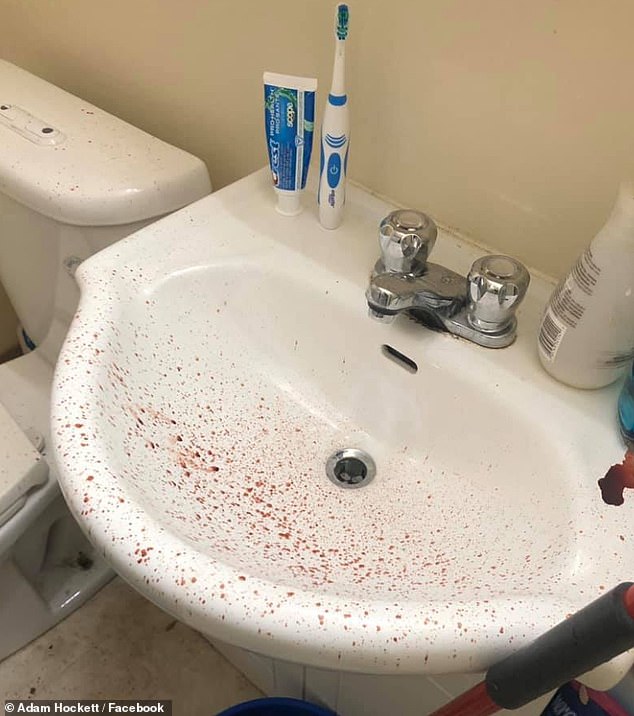 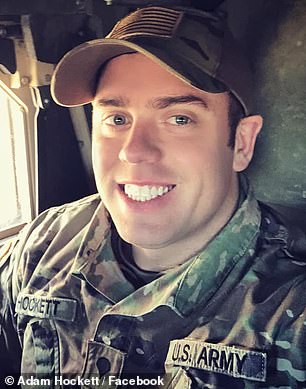 Hockett posted photos of his blood-drenched bathroom on Facebook after a row with the building management company Sussex Realty over who was responsible for cleaning it up.

He said he spoke to a supervisor who mocked him and ‘sounded very intoxicated.’

Hockett said in his Facebook post: ‘I explained how my bathroom was covered in blood and that I had no access to my facilities. And that my suite was overwhelmed by the smell of the deceased and all of the blood in my suite.

‘He kept talking in circles, refused to give me anyone else to contact, and kept telling me just contact your insurance it is not my problem. Or wait till Tuesday.

‘I asked him to please stop being so condescending and listen. But the supervisor just mocked me several times.

‘I explained to him that not only is it not feasible to live in that suite for 3 more days, without access to a washroom and just how unsanitary it was. I said it’s traumatic and is bringing back issues I had from being on scene when we lost a soldier in a very tragic accident 6 months ago.

‘His response was this. “You are a veteran, you should be used to this kind of stuff”. I asked him if he was serious. He said “call your vets up, they can find you a place to stay. This isn’t my problem.”

‘At that point I told him to F*ck off and I hung up.

‘The caretaker and I both agreed he sounded very intoxicated.’

Sussex Realty called him soon after his post, which has been shared nearly 5,000 times, on Sunday morning.

The company said in a statement that a professional cleaning company was sent to the apartment that morning.

The statement said the incident was ‘understandably traumatic to the resident in question and also for the friends and family of the resident above.

‘We extend our heartfelt sympathies to those involved.’

‘It took a lot of shares on social media for things to start changing around,’ said Hockett, who is staying with friends temporarily.

He told CBC News: ‘I hate complaining about it because a gentleman lost his life and I feel selfish even worrying about my issues because a life is way more important,’ he said.