Washington: The education of the star-studded class of House freshmen has begun.

Lesson one: Speaking with the bluntness of a candidate can produce swift and uncomfortable results.

Congresswoman Rashida Tlaib learnt that before lunch on Friday, when her profane remarks the night before vowing to impeach President Donald Trump drew almost no support, and plenty of pushback, from members of her party. 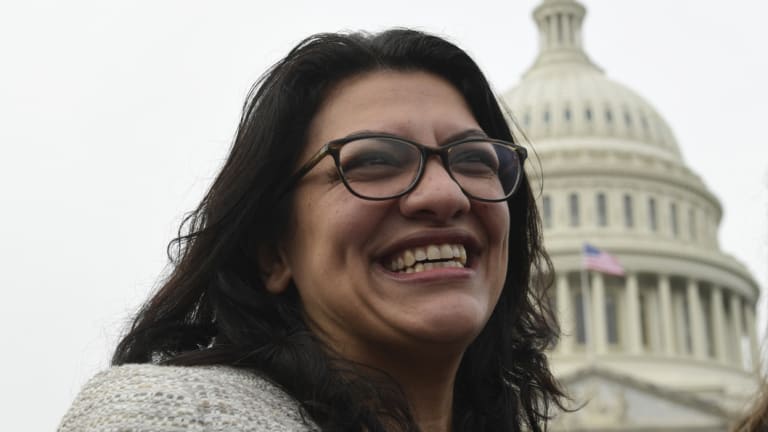 "It's been pretty intense," Tlaib, said as she reported to the House to face her colleagues.

Hours after Tlaib was sworn in as part of the history-making class of freshmen that helped flip the House to Democratic control, she ran afoul of the widespread sense among her colleagues that they should focus for now on health care and other policies rather than impeachment – at least until special counsel Robert Mueller's investigation concludes.

"We're gonna impeach the motherf—er," Tlaib exclaimed during a party Thursday night hosted by the liberal activist group MoveOn, according to video and comments on Twitter.

Not unexpectedly, President Trump has weighed in, saying Tlaib "dishonoured herself" when she used profanity to describe him.

Speaking to reporters in the Rose Garden, Trump said on Friday that he thought Tlaib's comments were "disgraceful".

It was a striking coda to the Democrats' heady ascendance to the House majority on Thursday, sparking unusually public corrections from House veterans.

"I disagree with what she said," said House Judiciary Committee Chairman Jerrold Nadler, New York Democrat, during a CNN interview. His committee would be the one to begin impeachment proceedings.

"It is too early to talk about that intelligently," Nadler said. "We have to follow the facts."

Newcomers routinely stumble as they learn how things are done on Capitol Hill. But Tlaib and her classmates have been celebrated in magazine profiles for their independence and their promises to stand up to the powers that be. By rebuking one, the more seasoned Democrats were effectively warning the others.

"I think some of our new members probably don't realise that you are always on, that when you are a member of Congress, there's always someone listening," said Illinois Congresswoman Jan Schakowsky. She said she hopes Tlaib's remarks aren't news for long.

Democrat Congressman Gerry Connolly served up a reminder to the new members that seniority rules in Congress.

"She's a freshman. It's her first day here," Connolly said of Tlaib. "She went in front of an enthusiastic crowd of her supporters and it was red meat for them. She yielded to that temptation."

"I'm sure upon reflection," Connolly suggested, "she might choose other words to describe her feelings."

Tlaib wasn't the only freshman who got a lesson in how one comment can upend Capitol Hill.

Some of Tlaib's classmates were pursued for reaction – standard results when a political ally says something that raises eyebrows.

"I am not talking about those things," laughed Virginia Congresswoman Abigail Spanberger when asked on Friday to respond to Tlaib's remarks.

She said she was elected because she talked about preserving health care.

"I'm not going to tell anyone else what to do, but certainly, I think, it would behoove all of us to really be working for the people who need Congress' help," Spanberger said.