A Boeing 777 airliner on Friday made an emergency landing in Moscow with engine problems, the operating airline said, six days after another model rained down engine debris over the United States.

Russia’s state-owned Rossiya airline said the crew had registered the ‘incorrect operation of the engine control sensor’ on a cargo flight from Hong Kong to Madrid and ‘decided to make an emergency landing in Moscow.’

Online flight trackers confirmed the flight was carried out with a Boeing 777.

The airline said the unscheduled landing went ahead without incident and that no one was injured. The plane was due to continue its onward journey to Madrid after a delay of several hours, it added.

The incident came just days after Boeing confirmed that dozens of its 777 aircraft were grounded globally resulting from the engine of a United Airlines plane catching fire and scattering debris over a suburb of Denver, Colorado. 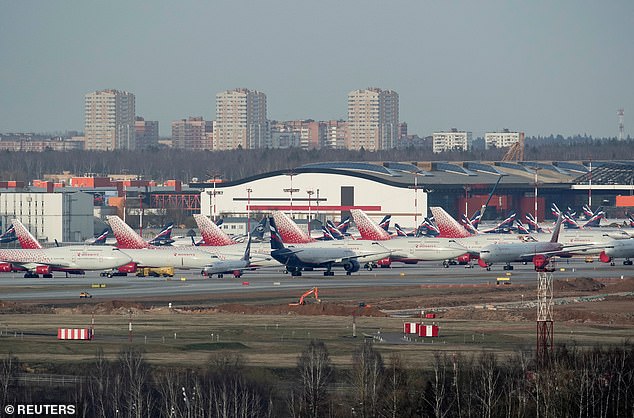 Pictured: Planes of Aeroflot and Rossiya Airlines are seen parked at Sheremetyevo International Airport (file photo). Boeing 777 airliner operated by the airline on Friday made an emergency landing in Moscow with engine problems

Rossiya told AFP later Friday that the Boeing 777 that made the emergency landing in Moscow was fitted with a different make of engine to the plane that shed engine parts in the United States last week.

The Rossiya aircraft was fitted with General Electric’s GE90-115B engines, according to the AirFleets website, while the United Airlines jet that shed parts of its engine over Colorado was fitted with Pratt & Whitney PW4000 engines.

‘During the cargo flight No. 4520 Hong Kong – Madrid an incorrect operation of the engine control sensor was revealed,’ Rossiya Airlines said in a statement retorted by The Independent.

‘The base airport of the Rossiya Airlines – Sheremetyevo International Airport (Moscow) – was on the route.

‘The crew of the plane requested to make the emergency landing. The landing took place normally,’ the statement said.

‘The aircraft will continue the flight to Madrid after 12.00 Moscow time on 26 February 2021,’ it confirmed.

Pictured: The engine of United Airlines Flight 328 on fire after experiencing a ‘right-engine failure’ shortly after takeoff from Denver International Airport, Saturday, February 20, 2021

When contacted for comment, Boeing directed the MailOnline to Rossiya airline’s press office. General Electric have been contacted and are yet to respond.

The United Flight engine failure was a fresh blow for the beleaguered US aviation giant that was forced to ground another fleet of planes after a series of deadly crashes.

Malfunctions in engines are not uncommon and most airplanes are designed to be able to fly for several hours on one engine until crew identify and land at the nearest available airport.

Investigators have attributed the Denver incident to a fan blade that broke off soon after takeoff due to metal fatigue and debris that breached the engine cover, known as a cowling.

On Thursday, it was reported that Boeing had been working to strengthen engine covers on the 777 for two years before the United Airlines flight. 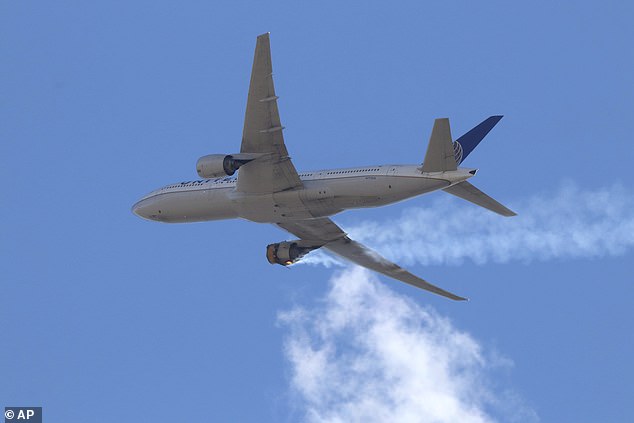 Pictured: United Airlines Flight 328 approaching Denver International Airport, after experiencing a ‘right-engine failure’. Investigators have attributed the Denver incident to a fan blade that broke off soon after takeoff due to metal fatigue

An internal FAA document reads: ‘Boeing has decided to redesign the fan cowl instead of trying to modify existing fan cowls to address both the structural strength concerns.’

While no one was hurt in the incident, the episode raised questions about maintenance on the jets. Broken fan blades should be contained by engines and their protective covers.

The planemaker and the FAA had been discussing potential fixes for about two years, following an earlier incident in 2018, according to the Journal.

On Tuesday night, the FAA ordered inspections of all Pratt & Whitney engines similar to the one that broke apart. The National Transportation Safety Board is also investigating. 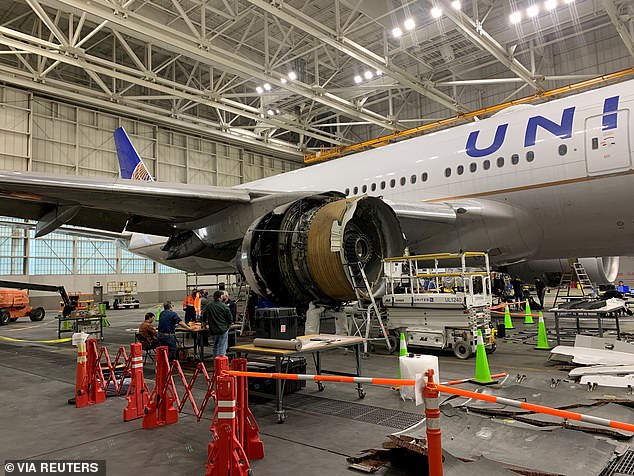 On Thursday, it was reported that Boeing had been working to strengthen engine covers on the 777 for two years before the United Airlines flight

Although immediate attention has focused on the engine’s manufacturer, Pratt & Whitney, Reuters has reported that its cowling  is manufactured by Boeing.

Both Boeing and the FAA avoided discussing specifics on the efforts to modify the 777. Such changes typically require significant evaluation and testing.

The damaged-blade theory is reminiscent of a 2018 disaster on board a Southwest Airlines flight, when a broken fan blade triggered an explosion that smashed a window, killing a woman who was blown outside.

The same year, another United Airlines Boeing 777 suffered an engine failure that caused parts of the housing to break off and fall into the Pacific Ocean as the plane flew from San Francisco to Honolulu.

Boeing’s reputation was battered by two deadly crashes in 2018 and 2019 involving its 737 MAX aircraft.