Boris Johnson today hit back at critics for attacking him over leaked texts to Sir James Dyson as the Prime Minister said there was nothing ‘remotely dodgy’ about his conversation with the billionaire.

Mr Johnson said people claiming the texts were evidence of ‘sleaze’ are ‘out of their mind’ and insisted it was right for him to do everything in his power to try to increase the UK’s supply of ventilators at the height of the pandemic.

But Labour leader Sir Keir Starmer has renewed his attack on the PM amid a wider row over lobbying in Whitehall as he claimed there is a ‘deep sense now that it is one rule for them and another rule for everybody else’.

Mr Johnson’s comments came as he prepared to publish the communications in full in an attempt to cool the ongoing lobbying row. 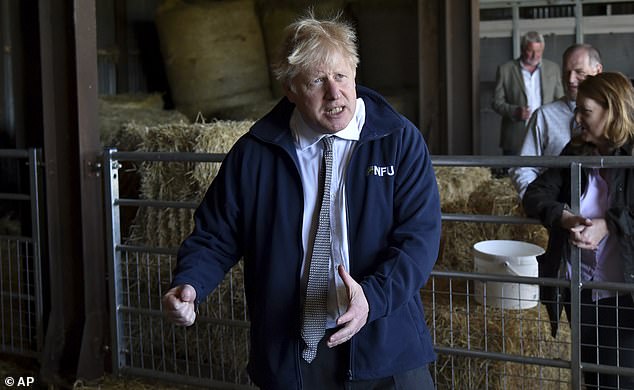 The Prime Minister has faced questions over when he would publish his correspondence with Sir James after promising to do so under pressure in the House of Commons this week.

Asked when the information would be released, Mr Johnson said this afternoon: ‘Indeed. I think that is happening today.

‘Let me tell you, if you think that there’s anything remotely dodgy or rum or weird or sleazy about trying to secure more ventilators at a time of a national pandemic and doing everything in your power to do that, then I think you are out of your mind.

‘When you’re facing a pandemic and you’ve got 9,000 ventilators as we had – that’s all we had – and, to the best of our knowledge, putting people on ventilation was the only way to help people who are really in difficulties with Covid, of course it was right to get the best of British manufacturing together as we did with the ventilator challenge.

‘To say to them ‘come on, we’ve only got a few days now, see how many ventilators you can build’ – and in the end, they came up with 22,000 more ventilators and it was actually described by the Labour Party and by our opponents, when they were using some common sense, as a benchmark for public procurement.

‘I also think it was completely the right thing to do.’

But Sir Keir claimed it is ‘increasingly obvious that the Prime Minister Boris Johnson himself has been involved in this privileged access’.

Speaking during a visit to Hartlepool, the Labour leader said: ‘What we are getting from the Government day after day is sleaze, sleaze, sleaze, allegation after allegation and I think there is a deep sense now that it is one rule for them and another rule for everybody else.

‘We have got to get to the bottom of this. We can’t have daily allegations.’

Downing Street launched an internal inquiry led by the Cabinet Office into how messages between the Prime Minister and Sir James were leaked to the BBC.

The Times, The Telegraph and The Sun all reported comments from an insider naming Mr Cummings. Allies of Mr Cummings have denied he is behind the leak.

Russia isn’t the only one: U.S. also trains marine animals with its navy

Lil Huddy’s "America’s Sweetheart" Is About Charli D’Amelio, & He Admits It – EXCLUSIVE